I have missed the rich, detailed textures of Vikings. I have missed the wide, sweeping shots of incredible scenery. I have missed the many attractive people on horseback and in peril. “A Good Treason”, the fourth season premiere, featured all of these things in the first few minutes, and I am glad that I don’t have to miss them any more.

Much has changed since the end of the last season, and this first episode spent a lot of time catching up the audience as well as setting up new drama. Rollo is married officially to the Frankish princess; Ragnar wakes from his injury-induced coma; Bjorn, at odds with his father and abandoned by the mother of his child, finishes the episode with a trip into the wintery wilderness to test his masculinity via his survival skills. Meanwhile, Kalf splits his power with Lagertha back in Hedeby and Aslaug schemes to set herself up as the woman who will rule in Kattegat from the Seer’s prophesying. 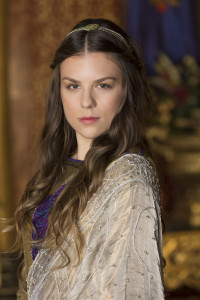 Despite my wikipedia’d knowledge of the historical figure of Rollo, I was still hoping the fictional version’s defection to the French at the end of season 3 might all be a ruse. Instead, it seems Rollo has pit himself against his people and his brother. Again. I mean, how many times can you murder your own before your kingly bro decides you have to go the way of the dodo? I have not been Rollo’s biggest fan since he raped a slave girl back in season one, but I can still appreciate his decision not to do the same to his new wife, Princess Gisla. I would like to call it character development, but considering Rollo is back to grasping at power and damn the moral consequences, I have a different theory. I think Rollo and Gisla’s wedding scene is a subtle dig at “Game of Thrones,” as if to say, “see? a wedding night does not have to end in violence.” Regardless, the scene was funny and a maybe even a smidge sweet, and I am admittedly excited for what shenanigans Rollo and Gisla’s romance might sow as this season moves forward.

Back in Scandinavia, Lagertha wears a flowing blue dress and has really fabulous hair and does some horseback riding. An activity I must reiterate is a favorite thing of mine to watch attractive people in costumes do. As attractive people in costumes go, Katheryn Winnick’s Lagertha is high on my personal list. One of the regular problems with “Vikings,” however, is that I care a lot more about Lagertha’s earrings than I do about what is happening to her right now in the plot. Hedeby and its politics have never been worthy of the best character in the series, and Kalf is a bland love interest, at best. Lagertha deserves better (although she would probably be okay with castrating more men with bad moustaches if she was allowed the opportunity).

I wonder if the rather gratuitous slaughter sequences were necessary, or if they were getting a jump on this season’s massacre quota. I did appreciate the cinematic parallels between what was happening outside Paris versus Hedeby. Along with Lagertha’s dress, crossbows were the real MVP of this episode. 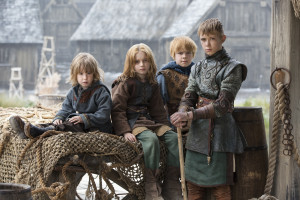 It was great to see Bjorn retain his confidence despite losing Pojunn, and better still to see him take on a leadership role in his father’s absence. I hope we get to follow his manly exploits into the wilds, and that Alexander Ludwig can flex his acting chops beyond the love story that kept him occupied last season. I also liked the Lothbrook Son Bonding Time all over “A Good Treason,” especially over the looted map of Europe. Bjorn calls it his “destiny,” foreshadowing once again that his deeds might one day be greater than his father’s.

Speaking of our favorite farmer turned king, Ragnar prowled about Kattegat like a restless wounded wolf. He came back from Paris with treasure and titles unknown to vikings before him, yet he remains rejected by the Gods themselves. I do not fear for Ragnar’s life, he is the main character and lifeblood of “Vikings”–but I do wonder how deep into madness he will go before he finds himself again. He is conspired on by his wife, abandoned by his eldest son, and betrayed by his best friend. And news of Rollo’s treason has not even reached him yet!

Floki, Floki, Floki. Finally in chains for what he did to Athelstan. For a while now I have theorized that the intensity of Floki’s feelings were spurred by a hopeless unrequited crush on his bff. I can’t blame him, Ragnar is obviously a babe, and a confirmed bisexual to boot. “A Good Treason” only increased the validity of that theory, since they named aloud the feeling that caused Floki to kill the priest: jealousy. It is at this point of irreconcilable differences in which Floki and Ragnar have never before had so much in common: they are abandoned by their friends, their families, and their Gods.

Even though I am a bit leery that they added four episodes to this season’s line up, I can’t wait to see what the rest of what season 4 has to offer.

Vikings airs on the History Channel on Thursdays at 10/9c.

Previous:Extraordinary X-Men #7 Review: Search and Rescue – Part II
Next: X-Men inspired ‘Legion’ and ‘Hellfire’ coming to TV! What we know!