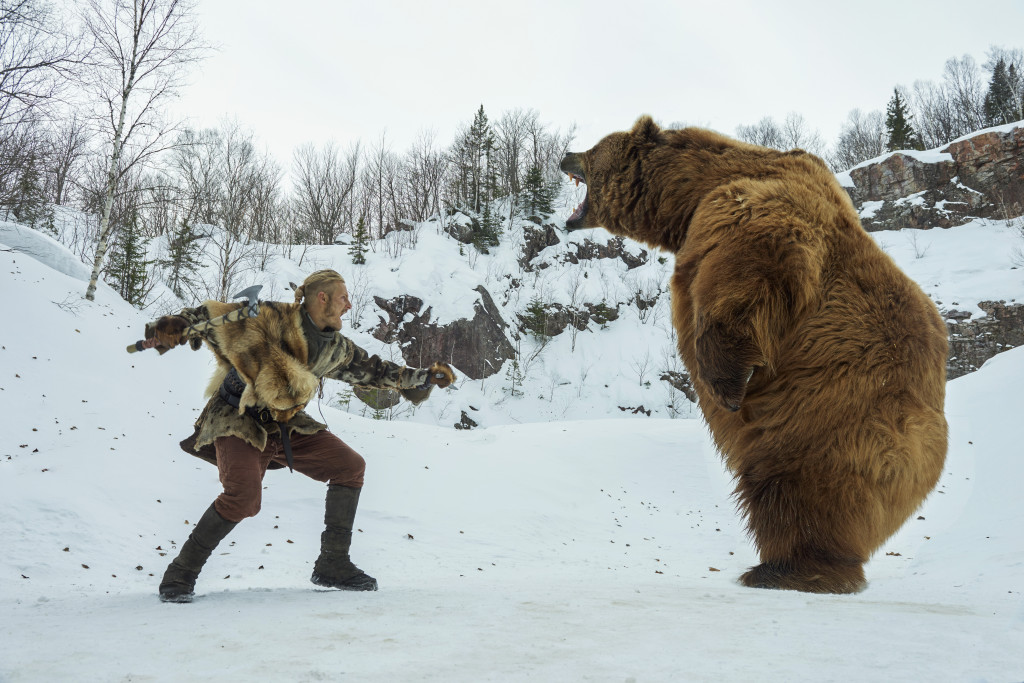 If I were in charge of Vikings, I might have re-titled “Mercy” to “Mercy from Men Yelling.”

It is probably a good thing I’m not in charge of Vikings. 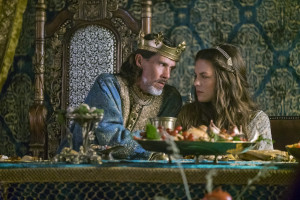 “Mercy” is the weakest episode so far in season four. I fear my predictions about extending the season by four episodes are coming true. Plotlines are already being stretched out beyond their natural limits of viable storytelling (are we going to actually learn anything about Yidu, or is she going to blush at Ragnar for a bit longer?) or just plopped in there for the sake of giving the characters something to do (like all of Sad Cold Teen Survival Skills with Bjorn).

Seriously, Bear vs Bjorn has been hyped and hyped and hyped in all the promos and it was… terrible. All season we’ve been waiting for it. All episode they teased us about it. And then it was just… the bear mauls him and Bjorn barely gets scratched! The bear sits on top of him and Bjorn manages to fight back anyway, lungs and ribs miraculously uncrushed. He just hacks at the bear from underneath it until it’s like “okay, two hundred pound human with a pointy stick, you win! Dunno why I haven’t been using my teeth or claws, but I guess considering you barely reacted after I tried to smash in your face, it makes sense.” And then we got the gore quota as Bjorn drives his axe into the poor beast’s brain, blood spattering onto his face. It wasn’t even self defense! Like I get it; the bear is a metaphor for Bjorn’s daddy issues. But that bear did not deserve to die, especially in such a disappointing scene.

And after, as Bjorn drops bear-trow to jump into his fishing hole (because… reasons?) and then emerges from the icy waters and screams to end the episode? Why? Is this a coming out narrative metaphor? “Young boy dates older experienced man (Bjorn and his bear); discovers he’s a bottom after all (Bjorn embracing his ice hole)” ? 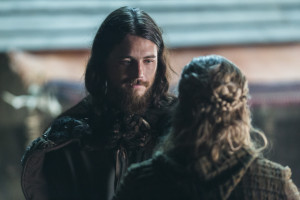 “Mercy” also began with screaming, of two varieties. First, Floki wails as water drips onto his head, still tied up in Sisyphean agony (we get it, he’s Loki, we know). Then it transitions into Lagertha giving a half-hearted orgasm on top of Kalf, who was playing the role of “overattached girlfriend” as Lagertha awkwardly tries to have sex again instead of telling him how bland and terrible and undeserving of her he is. But surprise! Turns out Kalf was scheming to off Lagertha after all… even though he helped her dispose of powerful enemies in “A Good Treason” two episodes ago, I guess? At any rate, with the introduction of the assassin “Beserker,” it’s almost like my barbarian OC has come to life! He’s old n’ wiry, a true Discworld-style fella, who can knock a princeling out with just his breath and bad teeth. I can’t wait until Lagertha stabs him in the dick.

We also got a Frankish feast scene in “Mercy,” which I thought was a neat juxtaposition from the normal uproarious and fun-filled feasts thrown by Ragnar and co. Plus, with the nobility of Paris, we get a more elegant sampling of the rich textures that sets Vikings above the rest in the costume design department. But none of that helps Rollo–poor (?) Rollo, who at least is learning to style his new terrible hair cut, but can’t get his wife to like him even a little. He ends the scene with (you guessed it) yelling. He’ll never fit in with these prissy French folks, and even when he tries, like the language-learning scene–he doesn’t succeed. I will say that Rollo mocking a French accent is one of the funnier things I’ve seen on this show, and there’s something comforting about seeing him revert to belligerence instead of simpering to get into Gisla’s good graces. Rollo’s always going to be an ass. I’d rather he be so in an overt manner; it’s much more fun to watch.

In Wessex during “Mercy,” Diet Athelstan is regretting teaching Judith how to paint the sacred texts, and that is the least offensive thing about this plotline right now. Am I seriously supposed to cheer for Ecbert x Judith? That is a pairing where “he’s her father-in-law” is the third creepiest thing about it. At least Aethelthrithe (Kwenwulf?) has set sail, just like I thought it would. 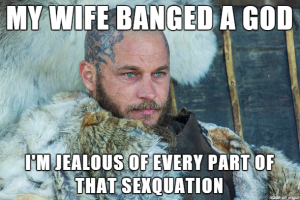 Yidu and Ragnar officially interacted in “Mercy”, which, okay. I know Ragnar is going to have sex with her, and I never want to discourage two hot people from getting it on. But why does Ragnar get Yidu and Lagertha gets Kalf? I mean. (Lagertha x Yidu is what I mean.)

Ragnar’s half of the Athelstan cameo was simply divine; the imagery of Athelstan kneeling at his throne, washing Ragnar’s feet was charged with sexual energy as well as being a harsh reminder of the consequences of Ragnar’s hubris. Although I did appreciate the parallels to Ecbert–conquering kings, varying degrees of tyrant and asshole, with crushes on pansexual traveling monks–I had to wonder: why not Judith? Why not Athelstan’s canon love interest and baby mama?

“Mercy” ends with Ragnar freeing Floki from his torture. I do not think this means Ragnar has forgiven Floki, by any means–but I’ll be interested to see what place Floki has in Kattegat now that everyone knows what he did to Athelstan.

Previous:Release of new Ghostbusters Trailer Causing a Buzz on Social Media
Next: The 100 3×7 Review: Thirteen