What Your Favorite “Steven Universe” Ship Says About You

In the oft-barren wasteland that is the femslash fandom, one show rises like an oasis above the sand: Steven Universe.

There are so many ways to ship ladies with ladies in this show that there was a recent episode in which a character makes a shipping chart, an incredible meta joke about their own characters and the show’s audience. So what, exactly, does your favorite Steven Universe ship say about you? 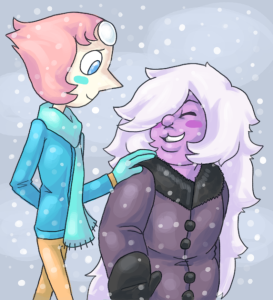 Pearl x Garnet (Pearlnet): You have been watching Steven Universe since the early episodes. You love low-key relationships bound through time and history; the kind which come easily, even if they’re nothing without their fumbles. You are super, duper gay.

Garnet x Amethyst (Garnethyst): Your fashion sense is a confusing combination of “I could kill a man with my eyeliner” and “these are my least dirty jeans.” You love Nicki Minaj. You appreciate nice mass more than most.

Garnet x Pearl x Amethyst (Polygems): You love Steven Universe so, so much. You want all of these darling space rocks to be inundated with love. You don’t understand why we have to bother sticking gayliens in monogamous relationships, and you would really like a snuggle pile. 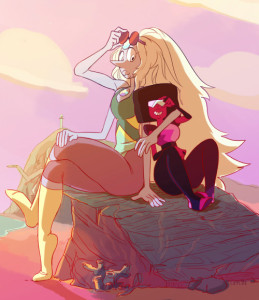 Opal x Garnet (Opalnet): Same as above, except you like monogamy, especially pairings where both characters constantly want to make out with themselves.

Lars x Sadie (Larsadie): You are steadfastly loyal, even in the face of common sense. You’re a sucker for RomCom tropes, and hold out hope that any couple can eventually work through their problems. You’re probably a Hufflepuff.

Sadie x Kiki Pizza: You recognize that nine times out of ten the femslash pairing with no canon basis is the superior shipping option. 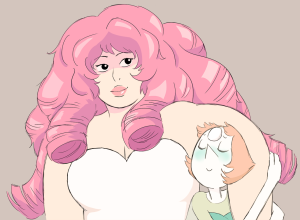 Pearl x Rose Quartz (Pearlrose): You are a socialist. Probably a gay socialist. You love rich complexity in your relationships, and you can read the same fanfiction tropes over and over again and never get tired of them. These include angst, fluff, and hurt/comfort (hopefully all three).

Amethyst x Peridot (Amedot): You are a nerd who wants to smooch Amethyst. You are a sucker for high school AUs. Ironically, you are Yaoi trash, but you love the Magical Girl genre too. You are affected by the show’s hiatuses more than the rest of us.

Amethyst x Vidalia: You identify on a personal level with Bowling for Soup’s “1985.”

Peridot x Ronaldo (Perinaldo): You identify on a personal level with Thomas Dolby’s “She Blinded Me With Science.”

Ronaldo x Lars: Much like Steven himself, you believe in the healing power of friendship. You are probably a social misfit and you are really kind in your head, even if that doesn’t always translate to how you treat others.

Jamie x Kevin: You are desperate for an m/m slash pairing in this show and think these two are better for each other than Ronaldo and Lars. 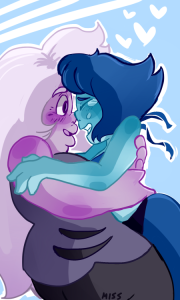 Amethyst x Lapis Lazuli (Lapithyst): You are a femme who wants to smooch Amethyst. You love pranks. You also want these darn sad rocks to just be happy for once, dammit.

Pearl x Lapis Lazuli (Pearlapis): You would like to smooch both Pearl and Lapis. You also would like to see the two of them dancing, and again, sad rocks, please be happy. You are all about #Aesthetic.

Greg x Jasper: You earnestly believe everyone deserves a chance at love. You think love is what brings healing to people in the face of grief. You might also actually be Steven Quartz Universe.

Pearl x Peridot (Pearlidot): You are a nerd lovin’ nerd. Ya nerd.

Garnet x Peridot (Dotnet): You are easily distracted by new, shiny toys. You like pairings that come to be through lots of active attempts at understanding each other. You like it when one person can pick up the other person like the cat she is.

Steven x any of the original Crystal Gems: Go to church.

Pearl x Blue Pearl x Yellow Pearl (Pearlshipping): You were voted “most likely person to be caught running through a city, waving a banner while shouting ‘VIVA LA REVOLUTION!’”

Pearl x Jasper (Jaspearl): Beauty and the Beast is probably a high contender for your favorite Disney film. You have a thing for chicks who know their way around a battlefield. 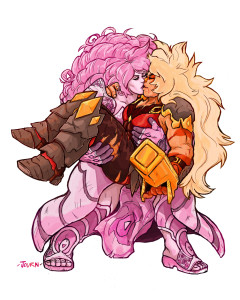 Lapis Lazuli x Jasper (Jaspis): Maybe you like exploring the dark tragedy of unhealthy relationships. Maybe you harbor hope for folks getting past their own mistakes, and growing to be better people. Maybe you sincerely don’t understand how seriously twisted this pairing is.

Jasper x Peridot (Jaspidot): As Peridot is the most relatable character on Steven Universe, you ship this as a self-insert for wanting to smooch Jasper. This means you are gay. Also, you are weak-kneed for “tall and smol” pairings.

Pearl x Dr Maheswaran: You probably should be less restrictive in your parenting style.

Garnet x Jasper: You have a kink that involves getting pushed around by women who are stronger than you.

Greg x Rose: You watch this show because your kids love it, and you love how wholesome all these gals being pals are. But then you catch yourself thinking about Steven Universe before you go to sleep, and how you totally get that Greg would give up his whole world for an ancient alien warlord if she had hair and lips like Rose had and… congrats! you caught the gay.

Connie x Steven (Connverse): You are a precious cinnamon roll who believes in soulmates. You are in great company, since Garnet is this ship’s #1 fan. You wish you had a relationship in middle school, platonic or otherwise, like Steven and Connie have.