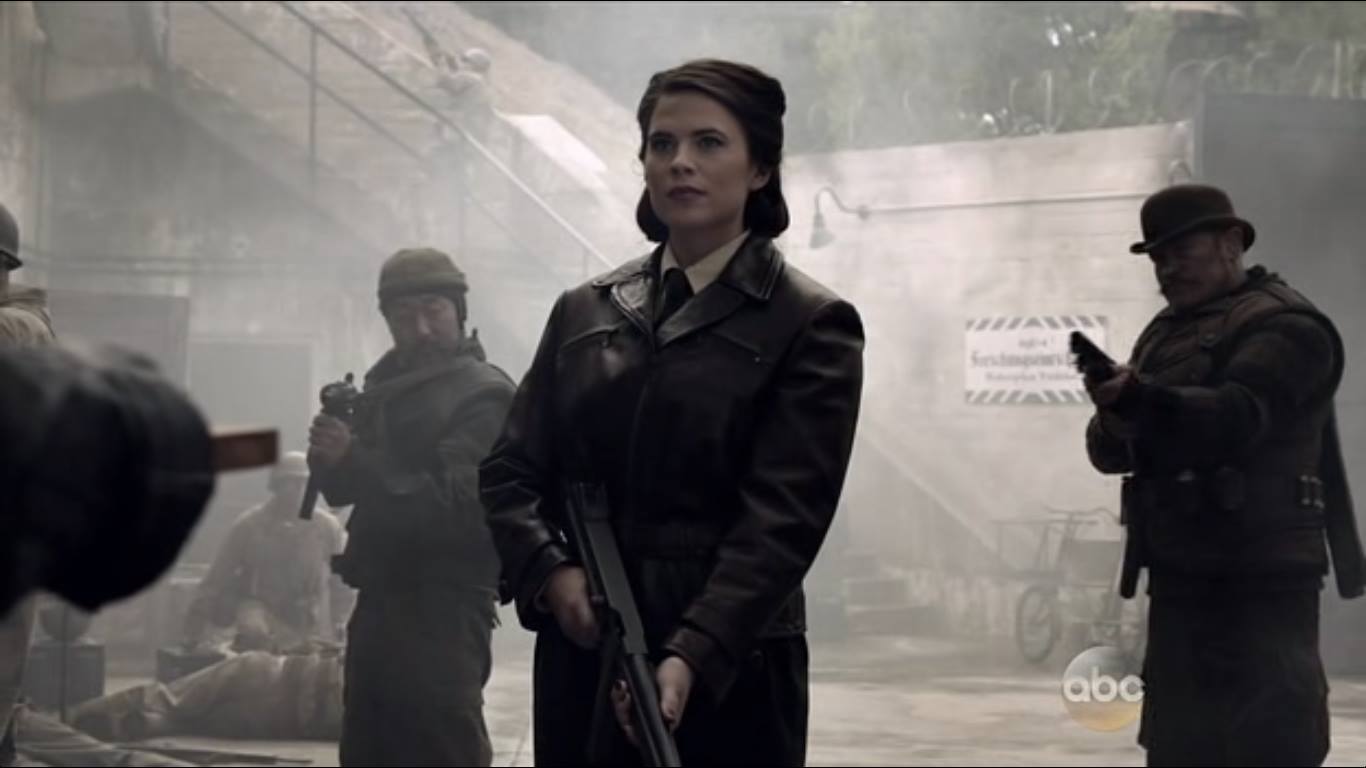 The episode opens with a general recap of last season as well as the events of Captain America: The Winter Soldier before we’re thrust into Austria in 1945 at a HYDRA base. The lead HYDRA agent, Herr Reinhart, portrayed by the wonderful Reed Diamond (seriously, he gets around on television, but not enough for my tastes, he’s such an excellent actor).

HYDRA is packing up their base as Allied Forces are closing in, as they name check Red Skull. It is then we see the mysterious artefact of the week. It is referred to later in the episode as the “original 084”. They are careful not to handle it as there are a few mysteriously charred corpses in partial view, as it may “hold the answer to death itself.” Sunddenly the exterior doors burst open and we are greeted by a well-armed Peggy Carter (Hayley Atwell), Dum Dum Dugan (Neal McDonough), and Jim Morita (Kenneth Choi) flanked by soldiers. Despite the obvious wig on Atwell, and the fact their appearance was leaked already, it was still exciting to see them. Sadly, none of the other Howling Commandos appear. 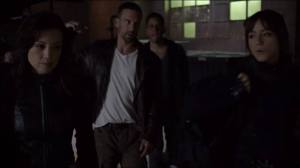 The soldiers start packing up the artefacts and stamping them with SSR labels and numbers (where the term 084 originates as the item is labelled as such). Dugan lifts a box while questioning Carter about the destination of all of the boxes, we a see a glimpse inside and see the blue humanoid from the T.A.H.I.T.I. project last season.They name check Howard Stark mentioning how he toys with these things that are better off never seeing the light of the day. Carter mentions how a peace time unit should be established, which hints at the upcoming Agent Carter series.

After the commercial, we are in present day Alexandria, VA and are greeted by Agents May, Tripplett, and Skye, who are monitoring an exchange involving the lovely Lucy Lawless as Isabelle Hartly. She is buying intel from an ex-S.H.I.E.L.D. agent (Matthew Glave). The item in question is a Level 10 classified file of the silver box holding the original 084 from the episode teaser. Suddenly Hartly and her team of mercenaries (portrayed by Nick Blood and Wilmer Calderon) are attacked, by a third party, and back up comes to their rescue in the form of May, Tripp, and Skye. Unfortunaley the assailant, after being shot repeatedly makes a 20 foot drop and disappears. Hartly then calls Coulson who tells her to go dark.

See briefly at the end of last season, the team reconvenes at The Playground. On one of the various televisions, we see Brigadier General Glenn Talbot (Adrian Pasdar) and George Stephanopoulos discussing the HYDRA and the dismantling of SHIELD. It is there we meet Alphonso ‘Mac’ Mackenzie, who in the comic books was once the C.I.A. liaison to S.H.I.E.L.D. The team signs in with their laminates. The two men with Hartly are Idaho and Lance Hunter, the former of which was featured in Captain Britain comics as a Royal Navy Commander who later became the Director of S.T.R.I.K.E. (the UK version of S.H.I.E.L.D.).

They are greeted by Billy Koening. Most consider him an LMD (the original most likely Eric Koening, a member of Sgt. Fury’s Howling Commandos in Marvel Comics). Patton Oswalt will also be portraying Sam Koening later in the season. Telling them that the director wants to see “just Agent May”. It turns out he’s been travelling quite a bit, and even though Coulson is in charge of S.H.I.E.L.D., it’s May who’s in charge of him. She asks after his health, and he makes a crack at flying economy for recruiting purposes. He’s been away gathering allies and is off again, until he is shown that the item in question is the original 084.

After a few scenes we are finally granted a look at Fitz and Simmons after the events of last season. Fitz is a bit despondent at first, not acknowledging Simmons. He finally comes around, but he is not the same. He is forgetful, shaky, and very flustered. He is working on cloaking technology, but it’s going slower than he would have liked. Simmons is very caring and patient with Fitz, even putting a gentle hand on his shoulder. It looks like something is between them… In addition to working on the cloaking technology, he also is given a metal shard that broke off from the mystery man, it starts to bleed and morph into human skin. Turns out it is Carl Creel, the Absorbing Man, who was listed as dead by John Garrett.

Skye and Tripp discuss the strange language that Coulson and Garrett were writing last season. She still hasn’t decoded it, but Coulson arrives and asks her to go downstairs in the old SSR base to Vault D. It’s behind an internal confinement laser barrier that we see Grant Ward. He seems quite docile, and accepting of his situation. He tried to talk to Skye, but she only wants information from him, not apologies. We see Ward’s wrists, he’s cut himself and attempted suicide several times in the past, but all he wants to do now is help. He divulges that HYDRA communicates using the “white noise in the gaps of S.H.I.E.L.D.’s Quantum-T frequencies”. Skye turns and leaves, putting up a solid barrier (which is conveniently soundproof) before Ward can tell her he knows more… about her father. Turns out Ward was telling the truth and a HYDRA hot spot shows up, but it’s not the only one. Soon loads, at least three times the amount of SHIELD allies pop up everywhere. To quote Matt Fraction’s Hawkeye, “okay, this looks bad”.

Talbot is out with his family when he gets a brush pass from Tripp, suddenly a phone starts to ring. He pulls it out and it’s COulson on the other end. He informs Talbot that both he and his family are in danger, but the Brigadier General takes it a threat. After Talbot snaps the phone in half, he is attacked by Creel. Before anything happens, in swoops May. Creel is subdued by Talbot’s men (with tazers) as May slips off. The old soldier switch happens as Talbot is led to a SHIELD car rather than his own. Coulson has May kidnap him for his own good and tie him up in their “honeycomb kill room”. 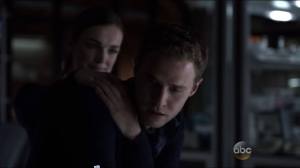 Coluson and Talbot argue, obviously they are trying to get him to talk and get his fingerprints for future use. Fitz is standing just outside the room, visibly upset as he is sidelined. Since Simmons actually uses an American Football metaphor to cheer Fitz up, he tells her that a head trauma joke would be in severely poor taste at the moment. Koening seems to have taken his place as the new “golden boy”. Simmons is there again, offering caring words and touches, as well as a longing look or two – they are so sweet. He tells her that he only feels like he’s getting better when he talks to her.

Eventually, we cut to the facility that Talbot keeps all the confiscated materials and weapons, after the team has snuck in, Coulson using voice modulation akin him sound like Talbot. By this time, Creel has already broken out of his cell on the base. May, Skye, Tripp, Hartly, Idaho, and Hunter all comb the warehouse housing S.H.I.E.L.D. artefacts for the 084. Hartly finds it, but is confronted by Creel. She picks up the object to use on him, but she starts to “char”.

Creel flees, but alarms start going off. Skye calls Coulson to see whether they abort. It turns out there were there for more than just the 084 – then came to steal a quintet! Tripp and Skye fly off with it while May takes a motorcycle. Coulson is tells Mackenzie how their only option was to steal a quintet for it’s cloaking technology since they need it to disappear in order to survive. They need to “live in the shadows to save people even when they don’t know it [and] don’t want it.” He knows that as Fitz is lost and his mind is gone. It turns out he’s broken further since Simmons left. Yes, the Simmons we have seen, all caring and loving, is a figment of Fitz’s imagination! She thought he’d do better without her. Oops! Fitz has been talking and muttering to himself, holding his own shoulder and not Simmons’s hand. This was an excellent plot twist. I seriously loved it, despite hoping there was something developing between the two of them. Meanwhile, Hartly and her team take the SUV they came in, and she tell Hunter to cut off her arm because the artefact is killing her. Unfortunately, they are attacked by Creel. Hartly and Idaho die, while Hunter feigns death. Creel absorbed the tyre rubber and makes off with the 084.

The short scene after the “stay tuned” bit, is two men discussing how Creel is on his way with the item. Then one of the men turn, he is Dr. Whitehall, who we have seen previously in 1945 ad Herr Reinhart. Yes, Reed Diamond is still alive and looks like he will be the main villain of the season. In the comics, Daniel Whitehall was a HYDRA agent known as “The Kraken”.

Ultimately, this episode started off the season quite well. It was really exciting to see the new evolution of the team. There were a few heartbreaking moments, mostly executed by Fitzsimmons, but all in all, it looks like things are definitely picking up this season for Marvel’s Agents of S.H.I.E.L.D.