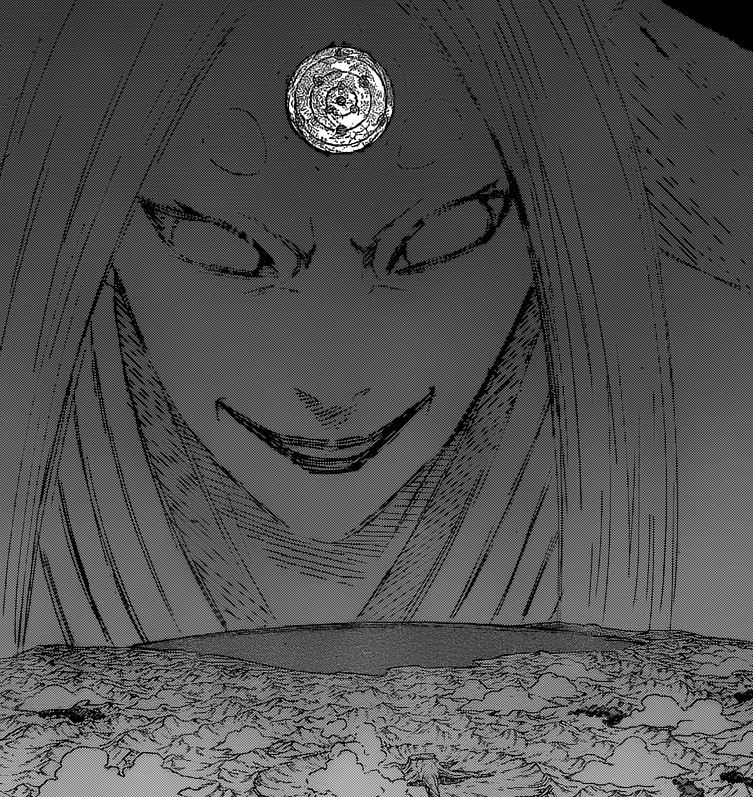 This week’s manga issue showed the effects of Madara’s Infinite Tsukuyomi attack, and Kishimoto greatly reducing the number of active ninjas on the battlefield. We also got to know what the rest of the Allied Shinobi Alliance had been doing. To my surprise, we saw TenTen, and to no one’s surprise, Sakura was left unnoticed. Let’s begin!

It was revealed the Shinobi Alliance was busy fighting the Gedo Statue the whole time. I have to hand it to the Tsuchikage. Even at his old age he kept on fighting. The Alliance managed to make the statue fall down, and they all felt the Earth shake because of Madara’s boulder attack. White Zetsu noticed the activation of the Infinite Tsukuyomi and decided to leave the battle against the Alliance because as far as he was concerned, Madara had won. A lot of panels showed the reactions of different characters when they saw boulders falling from the sky, and it was funny that no one saw the God Tree being cut down until this issue. Shikamaru went on to mention how the chakra Naruto gave them had vanished as well. I couldn’t believe it, Shikamaru, one of the smartest ninjas in the world hadn’t noticed the God Tree disappearing when Naruto cut it with his new Rasengan technique. His character has been wasted most of the war. I used to wait for an amazing plan from him, like he always gave in the series, but I’ve since realized it’s never going to happen.

Sasuke, realizing the danger, flied back to the ground, breaking a boulder on his way. Naruto showed another new Rasengan technique, this time, more powerful Rasenshurikens! Yes, all he knows is the Rasengan and different ways of using it. Sakura and Kakashi sat next to Naruto while he threw his attack at the boulders. Wasn’t Sakura talking about not stepping back last issue? Sigh! I guess she’s not going to make Naruto throw her at one of the falling boulders and break it with her super punch.

The best part for me was TenTen. I’ve missed her character. I also like her because when it comes to her, we don’t have to worry about unnecessary flashbacks that take up space. She seemed to have stored the Sage of the Six Paths tools on one of her scrolls and thought about finding someone from Kumogakure (Hidden Cloud) to tell her how they worked. I don’t know what happened next, but I think she got sucked into her scroll. I guess that will protect her from the genjutsu.

We got to see the Sage of Six Path’s mother and she appeared evil as hell, looking down from the moon, controlling everybody. The ones who didn’t lose control because of the genjutsu were the Edo Tensei. Maybe they are immune because they are dead? What surprised me was Orochimaru falling under the genjutsu. I was expecting something better from him, a counter-measure of some sort. Killer Bee showed up too. With his sunglasses I’m not sure if he’s under the genjutsu or not. If he isn’t then he can be the one to tell TenTen how to use the Sage’s tools.

Madara activated the Jukai Koutan and tree roots erupted from the ground, 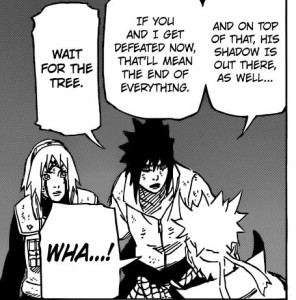 trapping everyone, connecting them to the God Tree, and sucking their life force while they all slept. Hinata’s last thoughts were about Naruto…Kishimoto and his love struck female ninjas. I’m not sure but it looked to me as if her thoughts reached Naruto, and Sasuke had to stop him from taking action. Turned out, Sasuke’s new Susanoo was protecting the major characters from the genjutsu. Then came the panel that must’ve punched Sakura fans in the gut. Sasuke told Naruto that if they both got defeated, it would be the end of everything. I could see Sakura thinking: What about me guys? I’m the lead female character! No one is going to notice me? Hello? Sigh! Why do I even bother?

The last panel showed Minato waking up and seeing the whole world connected to the God Tree. I think the characters left on the battlefield are: Naruto, Sasuke, Sakura (just because they need a female character), Kakashi (probably going to form a plan for the young ninjas), possibly Killer Bee, and the Edo Tensei Hokages. It’s good that Kishimoto got rid of a large group of characters and can now focus on the main group. I still don’t know how they are going to defeat Madara. I think the Sage’s tools that TenTen has is one possibility. As for Sakura, well, not being trapped under the genjutsu does seem to signal that Kishimoto at least didn’t forget about her.

What did you think of this week’s issue? Do you think the remaining characters will be able to fight Madara? Share your thoughts in the comments section!