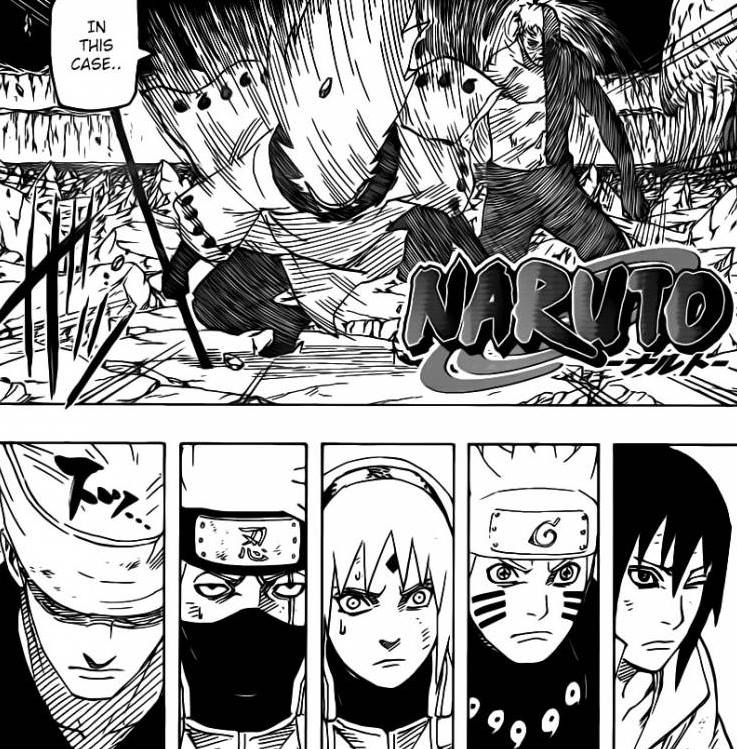 Madara was clearly one of the best things in this week’s Naruto manga issue. I know he’s the antagonist but he is one badass antagonist and it’s hard not to see how cool he is. Sakura also played a role this week, but I’ll get to that later. The issue presented the lead characters with another problem and I can’t wait to see how it all plays out next week.

Madara came back with Obito’s body and immediately said a cool line about whether Team 7 would consider dying together as teamwork. I was hoping for Obito to have his last words with Kakashi but I think he’s already dead. Then again, considering the kind of manga this is, he could just be unconscious. According to Madara, Obito hoped the young generation would win. I guess he really turned good in the end. I know there were some fans who thought Obito would end up beating Madara and taking his eyes, but I don’t think that ever going to happen now. Team 7 got ready to fight with Madara but his four shadow clones prevented them from doing much damage. Madara flew into the air for his Chibaku Tensi attack and it looked very impressive. There was a panel with Gaara telling Lee to run because of the destruction happening around them. Considering the type of character he is, I was hoping Gaara would be coming to Naruto’s aid rather than running away and actually telling Lee that the young hero would be okay. I think Kishimoto wants Team 7 do deal with the threat without any outside interference.

Before Madara’s attack, which are actually huge boulders coming down from the sky, a variation of Pain’s attack, could hit, Naruto made his own shadow clones to counter Madara’s shadows. His true body threw a huge Bijuudama Rasenshuriken at the boulders while Sasuke showed us his new winged Susanoo courtesy of his new eyes.  The chapter went by very fast. While Naruto and Sasuke were busy battling Madara’s shadows and countering his boulder attack, he flew closer to the moon and actually activated Infinite Tsukuyomi. Something Obito had been trying to do since the start of the war.

I don’t know if Naruto’s new powers gave him the ability to fight genjutsu, but the whole world seems to be in big trouble right now. The rest of the Shinobi Alliance hasn’t been seen for several issues now. I really wanted to see their reactions when Madara absorbed the God Tree and I hoped to see how they’re dealing with the activation of Infinite Tsukuyomi. What are they all doing? I think the jutsu will envelop everyone in the Alliance. The characters that might have a chance of breaking free or not being effected seem to be Naruto (obviously!), Sasuke (because of his eyes), and hopefully Sakura (because she’s a genjutsu type…fingers crossed). 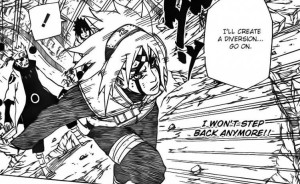 Speaking of Sakura, this issue will definitely get fans to react to her.  Some will like her, while some will continue hating her. The panel where she stepped back, when Madara appeared, had me close to cursing Kishimoto.  Then her seal was shown and I yelled out in joy. I knew her seal would be going full power but the fact she overcame her fear of Madara was a real treat. Just a few issues back she couldn’t even breathe because of how strong the antagonist was. This week, with him being more powerful than ever, she went head-on to fight him! I have to hand it to Sakura; the girl can take a beating. She took a lot of hits protecting Naruto, Sasuke, and Lee from the Sound ninja in Part I, and she took a beating from Sasori in order to finally defeat him in Part II. Here she ran towards Madara as a distraction in order to help Naruto and Sasuke.

Now comes the tricky part. Her plan was to rush towards Madara, get impaled, and land a powerful punch. However, her attack was blocked by one of his shadows which she couldn’t see nor sense. Did she do the right thing? As a smart ninja I think she should’ve formed a strategy with her teammates. But then again she made a decision based on the information she already had. I think her plan was to restrict Madara’s movements in order for Naruto and Sasuke to finish the job. Naruto had to step in to pull her away from the invisible shadow clone, while Sasuke tried to land an attack. Another thing shown in the panel was Sakura realizing that Sasuke didn’t show concern about her. Sakura needs to move on from him. I agree with Kakashi that she thinks it’s her responsibility to help him but I don’t think he’s worth it. He’s tried to kill her before and even now he wasn’t concerned about her. I personally liked Sakura being the first to initiate an attack even if it didn’t go as planned. As far as other fans are concerned, even if they complain about her getting in the way I think they would’ve complained if she actually did nothing. For me, it was better for her to do something and fail rather than not do anything at all. With her current power seal and the fact she wasn’t afraid to attack Madara, she seems to be the most power female ninja in the battlefield. With the ultimate genjutsu activated I hope Kishimoto doesn’t forget about her and we see her using her innate skills even if just to act as support for Naruto.

What did you think of this week’s issue? Do you think Team 7 will be able to counter the genjutsu? Do you think Sakura should stop having feelings for Sasuke? Please share in the comments.

Previous:DC vs Marvel: First Photo of Batfleck and Channing Tatum as Gambit
Next: Glee 5×20 Review: The Untitled Rachel Berry Project