This week, I was given the opportunity to do something that I don’t often get to do: be part of a live studio audience. You might ask, “But Jamie, don’t you live in New York? Don’t a bunch of shows film there?” Why, yes, they do, but let me tell you a not-so-secret secret – most of those shows aren’t live. None of the late-night talk shows like The Tonight Show with Jimmy Fallon or Late Night with Seth Meyers film live. They all film in the afternoon or early evening, and consarnit, people WORK, you know. (Also, getting tickets to those is actually quite difficult.) I have been to two tapings before – Anderson (Anderson Cooper’s talk show) and the American Comedy Awards – and neither or those were live. So, when I was offered two seats in the audience for Best Time Ever, I leapt at the chance. 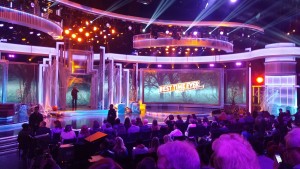 Best Time Ever, for those who may not be aware, is a live variety-type show on NBC hosted by Neil Patrick Harris and a celebrity guest. (There’s no real theme song, but thanks to Undie Girl, I am now obsessed with One Direction and so I just sing the title to the tune of “Best Song Ever”.) Every week features classics like the “Sing-a-Long Live” segment, where people watching at home are given the chance to win $1000 simply by knowing the words to whatever the chosen song is (with the help of the special musical guest!). There is also the “Get Lucky” segment, where an audience member is chosen at random to win fabulous prizes by testing their knowledge of recent news stories. Each episode closes with the “End of the Show Show”, a masterfully-choreographed performance featuring dancing and stunts. 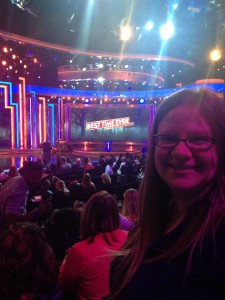 So, what is it like, being in a live studio audience? Well, first you have to get to the studio! After work on Tuesday, I hauled myself out to the Kaufman-Astoria Studios in Queens to check in and pick up my tickets and wristbands. I was on the house guest list, which is just a fabulous feeling. After a little bit of early drama (Would my plus one get there on time? Stayed tuned for more!), we were given our seat numbers and then ushered into queue chutes to be led into the studio – more of a warehouse than anything, and definitely the biggest show studio I’ve ever been in. Our seats were right on the aisle near the booth where the celebrity guest spends the show. You’re not allowed to have your phones out during the show, naturally, so we tried to do all of our picture-taking before they made us put our phones away.

There’s a level of excitement about being in an audience and knowing that it’s entirely possible that you’ll end up on television. People are either on their best behavior or acting more wild than usual, hoping that not only will the camera film them, but also the editors will pick their reaction shot for the broadcast. When I watched the episode on demand later (because I was an idiot who forgot to set the DVR), I spotted myself a few times in the crowd shots (I’m super thankful to my roommate for wearing such an easy-to-spot dress), and Allison – the girl who was picked for the “Get Lucky” segment – was seated right next to me. It doesn’t always happen, that you make it on camera when you’re in an audience, but finding out later that you were actually on television definitely adds to the experience – at least for me.

There are audience handlers who tell you what to do: when to clap (even how to clap), when to cheer, when to stand up. This is an especially important job for a live audience because of the serious time constraints. For a taped show, things like loud cheers and a lot of clapping can be edited out, but a live show doesn’t have that luxury. It has to end on time so that the next show can start on time. Tuesday’s show was the Halloween episode, so we were all given glowsticks with specific instructions as to when to crack them and how to wave them around (which, for the record, was during Ray Parker, Jr.’s rendition of “Ghostbusters” for the “Sing-a-Long Live” segment). There were a lot of times when I couldn’t hear what NPH or celebrity guest Kelly Ripa were saying because we had to be cheering; not to mention, there were a couple of times when NPH would be speaking to the television viewers, and so those of us in the studio weren’t meant to hear him, because it would ruin the surprise. 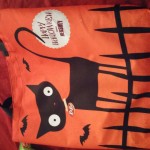 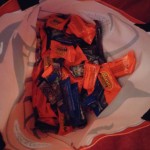 It’s hard not to have a great time at a show called Best Time Ever, and I’m incredibly thankful that I was given the chance to attend. Not only is it a lot of fun being in a live studio audience, but the show itself was great. The “End of the Show Show” was unbelievable, the segments were funny, Neil Patrick Harris is as charming and funny in person as he is on television, and we got warmed up for the show by some audience members with amazing talents – like break-dancing guy and opera-singing girl. Plus, everyone in the audience got a ginormous bag of Halloween candy, which saves me the trouble of having to pick some up myself! (Seriously. So. Much. Candy.) Sadly, I don’t get that many trick-or-treaters, so I guess I’ll just have to eat all that candy myself. Oh, darn.

If you haven’t yet discovered the awesomeness of Best Time Ever, you have one last chance! This coming Tuesday, November 3, is the season finale, and it promises to be a great one! So tune in to NBC at 8pm to have the best time ever!

I’ll leave you with the “End of the Show Show” from Tuesday’s episode, because it was amazing!

2 thoughts on “New York Geeky: Being in a Live Studio Audience Is the Best Time Ever”