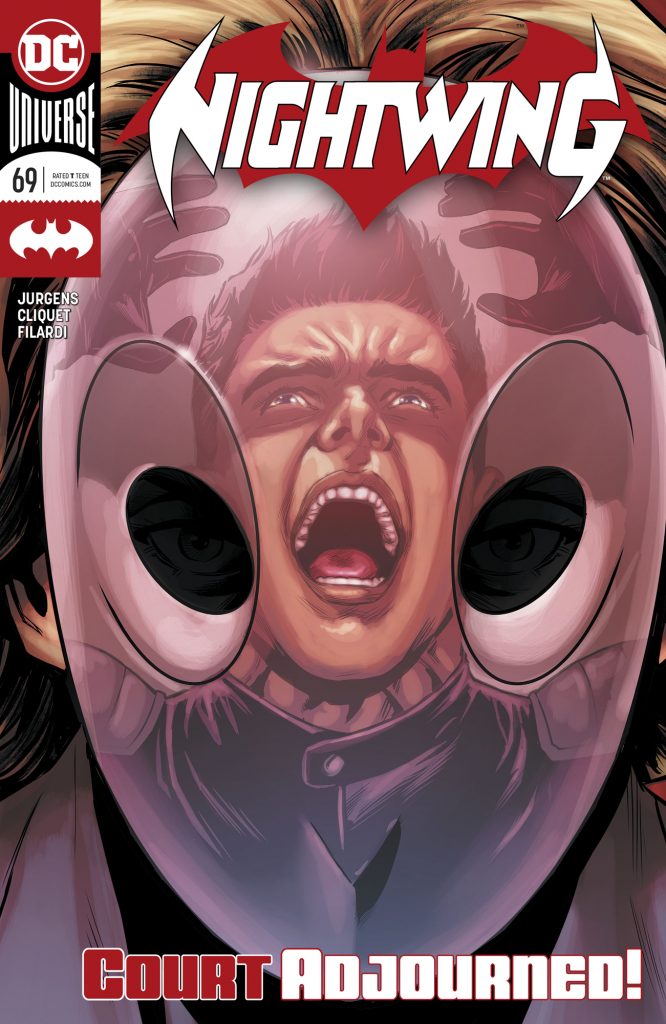 Last month’s issue of Nightwing gave me hope that we were finally starting to come to the end of the Ric Grayson storyline. Nightwing #69, “The Very Unfriendly Owl”, does not disappoint in that. Ric is now actively motivated to figure out which of his memories are real.

I originally wasn’t going to read Nightwing again until Dick Grayson was back. I just wasn’t happy with what DC had done with my favorite comic book character. Dick was shot in the head by KGBeast, lost his memories, and started going by Ric Grayson for some reason. This particularly storyline has been going on for quite a long time now.

I came back to the comic because I had seen art pages from issue #68 that showed Ric getting some of his real memories back and a desire to figure out what was real.

Nightwing #69 starts out with a television broadcast about the multiple Nightwings currently looking after Bludhaven in Dick’s absence. A viewer who is not shown asks, “Is this some kind of joke?” (Hint, hint of things to come!) After that, we get into the main part of the story where Grayson is in Switzerland trying to locate Doctor Haas, who saved his life after he had been shot in the head.

A lot of the narration is Ric talking about how he has two distinctive sets of memories for different events in his life and how he doesn’t know which ones are the real memories and which are the false ones planted into his mind by the Court of Owls. We then go to a brief flashback of the previous 24 hours, where Ric and his girlfriend Bea discover that his doctor was gone, only leaving an owl mask from the Court of Owls behind.

When Ric finally locates the doctor, she is dressed like a member of the Court of Owls. He questions her and she brings out some sort of strange crystal called the “Identity Crystal”, claiming that it was the main tool in making Dick basically a clean slate to rewrite his history as the Court so desired.

For the most part, I really enjoyed this issue of Nightwing. I feel like Dan Jurgens’s writing is solid, and he’s slowly tying up all of the lose ends while winding down on the Ric Grayson storyline. Ronan Cliquet’s art style fits the tone of the comic well with Nick Filardi’s bold and striking colors. Then there’s Travis Moore’s cover, which paints a vivid picture of the mental turmoil that Ric is currently going through. He always draws the best Dick Grayson!

There was plenty of action in this issue, and we got to see a lot of Dick’s typical fighting style. He now knows what he wants and he’s motivated to get it. Ric’s number one goal is to figure out who he is, not who those who are trying to control him are telling him who he is and who he should be.

The only thing that really threw me was the “Identity Crystal.” This is something that was not brought up at all before and felt a little like it was thrown in there as some kind of plot device, but time may tell. The end of the issue definitely has me on edge for what will happen to Ric Grayson next!

If you have been hesitant to start reading Nightwing or to get back into reading Nightwing like I was, I would highly encourage you to pick up the title. The end of the Ric Grayson storyline is finally in sight and considering the last two issues, the journey to bringing Dick Grayson back is proving to be an enjoyable one. I certainly will continue to read the comic if the next issues continue in the same vein as this one!