OMG! Check Please Kickstarter Explodes Right Out of the Gate 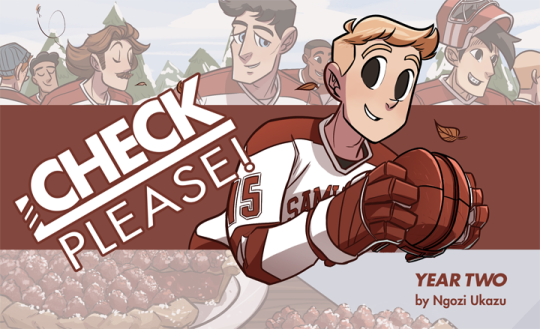 Check, Please! creator Ngozi Ukazu has launched the comic’s second Kickstarter, to make physical copies of the comics comprising Bitty’s sophomore year at Samwell. In less than an hour, the Check, Please! Kickstarter has made more than double its goal.

A couple of months ago I wrote a recommendation for Check, Please!, the web comic about a gay, Southern, hockey-playing baker that had recently become my latest obsession. While I didn’t do so in my previous post, I lamented the fact that I got into the comic so late and missed the Kickstarter to make physical copies of Year One. So I’m very happy and grateful that Ngozi has added a copy of Year One to many of the backer levels for the Year Two Kickstarter.

The Kickstarter, which currently has over 1000 backers (I am watching the numbers climb as I type this), offers a bunch of different rewards per backer level. $10 gets you a digital copy of Year Two, and $20 gets you digital copies of both Years One and Two. $250 gets you digital and hardcover copies of both years, as well as some extras, including Bitty’s Samwell jersey. The lucky backer who had $500 to spare gets virtually everything in existence and will be drawn as a Wellie (Samwell student) in a future comic.

I went for the $75 level, which includes softcover and digital copies of both years (since I missed the Year One Kickstarter), signed bookplates, and the Kickstarter print set.

Ngozi has already sent out her first project update! In addition to thanking fans for the amazing (and swift) response to the Kickstarter, she outlines the project’s stretch goals.

As of my writing this, backers have pledged over $97,000, but you’d better hurry up! Some of the levels have already run out, and you don’t want to miss out!

If you haven’t checked out Check, Please! yet, you still have time! Another nugget of information included in the first project update – a new update is coming later today!