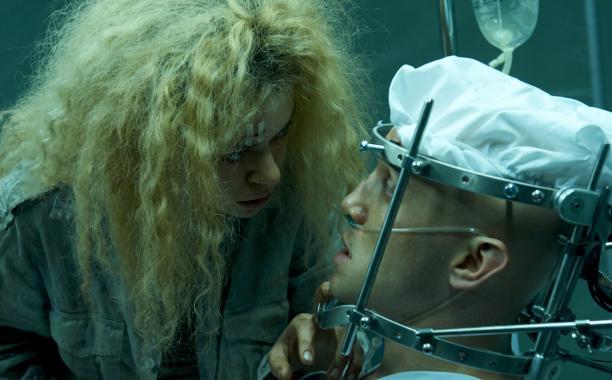 Projects Leda and Castor were even more intertwined than we initially thought, and with last week’s bombshell that all the clones are biologically brother and sister, the importance of them acting as family has never been more relevant. In fact this week, if it weren’t for the budding sibling relationship between Sarah and Mark, they certainly would have both died.

The main storyline in “Newer Elements of Our Defense” revolved around Sarah and Mark. First of all, Mark isn’t dead! He is seriously wounded from being shot by Gracie’s mother, and Sarah helps him escape from her clutches and saves his life. He is reluctant to receive the help, but she tells him that she is all he’s got. I really like Mark and Sarah together. I think that of all the combinations of clones we have, these two are really the most alike. While laying low together as Mark recovers from his gunshot wound, he opens up to her a bit about his upbringing with his Castor brothers. He even explains the reason that he went rogue: to try to find the original tissue samples himself to trade for the Castor brothers’ freedom. Mark has become quite complex and a bit sympathetic. I hope we get to see more Mark and Sarah together in the future.

While searching for clues in

Mark’s hotel room, she finds Henrik’s documents that Gracie uncovered from last week’s episode. It turns out that Henrik was Duncan’s lab assistant during Project Leda, and stole some of the original Castor samples to create his own clone. After communicating with Mark about her discovery, they try to locate the grave of Henrik’s failed clone experiment. This could be the answer to the Castor mission: actual tissue samples. Just as they recover the body, Rudy comes upon them. Sarah bangs him in the head with a shovel. The Castor clones don’t need any more potential brain damage, Sarah! It looks as though Mark and Rudy are going to take Sarah back to Mother, and she may be reunited with Helena so it will be interesting to see how that turns out!

Speaking of Helena, she may be a prisoner at the military camp, but they are feeding her well! She concocts a plan to get to the infirmary and start an escape with the help of scorpion friend Pupok. Instead, she comes across a very ill Castor clone whose brain is exposed. It is unclear if they are torturing him, trying to cure him, or experimenting on him. He begs her to put him out of his misery, so Helena kills him. Unfortunately for her, Mother discovers her just as this is happening, so this probably will not work out well for her.

Gracie is having a rough time after her mom takes her away from Mark. They go back to the compound together, and she miscarries. Her mom is a piece of work! Since Gracie has no use to the Proletheans anymore, she is cast out. I feel a bit sad for Gracie. It is clear that she is still trying to find her way in the world, and no one really wants her. The only people that really care about her are Mark and Sarah, and they are estranged at the moment.

Allison and Donnie continue to have chaos in their lives by juggling a campaign, swim lessons, and pill

delivery. I still love them. Unfortunately, the drug supplier that sold Ramon the pills is still owed money, so he pays an unwelcome visit to the Hendrix family. The supplier ends up being a blast from the past for Allison: her high school boyfriend, Jason (played by Justin Chatwin). And they flirt with each other mercilessly. I don’t know how she does it, but Tatiana Maslany has insane chemistry with every single actor on the show (and even herself playing other characters), so I am interested to see what sort of relationship will come between Allison and Jason.

Unfortunately, this week’s episode was a bit convoluted, in my opinion. There are just too many story lines to keep track of, and we are starting to get minimal time with the characters that we do care about. Cosima and Felix did show up, but only for a couple of very short scenes. Mrs. S, Art, and Paul were nowhere to be found. I hope that the Prolethean story line will be done now that Gracie has been banished. I like Gracie, but let’s move on from the creepy compound people. In fact, let’s just keep the story going in a forward motion. I am, however, glad that we get to see top-notch acting all around from everyone on this show, and that is what keeps me coming back.

Previous:“Undertow” by Michael Buckley: The Little Mermaid This Is Not
Next: Now That Season 2 Is Officially Happening, It’s Time To #DiversifyAgentCarter