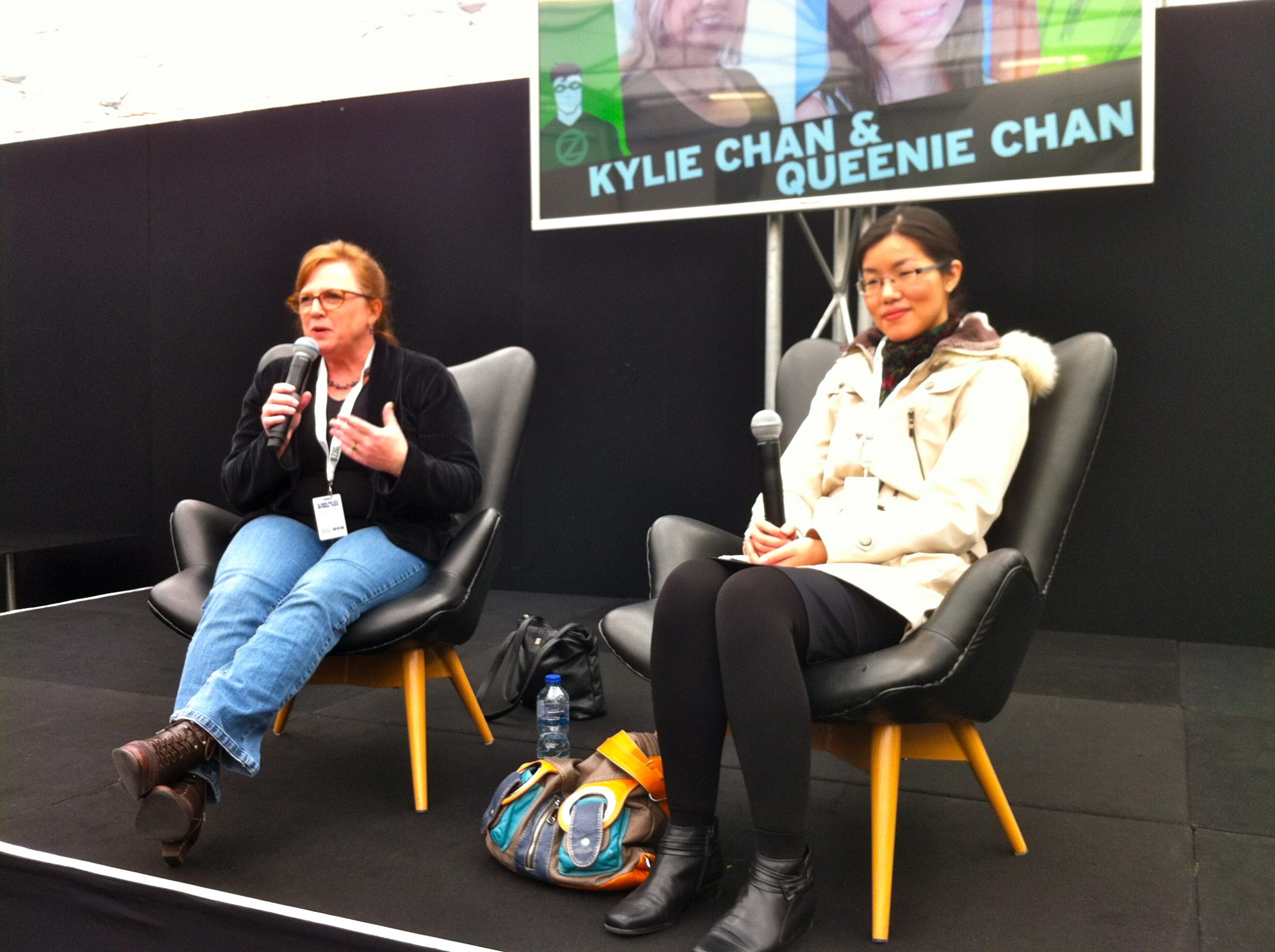 One of my favourite things to do at cons is break away from the main crowd and find myself in one of the smaller halls or seminar rooms, where there are all kinds of wonderful things to enjoy. My Oz Comic-Con schedule was pretty full, so I didn’t get to see much of the smaller stuff, but I made it my mission to get over to Stage 3 to see fantasy author Kylie Chan and comic/manga artist Queenie Chan. It was definitely worth the effort to listen to these two fantastic women talk about collaboration, the creative process, industry horror stories, fan fiction, and female representation. 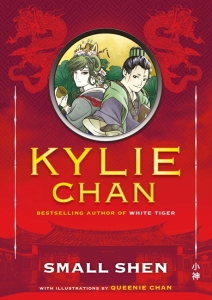 While I had seen Kylie Chan’s books on the shelves, I hadn’t actually read them until I had the pleasure of seeing her at Sydney Supanova earlier this year. After which I picked up a copy of White Tiger, and I have already finished the Dark Heavens Trilogy. Queenie Chan collaborated with Kylie on Small Shen, which I have yet to read (though I have picked up a copy), a prequel of sorts to the Dark Heavens series. Queenie is probably best known for her 3 Volume mystery-horror manga “The Dreaming”, which is to quote Queenie, “probably the only example of Australian Manga in existence that is heavily about Australian culture”. I can’t wait to read it, and I’ll definitely pass it on to my more manga knowledgeable co-workers.

They talked about so much over the 45 minutes the audience spent with them that I’m not sure where to start. Like the fact that Kylie had to publish her novels as a group trilogies, when really they are one long series, because “all fantasy books must be trilogies. It’s the way we do things.” Although George RR Martin, and Game of Thrones have changed that somewhat. Queenie also had problems with trilogies, because people often judge the first volume of The Dreaming as a complete story, when in reality it’s just the first part of a cohesive whole and should be read together with volume 2 and 3.

They talked about their differing creative problems. Kylie thinks that starting is that hardest part, and once she gets about a third in that’s when it really starts to flow. Queenie, on the other hand, has no trouble starting, but the middle tends to drag on. When she’s working with another author it’s the character designs that are the hardest, although working with Kylie was surprisingly easy.

When the topic turned to the publishing industry things got interesting. Kylie thinks that “regions are stupid” especially in regards to digital publishing. “And they complain about piracy,” said Kylie. “I have no problem with people downloading my books provided they buy them if they really like them. It doesn’t effect sales. But locking people out when they know the book exists is stupid.”

Queenie talked about making the mistake of selling all the rights for The Dreaming to the publishing house. “But I think as a girl in Australia,” adds Queenie, “you want to be a Manga artist, you don’t have options and if somebody extends a hand to you across the pacific… it’s likes angels have descended from heaven… I don’t have any of the rights to The Dreaming and it did fairly well for a book that was never promoted.”

In regards to the digital vs. hardcopy, they see the importance of both. In fact, Kylie’s current research at the University of Queensland is about digital publishing. “We get more money for digital books” said Kylie. “Buy digital, we get more money. We love it.” Queenie added: “Buy both really.” Which Kylie also thinks is a good idea for the books you love because with the hard copy you’re getting it for perpetuity whereas the digital copy is only good as long as he technology is comparable and the companies continue.

Kylie went on to talk about her current research, which focuses on the creative freedoms that digital self-publishing gives us. “There are really wild and strange things that are being published digitally that traditional publishers wouldn’t ever touch.” She seemed particularly fascinated by the world of digital erotica. As a long time fangirl and fan fiction consumer (even occasional writer), the strange and wonderful things finding a home in the world of digital erotica are hardly shocking, but it was fun to see how fascinated and excited Kylie was about the whole concept.

Queenie was quick to mention that it’s not just erotica, there is a whole new world out there. Suggesting that because of the tight margins in professional publishing they are less likely to take risks, so if you’re a new voice or you’re too original it’s not worth the effort. But that doesn’t mean there’s not a market out there. “I always tell people comic book artists that put all their work online for free should always put their work up as an ebook and as a print book because people will buy it if they like your work, and there’s no reason why they wouldn’t buy a hard copy or a ebook.” 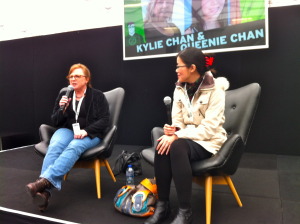 They both think that self publishing is a valid route, because it’s no longer got the stigma of vanity publishing. These days, it’s people that can’t get a traditional publishing contract – for all the reasons mentioned earlier – who will self publish. Kylie said: “Traditional publishing put me in bookstores… that’s rather like saying they will make extra effort to sell your book to dinosaurs.” She did add that with traditional publishers you’re buying the brand name. They are acting as gatekeepers. When people see a known publishers symbol on the spine of a book it’s like a seal of approval, a guarantee that this book has going through a certain vetting process.

The biggest tip from both Kylie and Queenie was to build an audience/fanbase, whether or not you go with a traditional publisher or decide to self publish. “Put your work online, get a fan base and then get published,” said Queenie. Get a bunch of Twitter and Facebook followers because that’s what publishers look for, even though, as Queenie mentioned, it’s pretty easy to buy yourself a social media following.

While we’re on the topic of an online presence, Queenie and Kylie both had nice things to say about fan fiction, although they don’t read it themselves. Queenie did read some fan fiction for The Dreaming because she was the judge for a fan fiction contest her publisher ran. She said she was impressed with a number of the stories she read. She added, “it would be interesting to read the unfiltered edition of some of these fan fiction and see what the fans would have done.”  But generally she doesn’t read fan fiction.

Kylie had a different approach, she was very supportive of fan fiction – although she did talk about it as a learning tool on the way to original fiction rather than a hobby in it’s own right – but she doesn’t read it for legal reasons. “If I read fan fiction, whether or not I’ve read a particular storyline, if I use that storyline in my books I could be sued by the fan for stealing their storyline, so I don’t.”

The most interesting part of the discussion, for me anyway, came close to the end. I could have listened to these women talk about female representation forever. Kylie had a test for the audience to demonstrate how easy it is to fall into stereotypes, particularly the idea of male as default:

Queenie added a personal tale about how people perceive the characters in The Dreaming, which has an all female cast except for ONE male character. He’s a second tear character but he’s still there, so she’s often confused when people say there are no male characters in the story she’s like: “no there’s Trevor who’s actually important to the plot because at end of act one he gives a book to the main character, Jamie, so she can do research on the school. So yes he is an important character but people just think he does not exist.” People are so used to all male casts with just one female character, and it’s so rare to see the ratio flipped that they don’t notice the one male character. That’s a pretty good depiction of why one female character is not acceptable representation.

Kylie had one final piece of wisdom to impart: “It’s very easy to put more women into stories: feminize their name and make them exactly the same character.” Then it was over all too soon, but it certainly gave me a lot to think about.