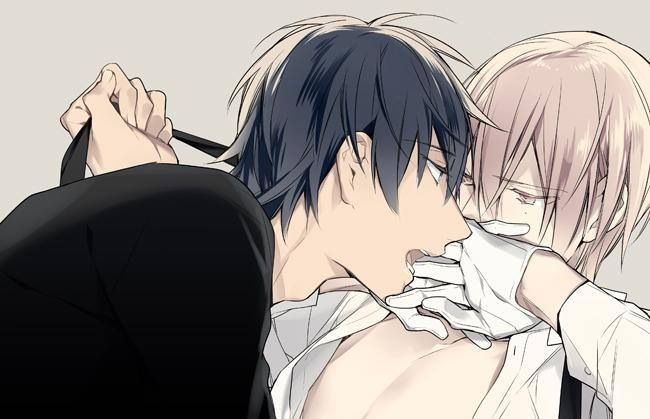 Good news yaoi fans! One of the most popular current titles, Ten Count, is now available in English!

SuBLime, which bills itself as “the leading global English-language yaoi manga publisher,” is offering the print version of Ten Count for $12.99 U.S. / $14.99 CAN and the digital version for $5.99 U.S via their website.  You may remember this series from the sixth part of my Yaoi Recommendation series devoted to mature manga and light novels.  It is truly one of the best active yaoi titles out there and, with Love Stage set to end soon, probably the most satisfying currently active series in publication.  (Okay, second most satisfying. I’m all about Honto Yajuu… when it’s published every few months).

The series focus on OCD sufferer Shirotani as he slowly explores his feelings towards his unconventional counselor Kurose.  I found the series delightfully dramatic without being overtly dark.  It definitely earns its “M” rating, but the detailed characterization gives even the most shamelessly graphic scene a massive punch in the feels.  And hey, if you are looking for some good Hurt/Comfort, this is pretty much the most Hurty/Comforty title I’ve ever read.

Popular titles getting licensed in the United States is often both a blessing and a curse.  On the one hand, it feels good to be able to support our mangaka and also brings it to a wider audience.  On the other hand, publication schedules aren’t always at the pace we desire and online scanlators that have a quick turn around tend to pull their material the moment it gets licensed.  Ten Count is new, though.  It won’t take long to catch up, so I’m hoping this won’t be too much of a problem.  Besides, SuBLime is specifically dedicated to this one genre and I have faith in them to deliver.

Previous:Steven Universe 4×02: Know Your Fusion
Next: New LGBT Character, LGBT Superhero Show, and More from DC and the CW