I usually try to theme my recommendations in groups of three, but I had a hard time with this one.  There are two light novels I absolutely adore and one manga I’m completely over the moon for, but I couldn’t find a third light novel or two other manga to pair them up with.  At this point I’m so overdue to recommend all three that I’m throwing in the towel and generically labeling them as “mature.”  Am I cheating here?  Maybe a little.  But I assure you, all three of these choices are very, very good. 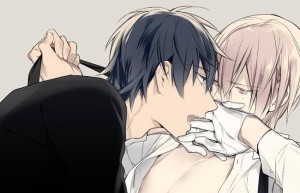 Ten Count has been one of the most emotionally moving but simultaneously draining manga I’ve read this past year. Shirotani has mysophobia, which is basically a version of OCD where he is horribly afraid of germs and washes his hands raw in an attempt to rid himself of anything unclean.  He then meets Kurose, who works with patients with similar conditions and offers to help him cope with his condition.  Together they make a list of ten things he needs to conquer as a part of an exposure therapy regimen.

Mysophobia isn’t an ailment I know much about, so it’s hard to say how accurate this portrayal is.  At the same time, I feel like it’s very respectful of mental illness while also acknowledging Kurose’s difficulties being in love with someone who he can’t be completely intimate with (yet).  The two have a difficult relationship, but the love between them is there and it’s quite powerful.  I’ve been moved to tearing up quite a few times.

It does skirt close to dubious consent, but most of the context of Shirotani saying “no” is from his mysophobia, not sex itself.  The response from Kurose is usually from a therapy perspective, instead of someone who is pushing the boundaries with their partner, so I feel it’s safe for those who may be triggered by non-consensual sex scenes.  Then again, if you are sensitive to things that even skirt close to it, this could still be a tad close for comfort. 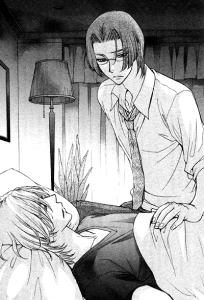 Remember when I was reviewing Love Stage!! how I was obsessed with Rei and Shougo?  Well guess what?  They have an entire light novel series devoted entirely to them.  It is a tad hard to find as it takes a good deal of time for scanlators to translate entire novels, but what’s been translated so far is pretty amazing and, if you can’t read Japanese but still have patience waiting for scanlators to release tiny snippets every few weeks, you should totally seek it out and read it.  There’s also a Back Stage manga being released, but the chapters are extremely slow to update, so this recommendation is exclusively for the light novel for now.  When the manga gets more complete I may recommend that piece separately.

The novels cover several different time periods in Rei’s life, from the moment he got swept up in the Sena family’s orbit to after Izumi’s debut in the entertainment industry.  His relationship with Shougo isn’t as straight forward as many other romances go, but it’s still remarkably beautiful.  Their sexual relationship starts when they are both teenagers, but Rei is very clear from the beginning that he’s in love with Shougo’s father, who basically saved him from the streets and changed his life forever.  Shougo acknowledges this, but is head over heels in love with Rei anyway.  It’s complex, beautiful, and very emotional.

But this story isn’t just about the relationship between Rei and Shougo, but about Rei’s place within the Sena family as a whole.  He’s close to the entire family in various ways and his complex backstory makes his position with them even more meaningful than what we’ve been given in Love Stage!!  Rei is a remarkable character with a believably tragic past and I’m proud to place him near the top of my list of favorite characters of all time.  The line for the Rei fanclub starts behind me, so take your spots and let’s celebrate this beautifully complex character together. 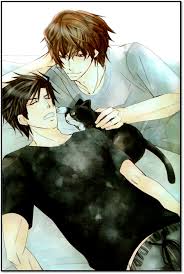 Remember that OVA I reviewed last year?  This is the light novel series it’s based on.  Yokozawa Takafumi no Baai is tied into the same universe that the characters of Junjou Romantica and Sekai Ichi Hatsukoi live in.  It’s more tied directly to the latter, as Yokozawa is one of Takano’s closest friends and the two shared a sexual relationship in the past.  It’s pretty clear Yokozawa loves Takano, but as the story in SekaKoi moves forward, it’s clear that Takano loves Onedera.  And here we launch off into Yokozawa’s own story which, in my opinion, is the best thing this universe has going for it.

Yokozawa isn’t the only connection with the JR/SekaKoi universe.  His new lover, Kirishima, appears in both shows.  Most recently he popped up in the latest season of Junjou Romantica as Misaki grows closer Ijuuin-Sensei.  Kirishima is Ijuuin’s editor for Za Kan, which is the most popular shonen manga at Murakawa Publishing.  All these tie in’s are exciting, but while watching the newest season of JR I couldn’t help but wish we’d have gotten more of Kirishima and Yokozawa’s story instead.  But alas, I have to settle for waiting on the light novels to be translated bit by bit for heathens like me who can’t understand Japanese.

Yokozawa’s story is my favorite simply for the fact that it feels a lot more mature and consensual than any of the other relationships in this universe.  Add on the fact that Kirishima has a young daughter and we get a very different feel to it all.  Instead of focusing on misunderstandings between these two love birds, we get two reasonable adults who are just trying to navigate their feelings for each other and make their way in the world.  If you enjoy the JR/SekaKoi world and haven’t tried to read the light novels, you are severely missing out.