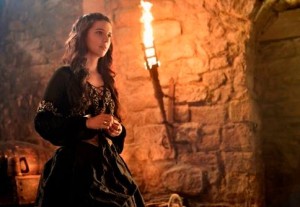 This week’s Reign showed us that you can never judge a group based on the actions of a few fanatics.  At the castle, I was happy to see the ladies in waiting being used to keep tabs on Catherine.  Lola and Catherine’s scene at the end of the episode was one of my favorite moments.  We learned a bit more about Bash, and he’s starting to feel like a real person to me.  So let’s jump into my thoughts on “Sacrifice”. 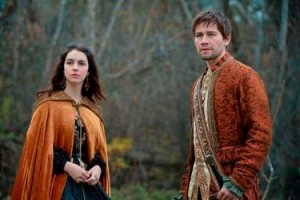 So King Henry is off to Rome, leaving Bash as acting regent in his stead.  I couldn’t help but think that perhaps Bash should have had some counsel guiding him.  Yes, Mary was there to offer advice, but I felt like the scene needed a person or people who are familiar with the everyday workings of the French kingdom to advice Bash.  The situation with his cousin seemed like an obvious ploy by the writers to get Mary and Bash alone, but it did offer some interesting moments between them.  I really liked Isobel and was disappointed that she was killed off as, through her, we learned a little more about Bash and the kind of person that he is.  I must say, in this episode, I warmed up to him as a character as he was given a chance to really shine.  In the Blood Wood, when Mary was panicking and attacking him as though he were a pagan, he didn’t lash out at her.  Instead he explained the pagans and their beliefs to Mary in a way that she would understand.  I really admire Bash’s adaptability and capacity for understanding.  This is quite the extraordinary situation that he has been thrust into, but he doesn’t blame Mary.  On the contrary, they work really well together, finding solutions their problems as a team rather than the gallant hero and his admiring heroine.  I feel like Bash respects Mary and looks at her as his equal.  Francis had the nasty habit of throwing it up in Mary’s face that she was just a woman or his fiancée when she disagreed with him.  Mary and Bash seem to be more of an equal partnership, and I’m getting excited to see more of this relationship develop.  Their scene at the end of the episode was very touching.  I loved that Mary was willing to pay respect to Isobel in a way that was foreign to her, and you could tell how much that meant to Bash.

Catherine is in quite the desperate situation, which might 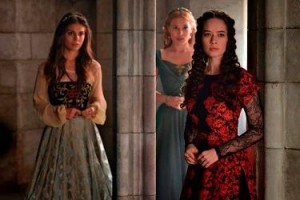 explain her actions.  I can’t help but feel that the Catherine we were introduced to at the beginning of the show wouldn’t have attempted such an obvious plan and not expect people to suspect her.  She seemed so unlike herself in this episode.  She’s always played things so close to the chest, like the plan with the coins and the Italian count, that for her to be yammering to Mary’s ladies almost seemed like she wanted to be caught, which again isn’t like her at all.  I’m glad Kenna was given a moment to shine and have a redemption of sorts.  Her storyline with Henry had intrigued me at first, but the change that it brought to her and how selfish she became really put me off her character.  Even in the last episode, her first reaction was about herself when Mary told her ladies about the plan to legitimize Bash and marry him instead.  So to have her helping Mary and Bash in such an instrumental way was a step in the right direction towards getting me to like this character again.  But the lady who really shined in this episode was Lola.  In the first half of the season, I was disappointed to see her fade into the background after the storyline with Colin faded, so having her go head to head with the woman responsible for Colin’s death was really something to watch.  Like I’ve said before, I’m a big fan of Anne Popplewell, so it’s such a pleasure to see her shine in scenes like this.  In the scene between Lola and Catherine, you could see strength in Lola that practically screamed, “Don’t mess with me or my Queen.”  I hope we get more scenes like this between Lola and Catherine, or just more scenes in general with Lola being a total badass.  I know I can’t be the only person who would enjoy that!

Next week’s episode looks to be pretty interesting.  I hope we will see Francis again because, regardless of the things that she’s done, Catherine is still his mother and I can’t think that he would be okay with his father beheading her.  Speaking of Catherine, she has to get some outside assistance against Henry.  Perhaps she will find some dirt on Bash?  The obvious fact is that they can’t kill her.  She’s too vital to the story as the main antagonist.  So I’m interested to see how she will get herself out of this situation.

All in all, I really enjoyed this episode in terms of character development for Bash.  In the first half, I had difficulty connecting with the character, but now with Francis out of the picture, Bash looks to really shine.  I’m hoping in the next couple episode that the pace will slow down, but I’m still happy with the episodes we’ve seen thus far.

What are your thoughts on last night’s episode?  Comment below and thank you for reading!

Previous:Black Sails 1×1 Review: I.
Next: Helix 1×5 Review: The White Room