Reign 1×09 Review: For King and Country 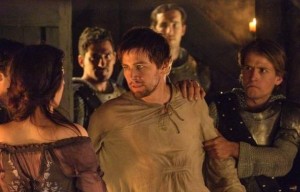 All hail Queen Mary!  Last night’s episode was very extremely well done, and everyone involved brought their A-game.  It was full of explosive plot twists and high octane emotions, keeping me on the edge of my seat until the very end.  So without further ado, here are my thoughts on “For King and Country”.

First off, let’s give it up to Adelaide Kane and Megan Follows!  These two were just phenomenal in every 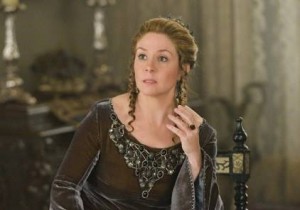 scene they were in, whether it was together or separate.  At the beginning of the season, Mary was timid and not used to the games that were play at court.  But last night showed a very different side of her, one that I hope we continue to see as the season progresses.  She is starting to come into her own as a ruler, as evidenced by her calling King Henry’s bluff about executing Bash and standing her ground against Francis’ reasoning.  In the face of Henry’s threats, she kept her cool and came up with her third option, showing her growing maturity and intelligence as a queen.  I’m interested to see when her mother, being played by Amy Brenneman, is going to show up and what the reason behind that visit will be.  I have a feeling that Mommy Dearest will not be too pleased at the thought of her daughter marrying the “former” bastard of the French king.  I have to admit I was a bit disappointed that Mary and Bash running away wasn’t dragged out to another episode or two.  But now, with Henry seeking to legitimize him, I will get that development of their relationship that I talked about wanting to see in my previous meta. But I hope that they also expand on Bash’s character apart from Mary as well.  He’s sort of been a background character up until this point, so it will be interesting to see the writers flesh him now that he has been thrust into this extraordinary situation.

To quote one of my favorite characters on Game of Thrones, “You love your children: it’s your one admirable quality.”  Let it never be said that Catherine does not love her son.  She reminded me of Game of Thrones’ Cersei Lannister in her relentless pursuit to keep Francis safe and the true heir to the French throne.  She loves him, and it’s intriguing to see her and Francis drifting apart as a result of her scheming against Mary.  I can’t wait to see where they take her character and whether the rift between her and Francis can be repaired.  The scenes between her and Henry were very entertaining, the two of them constantly trading barbs and battling wits.  Although she may loath to admit it, she and Henry do have a lot in common.  They are both absolutely unstoppable in pursuit of their goals: Henry for power and Catherine for the well-being of her son.  In regards to his trip to Rome, it doesn’t appear that Henry will be out of the picture for long, as the summary for episode eleven “Inquisition” has Henry taking a page out of another Henry’s book and accusing Catherine of treason and adultery.  But I believe Catherine will find a way around that.  She’s proven time and time again that just because she is beaten does not mean she is defeated. 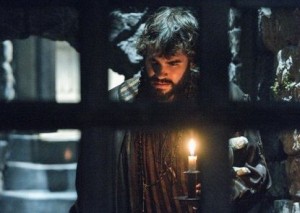 The scenes between Mary and Francis were heart breaking.  Toby Regbo really showed Francis’ desperation as the episode progressed, the scene where he attacked Bash in his cell seeming so raw and angry.  It’s sad to me that in order to keep him safe, Mary and Bash must break him, seemingly taking away his very identity as the Dauphin of France.  At the end of the episode, he just seemed to be numb in his acceptance.  We have quite the role reversal now with Bash becoming the true heir and Francis the bastard.  I’m excited to see whether they take his character in terms of his newfound freedom.  I hope he does more than just sleep around with women.  I don’t believe he will give up on marrying Mary, and it makes me wonder what lengths he is willing to go to achieve that goal.  Perhaps he will start doing some scheming of his own?

My opinion of Nostradamus changed quite drastically during the course of the episode.  He was downright cruel towards Clarissa, and I couldn’t help but cheer when she stabbed him at the end of the episode.  Calling her a monster was a bit like the pot calling the kettle black and him being attacked by her was no less than he deserved.  We will learn the truth of who Clarissa is and her ties to Nostradamus in “Inquisition”, the revelation is said to be quite shocking.  With the way he talked and acted around her, I can’t help but think she is someone’s daughter, perhaps even his own.  But the “shocking” aspect tells me she’s connected to someone important.  Perhaps Catherine?  Maybe that will be why Henry accuses her of adultery, thinking Clarissa is the product of an affair between her and Nostradamus.

So, those are my thoughts on “For King and Country”.  It was an entertaining episode and created a fantastic set up for the second half of this season.

If you’re interested in the music of last night’s episode, the songs were “Fuel to Fire” by Agnes Obel and “Daughter” by Amsterdam.  You can follow ReignMusic on YouTube for all the songs played thus far!  What were some of your favorite moments?  Comment below and thank you for reading!