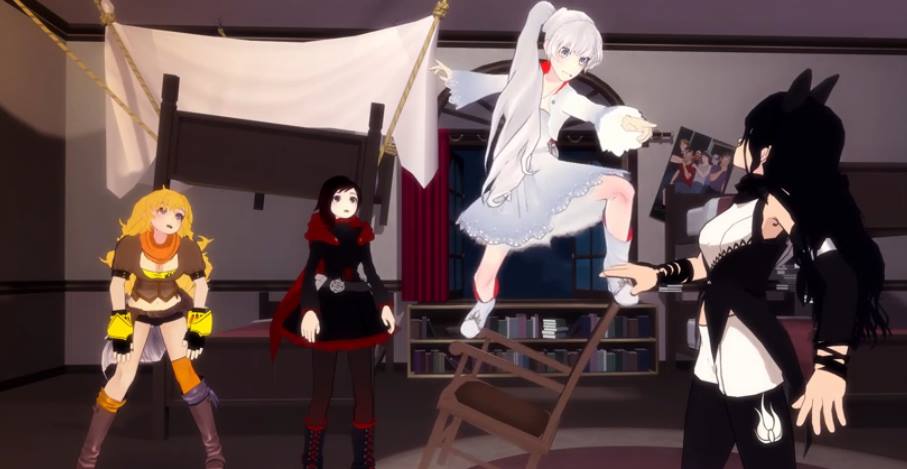 Now that we’re past the introductions, it’s time to get into the overarching story. Last volume ended with the reveal that Blake was not only a Faunus, an often discriminated against subspecies of humans which bare various animal traits, but a former member of The White Fang, an activist turned terrorist organization. The White Fang appear to be working along side Cinder Falls, to an ends we are not yet aware of. Team RWBY ended the volume by thwarting one of their larger robberies, with Blake teaming up with a visiting Faunus named Sun, and Ruby teaming with a… well, it’s unknown what she is really, named Penny; android seems to be the fan favourite prediction. We also learned that Beacon would be hosting a tournament and that members of other schools would be showing up in town. Everything up till this point has been mainly character development, with little information about the outside world.

If I were to pick the theme for this weeks episode of RWBY, I would have to say it’s world building. In almost every scene, the characters dialogue is built around giving as much exposition as possible. The episode starts with Professor Ozpin speaking with the headmaster of one of the visiting schools who we learn is also the commanding general to an army of another kingdom. It appears there is tension in the kingdoms and they give hints that a war may be brewing; against what or whom is left unsaid. As a Harry Potter fan, it’s hard to miss the comparison to Goblet of Fire’s Triwizard Tournament, as it appears many other top academies are arriving at Beacon and will be staying as exchange students for an extended period of time. It will be interesting to see if we’ll get more classroom episodes and whether the exchange students will be integrated in with Beacon or kept separate. Professor Ozpin and Glynda Goodwitch are easily reminiscent of Professor Dumbledore and Professor McGonagall, with Ozpin being casual but wise and Glinda much more strict and disapproving. Last volume, when people made the Harry Potter comparison, I brushed it off feeling the series more strongly echoed Soul Eater in tone, but now I’m started to rethink that assertion. 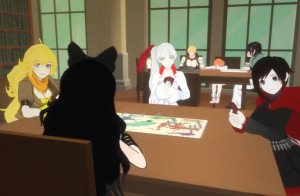 The next scene sees team RWBY playing a board/card game, which appears to be a mix of Risk and Magic: The Gathering. The places and creatures however, are based 0n their own world, and so with each of their moves, we learn about a few more factions, kingdoms, and their abilities. It wasn’t till my third viewing that I caught Yang mentioning most of Ruby’s army “were probably androids”, leading credence to the aforementioned Penny is a robot theory. It makes me wonder what other little things I may have missed. Blake is annoyed at the girl’s apparent flippant attitudes after recent events, and leaves to brood on her own. A flashback occurs and we learn Professor Ozpin had had a private meeting with her where it’s hinted that he knows or at least suspects her former involvement with The White Fang. And again, I must harken back to the Harry Potter comparison. Professor Ozpin pulls the “are you sure there is nothing else you would like to tell me,” line complete with dramatic pause and her reply, “I’m sure.” It’s almost identical to the scene between Dumbledore and Harry Potter in Harry Potter and The Chamber of Secrets, where a similar exchange occurs and it’s so obvious the respective headmasters know what’s up, and just want their students to ask for help. I don’t consider this a bad thing at all. It really is just adding to my curiosity about Professor Ozpin’s character.

The episode ends with Weiss calling Blake out on distancing herself from the group and they discuss the fact that something major is going on in their world and whether they should involve themselves or leave it to the adults. Predictably, getting involved wins the argument. Ruby runs from the room because she realizes she forgot the board game in the library, and crashes into three exchange students, Cinder Falls, Emerald, and Mercury, the three villains from episode one. Ruby doesn’t recognize them, and instead directs them to the proper dormitory. Cue credits.

Over all, I loved this episode. I’m a big fan of world building and this episode gave me much to ponder over.  So much so that I’ve watched it several times now. Despite there being no action, the music was fantastic. The scene of them playing Risk: The Gathering, was hilarious. There were so many great lines being exchanged between characters that I could honestly watch an entire episode of them just sitting in the library and be completely amused. And the final scene amongst the girls had me thinking that perhaps I was too hard on the voice acting in my last review. There was a scene we saw in this year’s trailer which made me cringe, but came off much better once we were given context. The villains however, still need a little work. This being a completely original series means no one in fandom knows where we’re heading, something you don’t get too often as an anime watcher, but I’m completely hooked and anxiously looking forward to the next episode.

RWBY is available to stream via Rooster Teeth and Crunchyroll