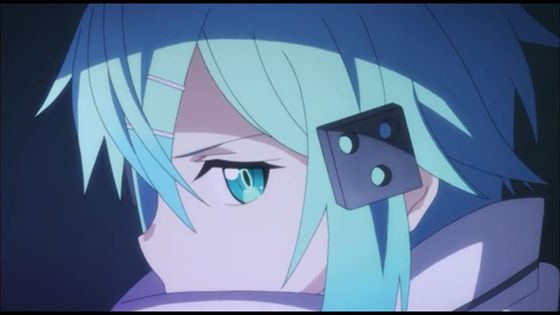 Have you been watching season two of Sword Art Online (SAO)? The new female character, Sinon, demonstrates a strength in-game that rivals that of Asuna in the Knights of the Blood Oath (If you’d like to read more on Asuna, check this out). Sinon’s character development, not being confined to the game like the first story arc, is more multi-dimensional and realistic.

Warning: If you’re not caught up with the show, there will be some spoilers!

Sinon is the best sniper in the VRMMORPG Gun Gale Online (GGO) and the main female character in the ongoing story arc of season two. We first see Sinon by herself in a dungeon, patiently sniping a large ominous monster. When she defeats the monster, she receives the Hecate II, which becomes her primary weapon. It’s interesting and perhaps significant that we see her alone first. In GGO and in the real world, she’s a bit of a loner.

When we see her again, she’s joined a player-hunting party, but stays removed from them physically, her body language conveying distance. With her arms crossed tightly, she avoids eye contact with the other members of the party. She also chooses not to divulge about her real life with other players. When approached by one of the males in the group who acts more like a dog than a man, she turns him down calmly and flatly. This interaction, rather than making her an object to be gained, shows that she has more respect for herself than that 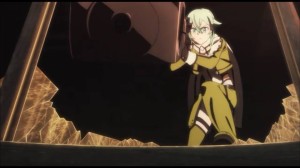 Even though she seems disconnected from her comrades, she is guided by intuition and her connection to her weapon and the game. As her party prepares to attack, Sinon wants to take down the mysterious cloaked figure in the targeted group, as she perceives an “unknown” to be a greater threat than the minigun in view. The leader of the party tells her to take out the minigun carrier first then attack the unknown.

Sinon’s instinct, however, was accurate, and the mysterious man (identified later as Behemoth) revealed an even more dangerous weapon. After her first shot took out the minigun carrier, Behemoth dodged her second shot. Sinon recognizes that her comrades are in danger, and runs to their aid. A brutal battle ensues, with both sides dwindling until just Sinon and Behemoth are left alive. Behemoth fires at Sinon, and hits her leg. This causes her in–game avatar to lose that leg. In the most epic of moves, Sinon fires her Hecate II mid-air, hits Behemoth between the eyes, and then casually makes a perfect landing, even with her one leg.

All of this proves that even though she prefers to keep her distance, she will not abandon the people depending on her. She will persevere and overcome even the most challenging obstacles. Sinon also shows us in this intense scene that she can remain calm and collected under pressure. She has complete mastery of her weapon, being able to use it effectively at 1500 meters distance from the target, or at 5 meters distance. But for all her strength and skill, she still remains humble and motivated. She barely considers the fight a victory, and desires to grow stronger. 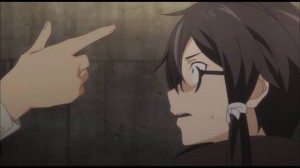 In the real world, Sinon’s name is Asada Shino. Although they are the same person, Sinon and Shino couldn’t be more different. Sinon is strong and powerful, while Shino seems fragile and vulnerable. Shino was traumatized as a young girl, when she saved her mother from a dangerous criminal by taking his gun and shooting him with it. Since then, she has experienced what resembles PTSD symptoms and panic attacks, which make her a target for bullies from her school. The bullies take advantage of her acute sensitivity to guns in order to steal from her and harass her. She seems to only have one friend in the real world, who suggested she play GGO in an attempt to overcome her paralyzing fear of guns. This serves as Sinon’s motivation for growing stronger and becoming better at GGO.

When Kirito enters GGO, he is mistaken for a girl due to his long hair and smaller figure. Sinon runs into him, and helps him get set up in the game and pick out weapons. Sinon is friendly toward Kirito, assuming he is a new female player, which is uncommon in GGO. When her guard is down, she is warm and charming. She’s not behind her Hecate II sniping, or protecting herself from the harassment of male players. Her arms aren’t crossed and she’s not avoiding anyone. She smiles, laughs, and genuinely has a great time. I think this gives us a glimpse of who she really is, as both Sinon and Shino.

When Kirito reveals his true identity (and gender) to Sinon, she slaps him, reassuming her guarded attitude. She tells him to make it to the finals of the Bullet of Bullets tournament so she can defeat him herself. Whether it is distrust, anger, violation, or a combination of the three, Sinon experiences something that changes her demeanor from sweet to severe. I think it will settle into a balance of sweetness and sarcasm as we see their friendship grow. 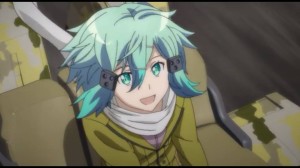 The striking difference between Sinon’s strength and Shino’s vulnerability ultimately creates a more well-rounded and complex female character than the anime world in general is accustomed to. I think this will become apparent if she is able to conquer her fear of guns, merging Sinon’s and Shino’s characteristics into one multi-faceted, realistic personality. My greatest desire for Sinon is that she and Kirito have a positive platonic relationship, and avoid complicating things with more romantic interests.

What do you think of Sinon and Season two of SAO? Tell us in the comments!

1 thought on “Women of SAO: The Strength of Sinon”