The Legend of Korra 3×9 Review: The Stakeout 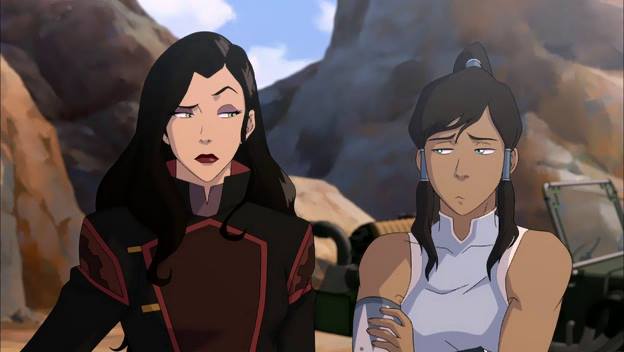 This week’s episode of The Legend of Korra: Change was the most philosophical yet. There was a lot of talk about what it means to be free, along with some visually exciting action sequences. 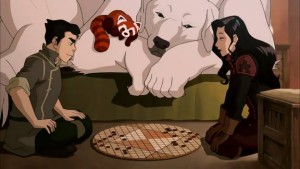 I’m still having trouble trusting Sue. She sent Korra and her friends to track down Ai Wei knowing quite well that Zaheer and his group were after her in the previous episode. Though the friends found out where Ai Wei was hiding, it was obvious something bad would happen by the end of the episode. The Stakeout had a lot of funny scenes courtesy of Bolin. The scenes where he met his fans, kept losing to Asami at Pi Sho, and asked Korra to standardize the rules of the game as the Avatar were quite funny.

When Book 3: Change started Mako’s role in the story looked quite uncertain. He didn’t bring anything useful to the team. However, the writers changed that in the previous episode and continued the trend. Not focusing on the ‘Korra or Asami’ love drama has caused a more likeable side of Mako to emerge. His skills as a detective were quite useful this week. Separating the characters from the love triangle has also allowed Asami and Korra to bond. I like that the writers are focusing on their friendship and not making them fight each other for the affections of a male character. Korra and Asami are independent women, and focusing on their love lives in the most cliché manner won’t do them any favors. I ship those two and Tumblr user Korragifrequests perfectly summed up a scene that happened this week.

Zaheer and his merry band of unique benders were revealed to be part of the ‘Red Lotus’, which branched out from the ‘White Lotus’. For those of you who aren’t familiar, the White Lotus has been around since Avatar: The Last Airbender and they protected the Avatar. The group has been protecting Korra as well. However, Zaheer’s idea of freedom made him join the Red Lotus along with Korra’s uncle Unalaq, the antagonist of Book 2. Korra went to face Zaheer in the spirit world and that’s where the writers impressively handled what it means to be truly free.

According to Zaheer’s school of thought, humans made kingdoms and territories because they wanted to rule and thus eliminate freedom. If a person wants to the world to be truly free, he needs to eliminate the rulers because nature’s true order is actually disorder. There shouldn’t be an Earth Kingdom, or a Fire Nation, etc. People shouldn’t be separated on the basis of their territories. The Red Lotus wanted to kidnap Korra thirteen years ago because they wanted to brainwash her to help them achieve their goals.

How spiritually strong is Zaheer? He’s the only one who was able to communicate through his physical body while still being in the spirit world. No other character, not even the Avatar, has been able to do that.

The way the writers have created the current villains is very impressive. In a sense, they aren’t villains and think they are doing the right thing. They want to free the people of any kind of authority that suppresses them. I could go on for hours regarding the arguments Zaheer presented and how Korra tried to counter them. The way the writers have created the various characters in the series and handled different topics makes me want to see the magic they can produce on a live-action TV show. The world needs more shows that talk about thoughtful topics and where female characters aren’t defined as mere love interests.

The fight sequences were visually stunning as usual. However, the Red Lotus is still too strong for Team Korra. Mako and Bolin couldn’t even scratch Ghazan and Ming-Hua during the fight. Team Aang could’ve easily taken out the current team of antagonists. Katara was able to take out Azula at her most powerful and Ming-Hua wouldn’t have been a problem for her. What’s funny is that 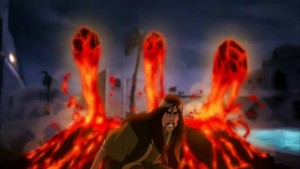 Team Korra is older than Team Aang and is still unable to do anything. The team is just surviving the attacks from the Red Lotus rather than countering them.

Best Bending Award: I would have to give it to Ghazan. His flying lava balls were a very impressive move and looked dangerous. Team Korra’s needs to do some amazing bending if they hope to win this award.

What did you think of this week’s episode of The Legend of Korra: Change? What are your thoughts regarding Zaheer’s goal? Let us know in the comments!

Previous:Comic-Con: HopCon vs. Heroes Brew
Next: Women of SAO: The Strength of Sinon