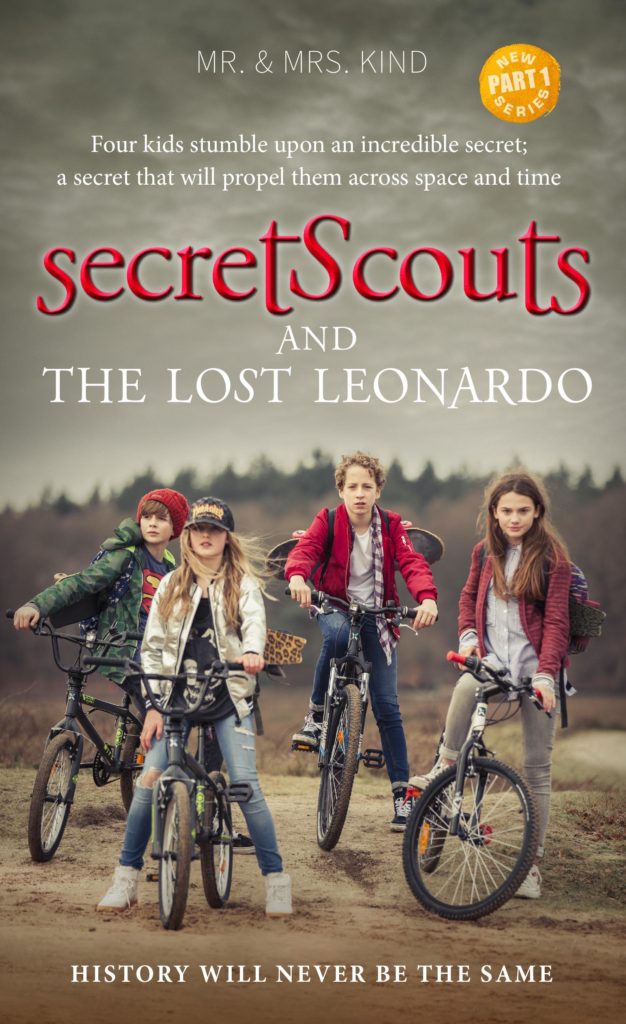 Secret Scouts and the Lost Leonardo by Mr. and Mrs. Kind is a story about young friends finding a secret room which leads them to travel back in time and meet up with the mysterious Leonardo da Vinci. The book serves as an interesting debut for a new series.

I was provided a free copy of Secret Scouts and the Lost Leonardo for review. The opinions are my own.

The adventure begins when sisters Sophie and Lisa along with their friends Tom and Jack find a secret room hidden behind a bookshelf. The kids happen upon an old codex which they think belonged to Leonardo da Vinci. The codex features work far beyond its time including content about how to time travel. Of course, the kids find the time travel device and decide to go back in time.

Tom, Lisa, Sophie, and Jack stumble across the find of a lifetime — Leonardo da Vinci’s codex full of sketches, writings, and calculations. Now they have a choice: do they sell it and become richer beyond their wildest dreams, or do they try to decode the journal and figure out what Leonardo was up to? Tom and Jack want to sell the book, but sisters Lisa and Sophie have other ideas. What they discover within the codex is the science behind time travel. But when they put the calculations to the test, they find out just how dangerous this secret can truly be.

I liked the characterization of the protagonists. The authors were sure to make them sound and act like kids. I grew up reading the Famous Five and Secret Seven series. They inspired my own works as an author and reading Secret Scouts and the Lost Leonardo made me remember Enid Blyton’s wonderful storytelling.

Considering this book is meant for younger (middle grade) readers, I can’t fault it too much for having your traditional plot about kids saving the world. The good thing is Lisa and Sophie aren’t pushed back to make Tom and Jack shine. Each group member has a role to play.

Also, because they are young, I liked how they argued with one another. It will be interesting to see how the main characters grow over the course of this series.

The second book, titled The Missing President, is planned for a Fall 2019 release.

The beginning of the books talks about a number of strange facts. We get to know about how there isn’t a lot of information about what happened to da Vinci between June 1476 and January 1478. He also painted an angel in The Annunciation with lead-free paint which led to the angel being invisible under x-rays.

There is also information about a small abandoned island off the coast of Venice called Poveglia where more than 160,000 victims of the plague died. Hundreds of years later, between 1922 and 1986, the island housed a mental asylum where a doctor murdered many of the patients.

All of the information shared in this story is sure to encourage young readers to read more about certain historical occurrences.

So, if you have been looking for a book which can help teach kids about historical facts in a fun way, you should consider picking up Secret Scouts and the Lost Leonardo.

Releasing on October 23, 2018, it is currently available for pre-order from Amazon, IndieBound, and B&N.