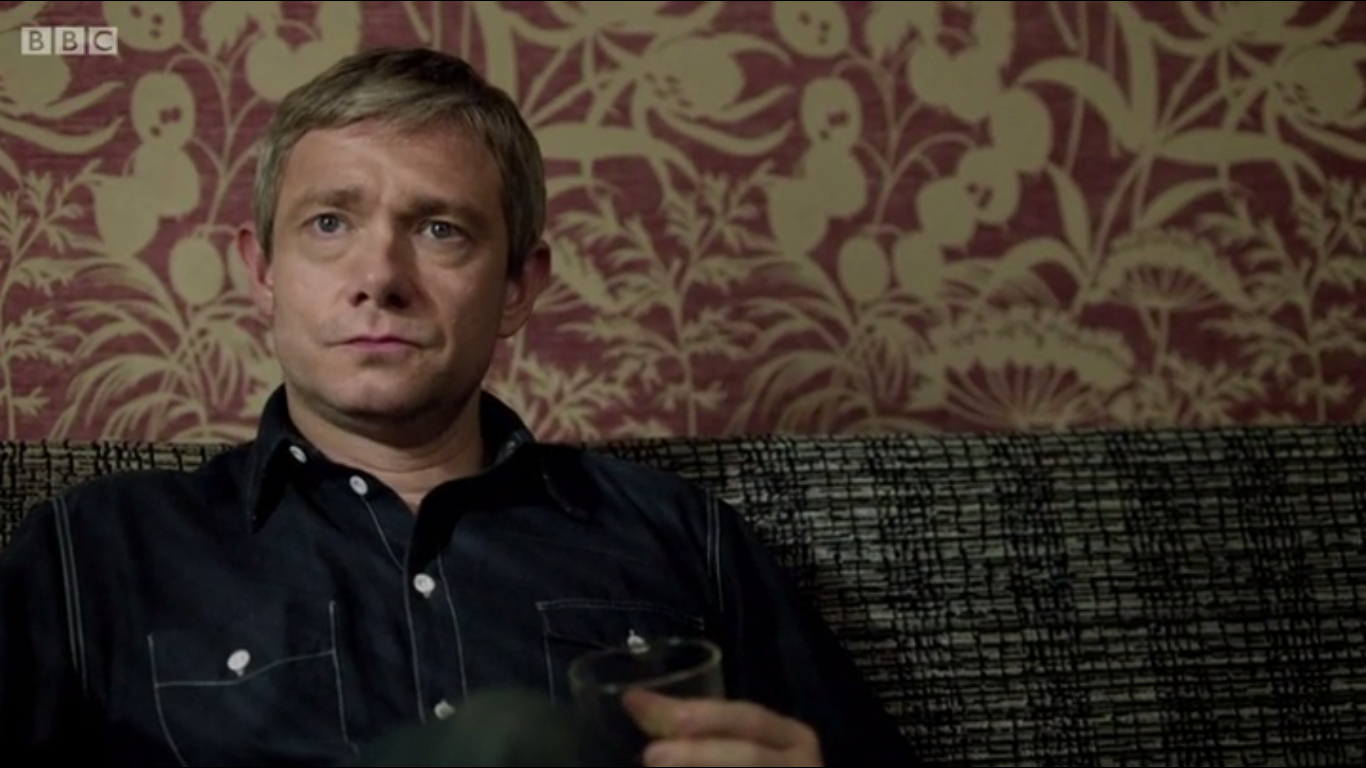 For two long years the Sherlock fandom has waited for new content in our short, but highly addictive, television series and now here on Christmas Eve we get a small seven minute appetizer.  The first episode of season three will air on New Years day, but today we were given the mini episode Many Happy Returns to tide us over until the big show next week.  We’re given scenes with Lestrade, Anderson, and John; as well as that familiar Sherlock leitmotif that lets us know our hero is present.  It was enough to get the blood pumping and get me excited for New Years.

The mini episode starts out with Anderson and Lestrade having a conversation in a pub.  Anderson has become an obsessive conspiracy theorist in regards to Sherlock, which is pretty much a reflection of the state of fandom over the past two years.  I’ve seen many theories regarding Sherlock and countless headcanons about what Sherlock has been doing in his time away.  Anderson has been tracking incidents that he believes are related to Holmes and he theorizes that Sherlock is coming back to London.  It’s amazing how likable Anderson has become now that he’s essentially a reflection of us.  There was a time when he was my least favorite character, even more despised than the villains, but now that I can see the obsessiveness in him that I’ve seen in myself over the past two years I identify with him on a different level.

The second part of the mini episode features Lestrade visiting John and giving him a box of Sherlock’s things that Lestrade found in his office.  John finds a tape in that box of Sherlock talking for Watson’s birthday video, which John watches with a glass of alcohol, a subdued smirk, and a look in his eyes that reflects a feeling of utter devastation.    He once more asks for Sherlock to please not be dead as though that’s all he’d been asking for for a solid two years.  The way Lestrade intentionally points out the disk, the double meanings in Sherlock’s words throughout the video, and the way it ends with a sly wink to the camera leads me to believe that Lestrade is in on Sherlock’s conspiracy somehow.  Then again I may just be slipping into a conspiracy frame of mind, much like Anderson.  Either way, this whole scene was heartbreaking and I just want to give John a big hug.

In a little over a week we’ll get The Empty Hearse, which officially sets off the much anticipated third season.  We may get answers to all the questions we’ve been asking for two years or Gatiss & co may troll us and leave things in limbo.  It’s hard to tell.  I am grateful for this little taste of what’s the come, however, and I’m ready for the season to officially begin.