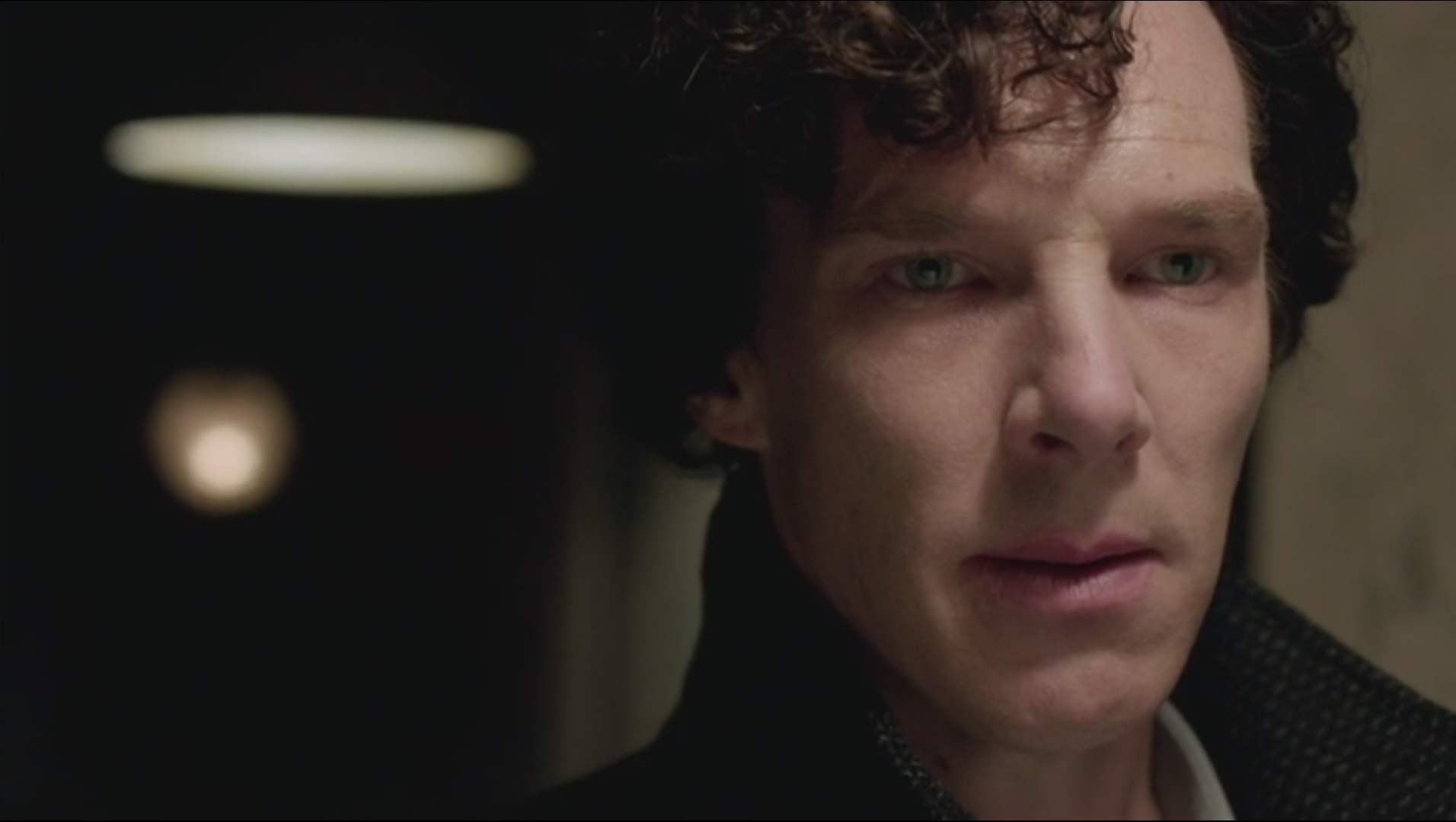 We made it to the finale! Only 12 days ago we were on hiatus and here we are launching into another one. We ended on yet another cliffhanger, which isn’t exactly a surprise with this show. Showrunner Mark Gatiss even warned us about it in advance, but if he hadn’t it would have still been an easy deduction to make. It was definitely a surprising twist, but the episode itself was packed with so many turns and unexpected plot points that it didn’t pack as powerful of a punch as I was expecting it would. That’s not to say it wasn’t a definite cliffhanger that’ll have fans frantically theorizing for the next (most likely) two years, but rather my focus is still so very much wrapped up in what happened during the episode that I’m not quite ready to shift my focus to that just yet. This episode was stuffed to the brim with so many plot twists, surprising character developments, and emotionally moving scenes that I’m a tad overwhelmed trying to form coherent thoughts on it all.  Alas, there were lots of things to discuss so here I go trying to analyze what I’ve just watched even though I’m quite shaken.

One thing that immediately surprised me was Sherlock’s backslide into drug use. We had hints that a drug den would feature in this episode and during the filming many fans spotted Benedict Cumberbatch dressed in baggy street clothes. The line “I am on a case” was overheard by some, but even with all of this evidence I thought for sure that this scene would be a fake out. Right up until Molly confirmed that he’d been using again I was convinced that the show wouldn’t actually go there, but they did. I’m conflicted about their decision to have Sherlock fall back into drugs. On the one hand it breaks my heart that he’d do that and I wish it hadn’t come to that.  On the other I have to hand it to the writers for being able to stir up such strong emotions about his decisions.  It’s very rare for me to praise Steven Moffat’s writing now days, but if his goal was to make the viewer emotional he certainly accomplished it.  Being able to move me in such a way is a sign of successful writing so while I’m not happy with the actions themselves, from a narrative standpoint I think it was successful. I’m not sure if I fully believe Sherlock’s insistence that his drug use was purely for a case, but thankfully he seemed to kick it pretty quickly after being pulled out of the drug den so it wasn’t set up as an ongoing issue for the rest of the episode. 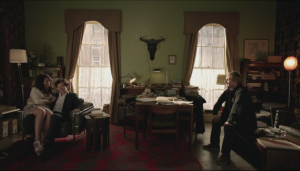 The romantic scene with Janine struck me immediately as awkward, which is exactly what they appeared to be aiming for with the whole ordeal. Fandom was confused. John was confused. I was confused. It just seemed very un-Sherlock. When it was revealed that the relationship was a ruse to gain entry to Magnussen’s office all the puzzle pieces fell into place. The fact that John was having the same reaction to the whole thing as most of us fans were having lends some credibility to asexual, demisexual, or even homosexual interpretations of his character. Janine even later states that she knows “what kind of man” he is, meaning that even she was aware that this was something out of the ordinary for him. However you happen to interpret Sherlock’s sexuality, even characters within the narrative are baffled by typical heterosexual behavior from his character. For people like me who don’t interpret him as heterosexual, this was pretty validating.  Of course they didn’t exactly nail down his sexuality with proper terms, but I’m kind of grateful for that.  Their flippant use of terms such as “psychopath” and “sociopath” make me fear that they wouldn’t handle labeling sexuality any better than they label mental illness.  In fact we’ve seen them use the term “lesbian” for a woman who fell in love with a man, so they don’t exactly have a good track record to start with.  By not labeling Sherlock, but clearly indicating that interest in women is out of the ordinary it allows us as fans to continue interpreting him as we see fit.  For me he is either asexual or demisexual, but homosexual interpretations are also still completely valid.

The biggest shocker of the episode was the Mary reveal. In the original Arthur Conan Doyle canon Mary dies rather quickly after her introduction. I assumed the same would happen here. In the first episode of the season when Sherlock deduces her we see the words “liar” and “disillusioned” flash across the screen, leading many to predict that she would turn out to be a villain. I thus concluded that she would be both revealed to be an antagonist and die, thus destroying all the love that I’ve developed for her character over the past two episodes with no chance of redemption. I hoped neither of these would happen, but how it was done was surprisingly well handled. Mary lives, she wasn’t what she seemed and has a shady past, but I wouldn’t exactly classify her as a “villain.”  Therefore we get to keep Mary, she’s essentially already redeemed before the episode’s conclusion, and John Watson’s broken heart is already on the path to being mended. She spared Sherlock’s life and seems to genuinely want to move past her questionable lifestyle, so I’m inclined to believe that she is generally a good person at heart. What’s even better is that her love for John and her appreciation for Sherlock seem absolutely genuine. She may have lied about who she was, but she absolutely didn’t lie about her feelings towards John and Sherlock. 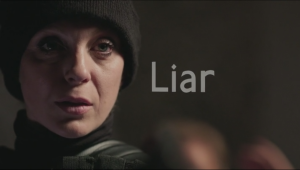 Once more we see a sort of camaraderie between her and Sherlock, which gives me great hope for next season. They both love John, which gives them a great starting point for friendship, but Sherlock seems to have developed a respect for her that goes beyond her ties to his partner. He seems to genuinely appreciate her on her own merit now. Yes, she shot him, but given the circumstances I am surprisingly reluctant to hold it against her. Sherlock seems to feel the same and so does John, so moving forward I’m considering this a non-issue. Only on a show such as this could shooting someone be classified as a “non-issue.” This trio is “addicted to dangerous situations,” as Sherlock put it, so I’m sure they wouldn’t let something as petty as a non-fatal shooting come between them. I’m definitely looking forward to the dynamic between the trio next season and excited that it wasn’t cut short as I was expecting that it would be.  They are a thrill seeking, crime solving, highly skilled trio with a baby on the way.  What an interesting little family they will make.

I thought for sure that shooting Magnussen would be the end of the episode and was pretty shocked that the episode kept going after that scene. Sherlock lived up to his last vow and sacrificed himself so that Mary, John, and their child could live on in peace. He essentially committed murder. Yes, Magnussen was a villain and was threatening them, but “self defense” usually implies that bodily harm was imminent. Magnussen wasn’t holding a gun at them. He was, however, holding threats. He had the power to destroy their lives with simply the facts in his head. Of course this killing feels absolutely justifiable as Magnussen is an antagonistic mastermind who shows no remorse for the lives he has destroyed, but I still feel that “murder” is the proper word for the whole ordeal as accusatory as the term sounds.  Sherlock quite literally destroyed Magnussen’s only weapon to save them. It could have ended there and been an intense cliffhanger that would have driven everyone mad wondering what consequences Sherlock would face for his crime, but they chose to tie up this plot completely. Sherlock is taken into custody and sent on an MI6 mission that would almost surely kill him within 6 months time. Before he gets sent to near certain death a game changer is thrown into the mix. 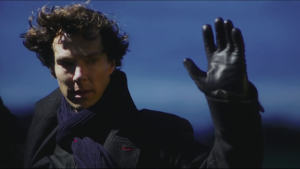 This leads us into our cliffhanger, which was definitely explosive and will have fandom frantically theorizing all during the hiatus. Moriarty appears to be back in some fashion. We all saw him shoot himself in the head at the end of last season. We saw the blood on the ground. That’s an incredibly difficult thing to fake, which leads me to believe this is all a ruse of some sort.  I’d say it’s even more difficult to fake than Sherlock’s fall. I don’t believe Moriarty is still alive even though that is clearly what we are supposed to assume. We have a long time to theorize on how he’s back so this feeling could change, but right now I’m pretty confident with this assumption. While we don’t have dates for season 4 just yet, the pattern for this show seems to be about two years between seasons so I’d say that’s a safe bet. My initial guesses for how this has been accomplished is either pre-recorded messages before his death that someone else is using to carry on his work or that Moriarty has a twin. The first is far too simple for this show and the latter is rather cheap, so I doubt I’m right on either guess. I’ve only been theorizing for a few minutes, though, so perhaps better theories will emerge as the hiatus insanity starts to take hold.

Overall I feel this season was solid. As much as I loath the long waits between seasons, it certainly gave them time to craft a good story. They introduced a well rounded and lovable character this season who has depth, created an intimidating villain in a very short time, and wrapped up the season long plot while setting up next season’s arc.  It’s quite an accomplishment.  The season wasn’t completely perfect. There were problematic elements, many of which I’ve outlined in these reviews, and quite a few cringe worthy moments, even though some of those moments were intended to be cringed at. The vast majority of it all was pitch perfect to me, though, and I’m happy to have all these new elements in our canon.  I’m looking forward to see what the fandom comes up with in regards to fanworks and, of course, I’m looking forward to season 4.