I have been looking forward to watching Shubh Mangal Zyada Saavdhan ever since it was announced. Having seen it, well, while I’m glad it offered some good laughs, I think the overall script could have been a lot better.

This review contains spoilers for Shubh Mangal Zayada Saavdhan. You have been warned.

The promotional content for this film made sure to let everyone know it won’t be stepping back from showing a level of queer representation that’s similar to what the audience expects while watching straight romantic comedies. The queer lead characters, Kartik (Ayushmann Khurrana) and Aman (Jitendra Kumar), are very much in love with each other and don’t hesitate to show it through some physical intimacy. So, kudos to the actors going all the way. There’s a kissing scene between the two in the first twenty minutes, which I wasn’t expecting to see at all.

The premise deals with Aman’s family asking him to come back from Delhi to attend his cousin’s wedding. Due to certain circumstances, both Aman and Kartik board the train taking Aman’s family to the wedding venue. It’s during said train ride that Aman’s father sees the two kissing each other.

Of course, Aman’s family isn’t happy about the revelation and what follows are hilarious situations where Aman’s father constantly tries to keep his son away from Kartik. The kissing scene (different from the train kissing scene) that was promoted in the trailer ended up being part of an awesome little sequence in the film.

The comedic elements are definitely scattered well throughout the film’s running time. Some of the standout moments are when Aman’s parents (played amazingly by Neena Gupta and Gajraj Rao) talk about possibly going to jail because of Kartik as well as the scene where they both come clean about loving someone else before getting married to each other.

Where the narrative drags (and also kind of becomes cringeworthy on occasion) is when writer/director Hitesh Kewalya decides to share a message with the audience. I’m all for films speaking their minds, but there’s an art to doing so. In my opinion, Shubh Mangal Zyada Saavdhan became too forceful with its messaging of queer acceptance. The moment some pro-LGBTQ+ statement was made by a character, I felt I was watching a completely different film due to the tone drastically changing.

The movie using a bit of subtlety in its messaging would have worked in its favor. For example, the charming scene where Kartik tenderly held on to Aman while stopping at a traffic light (on a motorcycle) spoke volumes compared to a lot of the dialogues that were delivered. 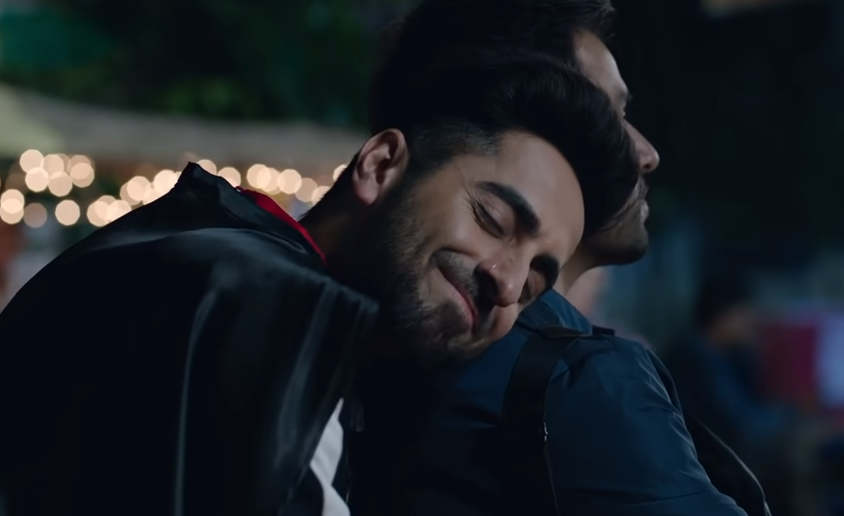 I understand that the team wanted to reach out to people who were likely homophobic or confused about the LGBTQ+ community. That’s probably why certain messages and themes had to be spelled out to hopefully make such people be more accepting. But still, I think it could have been handled better.

In my opinion, showing Aman and Kartik living happily in their house and letting us see how they first met and fell in love would have helped.

I have to add, I was a bit conflicted about how Aman’s father was portrayed. He came across as too self-centered. I took issue with him beating up Kartik because he wanted to keep him away from his son. He also seemed oblivious to the feelings of the rest of the family members. While Aman’s father kind of made up for his behavior by the end of the film, I think his homophobic actions weren’t addressed properly.

Also, the numerous subplots dragged down this project. There’s just too much happening in Aman’s family. From his cousin not finding a good man to marry, to the disagreements between his father and uncle, to his fiance-to-be planning to run away, and much more. I appreciated the film finding some time to address issues pertaining to the hardships certain women face (even in this day and age), but it all came across as too undercooked.

Having said that, I was genuinely surprised when I found out this story took place all the way up to the day after the Section 377 verdict in 2018. I really thought this movie was going to be about how even though having queer sex wasn’t illegal in India anymore, certain parts of society still deemed being a member of the LGBTQ+ community as unacceptable.

Here’s to hoping India decides to create queer content that feels more modern. I would like to see queer stories taking place in the 2020s. With the second season of the highly-enjoyable and queer-centric Made in Heaven coming to Amazon Prime Video in 2021 (unless the premiere date changes to an earlier date), there’s still a long time for us to wait for such stories to be told.

Being a Bollywood offering, I have to talk about music. The songs went well with the story. My personal favorite ended up being ‘Mera Liye Tum Kaafi Ho’ sung by Khurrana. ‘Gabru’ was a fun one, too.

All in all, even though I found this film to have certain narrative issues, I have to say I had an enjoyable time watching it. The laugh-out-loud moments made up for the script issues I saw. Also, having a mainstream film address such a topic is a feat that should be appreciated.

From what I understand, Shubh Mangal Zyada Saavdhan seems to be on the right track box office-wise. Analysts think it can become a financial success.

As far as my opinion goes, I wouldn’t be against Kartik and Aman returning for a sequel. As I said, I would like a mainstream movie to tackle queer issues that still persist after 2018’s Section 377 decision. There’s continues to be a lot of discrimination against the queer community and I think Kewalya and his team can tackle it all with their unique sense of humor.

Also, on an interesting note, President Trump decided to tweet about the film for some reason. He sure likes surprising people in the most random of ways. 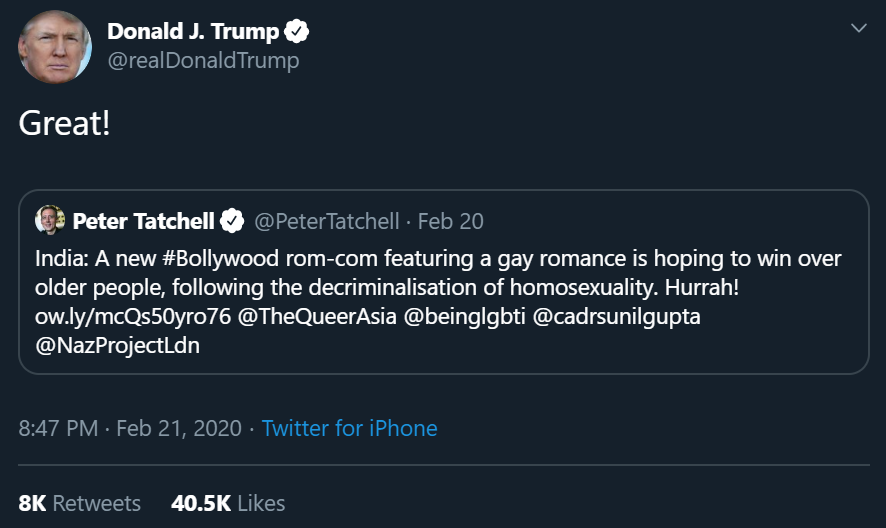 Have you watched Shubh Mangal Zyada Saavdhan? Let us know.