Sins, Spells, and Sarcasm: Why You Should Read ‘Sandman Slim’ 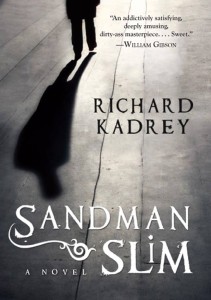 The Sandman Slim series by Richard Kadrey tells the story of a man who comes back from Hell to seek revenge on those who sent him there.

I know what you’re thinking:  Judeo-Christian mythological stories are a dime a dozen.  Ever since John Milton wrote his Biblical fanfiction, Paradise Lost, everyone has wanted to put their own spin on heaven and hell and angels and demons.  Pop culture is so saturated with it that you’ve probably at least skimmed through the Book of Revelations itself.  Personally, I’m in love with stories that draw from Biblical lore, but I expect many of you are weary of it.  And of course there is no shortage of white, male, anti-hero protagonists.  So why should you invest in yet another sarcastic jerk blaspheming the Bible?

Because Sandman Slim wantonly kicks its competitors in the teeth and walks over their unconscious bodies.

The series follows James ‘Sandman Slim’ Stark, a man whose magical organization, the Sub Rosa, sent him to Hell.  He finds his niche battling in the arena – a Hellion gladiator-style melee – and serving as a hitman for one of Lucifer’s generals, only to give them the slip and return to Earth when his girlfriend, Alice, is murdered.  The first book, Sandman Slim, begins with Stark awakening in Los Angeles after an 11-year stint “Downtown.”  He wastes no time hunting down former Sub Rosa members to seek revenge, especially the man who instigated the betrayal:  Mason Faim.

Sandman Slim first crossed my radar last summer through the recommendation of an old friend.  I had just finished a two-week marathon of Supernatural, and I needed a new obsession.  She said that if Supernatural had caught my attention, it was imperative I read this series.  There were three books published at the time, and I blew through them all in about a week.  Superficially, the series did read like a season of Supernatural, if Supernatural aired on HBO and not the CW.  We first meet Stark after he claws his way out of Hell, not unlike Dean did in season 4.  The mythos takes a cynical view of Heaven and Hell and God, making them just as flawed as humanity, and adds a heaping helping of magic and monsters.  But that is where the similarities end.

The series’ biggest draw for me was its prose:  a first-person narration from the vantage of James Stark.  More notably, it is told in the present tense.  Rather than Stark recalling events that have happened to him, he gives the reader a play-by-play of his thoughts, feelings, and events as they happen.  There is no better person to narrate this story than Stark.  He is sarcastic, witty, irreverent, and makes more pop culture references than Dean Winchester.  He could turn the mundane act of making toast into a culinary spectacular.  With Stark at the helm, the story never lulls for a moment.  (Word of caution:  Stark curses.  A lot.  He does so colourfully and creatively, and it feels completely organic, but it is profuse and not for the easily offended.)

As a character, Stark has more to offer than your typical anti-hero protagonist.  Certainly, he is an asshole with a smart mouth whose shining personality has made its fair share of enemies, but what makes Stark notable is that he is not unrepentant.  After years of being tortured in Hell and fighting for his life, he finds it difficult to adapt to civilian life, but he does not cling to his negativity.  He cares about others and can empathise with friends and enemies alike.  He even manages to forgive and show mercy.  Rather than attempting to repress his emotions to maintain a “tough guy” act, he allows himself to express affection and concern and sadness and anger.  It’s a refreshing take on a somewhat tired character trope.

Stark isn’t the only character worth investing in, though.  Kadrey excels at crafting a host of interesting, dynamic characters with lives of their own:  Vidocq, the immortal alchemist thief; Candy, the reformed monster girl; Allegra, the rental store manager with nerves of steel; Dr. Kinski, the doctor with a dark secret, and Kasabian, a former Sub Rosa member who manages to be useful even as nothing more than a head (it makes sense in context).  Stark may be the narrator, but you really get the sense that these characters exist outside of his consciousness and are not reliant on him to progress in their own journeys.  Even Alice, Stark’s Lost Lenore, has significant character development beyond “dead girlfriend to motivate the protagonist.”

Sandman Slim also strikes a neat balance between magic and modern technology.  Stark is an extremely talented magician (not a wizard – that’s kid’s stuff), but the utility of his magic is limited because he BS’s his way through spells like a university student the night before a deadline.  To use many of the really worthwhile spells, he would have to take the time to learn them.  Instead, he resorts to magical knives, Hellion weapons, and good old-fashioned firearms as his primary means of defense, which are arguably more practical in a fight anyway.

If you embark on the series, I recommend you at least complete the first trilogy (Sandman Slim, Kill the Dead, Aloha from Hell).  The plot of the first story can be uneven at times, but Kadrey gains momentum and skill as he arcs the narrative over several books.  Many seemingly neglected plot points introduced in Sandman Slim do, in fact, pay off, but not until later books.

If you are looking for a tempered, philosophical book about the nature of humanity and its relationship with the divine, then you may want to pass this series over.  But, if you want a balls-to-the-wall fantasy extravaganza, then pick up a copy of Sandman Slim and dive in to the mayhem.