Zombie Media: the Other Green Meat

Zombie movies: love them or hate them, they seem to be everywhere these days.  I’m sure you’ve thought of at least one by the time this sentence ends.  Maybe you have a favorite, maybe you hate the thought of them (if that’s you, turn around and run), but you can’t get away from them.  But what about other media?  Can you think of a zombie song?  A Book?  After you read this article, you’ll be able to.

Music:
Broken Bride
Your wife dies in a horrible car crash and you miss her terribly.  Luckily, you’re a scientist so you work for

fifteen years inventing a time machine so you can go back and stop her from leaving the house.  The first time you try your machine it sends you so far back in time you have to fight off pterodactyls.  Then it shoots you in the future and, wouldn’t you know it, it’s a zombie apocalypse.  But isn’t this how these things always go?  This is the story to Ludo’s Rock Opera, Broken Bride.  Don’t worry, I haven’t given it all away.  This all happens in just the first two songs.  On a special note, the second song, Save Our City, has what has to be my favorite song lyric of all time:  “anything can be a weapon if you’re holding it right”

So hey man, check this out,
Downtown is a riot,
Somethings spreading through the crowd,
Try channel 9,
I‘m pretty sure they’re heading
Straight for this part of town

An anthem for zombie killing, this fast-paced song will hype you up before the slaughter before slowing down a bit to tell a story of lost love, then pep right back up.  It doesn’t end with triumph though, you get the definite feeling that the ‘long night’ won’t have a happy ending for our narrator.

Jonathan Coulton – RE: Your Brains

A satire of the false-politeness of office life, RE: Your Brains pits zombies against humans in what has got to be the most civilized zombie attack in history.

The Forest of Hands and Teeth by Carrie Ryan
Living surrounded by a fence every day of your life, the moans of the dead inescapable and fear of a breach constant.  The only comfort a questionably moral sisterhood of nuns who rule your entire world.  This is the life of the protagonist, Mary, in Carrie Ryan’s novel The Forest of Hands and Teeth. After Mary’s mother turns and her brother sends her from home, she is forced to bed succor from the nuns by promising to become one of their own.  Many mysteries are reveled and none are answered before a zombie attack on the village forces a small group of survivors, including Mary, her brother, and her two suitors, to flee. What they find outside their village and the truths Mary must face are almost more dangerous than the zombies.  Almost.

World War Z: An Oral History of the Zombie War: 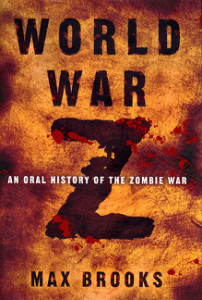 In Max Brooks’ World War Z, (a sequel to his satirical manual on how to survive a zombie apocalypse) ten years after the end of the decade-long World-Wide Zombie war, a UN Agent publishes an oral history of the bloody war and the time directly preceding it.  He had been all over the world collecting data for the United Nations Postwar Commission, but felt that these real-life stories had to be shared beside the dry facts of the war.  The book takes us from the first outbreak to the thick of the fighting and through to the aftermath.  Through narrators from the doctor who possibly treated Patient 0, to feral children abandoned by their parents; from army NCO’s to a Hollywood director.  WWZ chronicles a very real way the world could respond to a zombie apocalypse.

Hopefully I’ve piqued your interest and inspired you to search out new ways of enjoying the horrible undead cannibalistic creatures we call zombies.