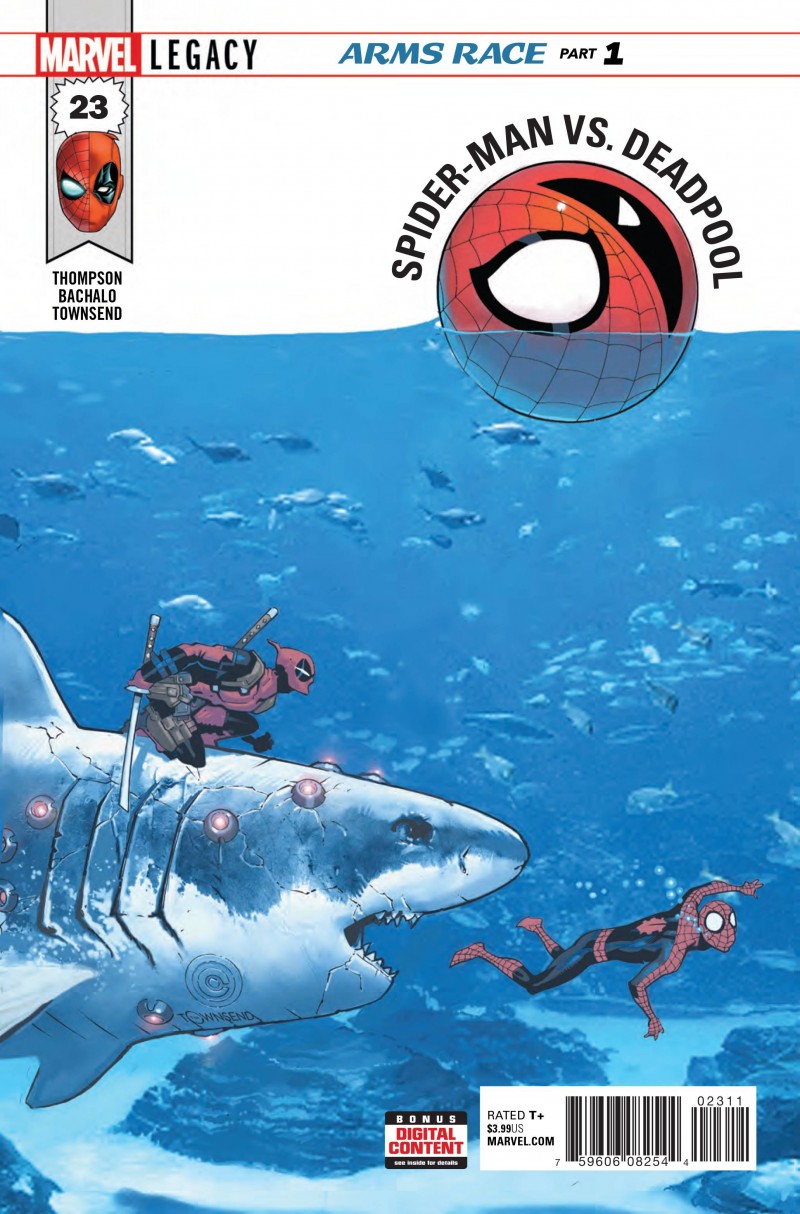 Spider-Man vs. Deadpool issue #23 is full of action, humor, and all the pop-culture references one would expect from a Spider-Man and Deadpool comic. The banter is fun and the story easily keeps your interest.  I’m glad to see this series continue on under Silk writer, Robbie Thompson.

Anyone who has read my reviews or knows me well, knows that my favorite comic book writer is Robbie Thompson.  When Silk ended, I was very disappointed. While Thompson still had a few other series, I was curious about what he’d write next. As a huge fan of Deadpool, it was always a dream of mine to see Thompson write the “Merc with the Mouth.” So, I’m sure everyone could imagine my excitement when I first caught news that Robbie Thompson would start writing the Spider-Man/Deadpool comic series. I was ecstatic, and I’m very happy to say that Thompson’s first issue of the comic did not disappoint.

For me, the best part of any Spider-Man/Deadpool comic is the banter between Peter Parker and Wade Wilson. (Though it always is kind of surprising to me, and definitely hilarious, that Wade doesn’t know that Parker is Spider-Man. In fact, he doesn’t like Peter Parker at all.) In this issue, we have Deadpool referring to Spider-Man as his best friend, which allows him to come on to Deadpool’s ship with no issues. Spider-Man tracked Deadpool down in the first place to bring him in for having killed Phil Coulson on Captain America’s orders. Needless to say, Spider-Man doesn’t get very far with all of Deadpool’s antics. 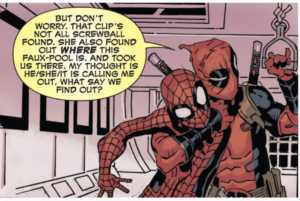 The best thing about any good Deadpool comic is the humor and the breaking of the fourth wall, which Deadpool is so famous for. Thompson did an excellent job with this aspect of Deadpool, which didn’t come as a surprise to me, being familiar with his writing. Deadpool broke the fourth wall making reference to the Deadpool actor, Ryan Reynold’s wife Blake Lively in one panel. In the “What Happens Next,” portion of the comic, Deadpool likened himself and Spider-Man to Sam and Dean from the TV series Supernatural, which Robbie Thompson used to write for. He also made an amusing Game of Thrones reference.  Deadpool also did not fail to acknowledge the fans of the Spider-Man/Deadpool ship saying that he should take a Snapchat of himself and Spider-Man hanging out in his bedroom where the “magic happens.” (Spider-Man responded that no one wanted to see that. Deadpool told him he must have never visted Tumblr!)

Overall, I was very happy with Thompson’s Spider-Man vs. Deadpool debut.  It had the perfect balance between action and humor and I was thoroughly entertained from beginning to end.  I can’t wait to see what adventures await Spider-Man and Deadpool next!