“SpongeBob SquarePants: The Best 200 Episodes Ever!” Coming to DVD this July! 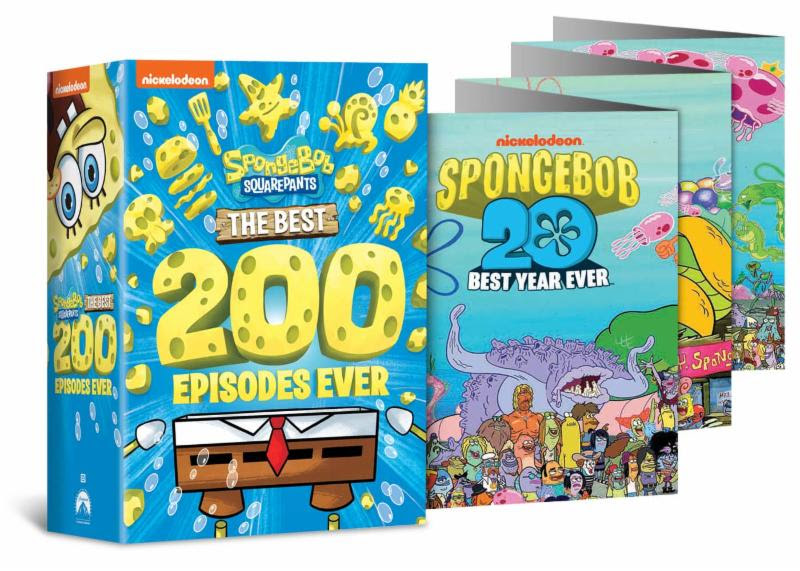 Fans of SpongeBob better get ready to celebrate 20 years of “the world’s most recognizable yellow sponge” with a special DVD release, the SpongeBob SquarePants: The Best 200 Episodes Ever!

The upcoming SpongeBob SquarePants DVD collection, made up of two box-sets, will be available exclusively on Amazon Prime Day on July 15, 2019, followed by a nationwide release on August 27, 2019, wherever DVDs are sold.

Each DVD comes with the special-edition 20th-anniversary poster, which was created specifically for Nickelodeon San Diego Comic-Con and features all 760 characters and creatures that have ever appeared on the show.

Fans are all set to be lost in “the zany and wonderful world of Bikini Bottom and relive every “F.U.N.” episode from the first nine seasons including classic episodes such as “SpongeBob You’re Fired,” “It Came from Goo Lagoon,” and “Mermaidman Begins.”

The running time for the entire collection is 75 hours and 33 minutes. The audio is Dolby Digital English Stereo. You can own the special collection for SRP $76.99.

This animated show was created by marine science educator and animator Stephen Hillenburg for Nickelodeon. According to reports from 2017, it has generated $13 billion in merchandising revenue for Nickelodeon. Yes, SpongeBob is a billionaire.

The series debuted back on May 1, 1999. As of yet, it’s currently airing season 12 and has broadcasted 246 episodes. This show has been nominated for (as well as won) several awards.

To celebrate the franchise’s 20 years of success, SpongeBob SquarePants will be attending SDCC 2019. Make sure to read about all the panels if you are interested.

Of course, The Geekiary will be attending SDCC 2019. So, don’t hesitate to say hi.

I was never a big SpongeBob SquarePants fan, but I have enjoyed certain episodes.

Will you be picking up the upcoming DVD release?