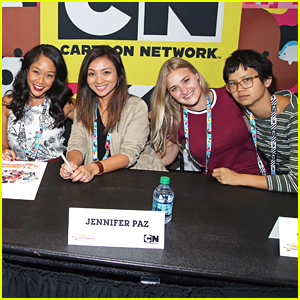 The Steven Universe panel at New York Comic Con revealed tantalizing details about what’s to come on the show. The main focus of the event was information about the upcoming episode “Gem Harvest”, set to air some time this November.

Fans have been speculating about this one for a while, thanks to Peridot’s ominous line about ‘harvesting’ all the way back in “Catch and Release”. It seems that the interest wasn’t undeserving; while the clip they showed from was relatively cute and sweet, the episode is going to be a full half-hour special. The last (and only other) one of those wa 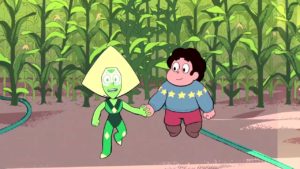 s the emotional gut-punch “Bismuth”. There’s sure to be something big just around the corner.

We also got information on a different upcoming episode: “Three Gems and a Baby”. If that title wasn’t enough to tip you off about its plot, Rebecca Sugar and Tom Scharpling (voice of Greg Universe) also sang a song from the episode, entitled “I Could Never Be Ready”. Looks like we’re getting another flashback episode. This one will focus on the days leading up to, or the immediate aftermath, of Steven’s birth and Rose’s death. Prepare your tissues.

In addition to these teasers, the panel also featured lots of fun discussion and tidbits from the guests, which also included Jennifer Paz (Lapis), Shelby Rabara (Peridot), Charlyne Yi (Ruby), AJ Mikaela (Stevonnie) and Kat Morris (show director). Here are a few of the highlights: