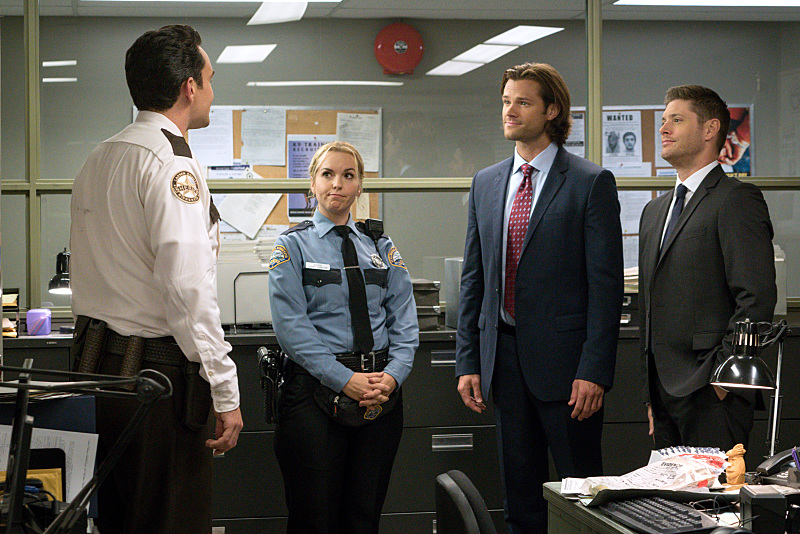 Donna is back!  It’s no surprise that her return thrills me to the core.  She’s part of my Wayward Daughters Dream Team, after all.  But if it weren’t for her inclusion in “Plush”, the episode may have been a complete loss.  The plot was pretty standard and the ‘creepy’ antagonists were a tad too cliche for my taste, but it’s hard to be bored with Briana Buckmaster straddling the line between adorable Midwesterner and badass sheriff.  Seeing her elevate the episode to a whole new level makes me root for her and the rest of the Wayward Daughters to get their spin off even more. 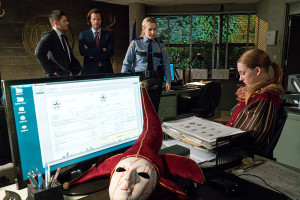 But before we go any further, I’m going to have to side with Sam here.  Clowns are evil.  No more clowns, please.  I can handle anything else this show throws at me.  Vampires? Demons? Lucifer? Whatever.  But the moment Sam got stuck in the elevator with that clown I could feel his pain.  They are the most horrifying things on earth and the creepy clown made me want to cry.  Scary clowns are a great big pile of NOPE.  I’ll pass.  Thanks.

Now that the horrifying clown situation is out of the way, let’s get back to celebrating Donna.  As Sam says, with three hunts under her belt, she’s a true hunter now.  She even lit the match for a traditional Salt and Burn.  Donna’s earned her spot as a regularly occurring character just like Jody, and I couldn’t be happier.  We also saw a slightly different side to her this week.  She was frustrated, a little bit sassier than usual due to her stress, and finally ‘in the know’ instead of being a confused bystander to the world of hunting.  The character is definitely evolving and I hope she gets brought back more so we can see her arc continue.

I’ve grown a bit distrustful of this show and long-living female characters, though, so I’m beginning to get concerned that Donna, Jody, and Claire may meet brutal ends instead of becoming regularly occurring characters or getting their own spin off.  I trusted this show with Charlie, and look what happened.  But you know what?  We haven’t gotten there yet.  If any of these characters meet their permanent doom I’ll release my righteous fury at that time, but right now I’m going to bask in the awesomeness of Sheriff Donna. Ah, feels good.  More please.

Beyond my fear of losing a character I’ve grown attached to, I also fear the end of the episode may have signaled the return to a consistent pattern in the show that I’ve grown tired of.  Dean tells Sam to not touch the cage, but the look in Sam’s eyes made me think he wasn’t going to heed that warning.  I hope we don’t get another half season of the brothers drifting apart, lying to each other, fighting, and then making up right before the climax of the season.  It’s a really boring pattern and I don’t think any fans enjoy going through these motions over and over again.  Let’s break that pattern and do something new.

As I said, overall this episode was greatly elevated by Donna’s presence, but it was still a run of the mill Salt and Burn.  The only reason it was better than the others was because we got to enjoy a character that we haven’t seen in a while, but if that element was removed it would have been completely forgettable.  Even Sam’s hilarious reaction to that clown would have been forgotten five minutes after the episode ended.  I think this proves that the show needs to learn how to keep its beloved secondary characters around, especially the women, because they can take an average episode and make it something great.  I only hope the positive feedback gets that message across loud and clear.

Previous:Black Butler: My Descent Into One HELL of a Story
Next: POLL: The Shipping Games