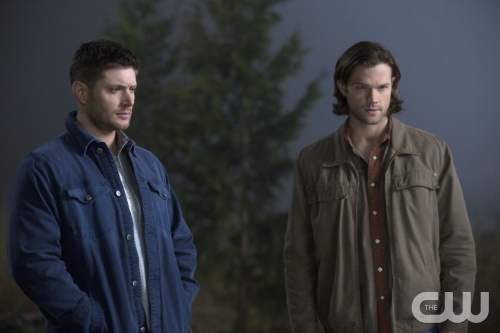 This episode marked the return of Crowley and, subsequently, the return to the actual overarching plot of the season.  On that front, I was very happy about this episode – I make no secret of the fact that I prefer the overarching plot and returning secondary characters over monster-of-the-week episodes with one-off characters that we never see again – but the level to which I enjoyed this episode was actually surprising to me, considering that these particular writers have produced some of my least favorite episodes from the entire show.  They did “Route 666” from season 1, often panned as the worst episode of the entire series, and “I’m No Angel,” which was upsetting to many people for various reasons.  A large part of my enjoyment of this episode can probably be attributed to the incredible acting talent of Mark Sheppard.  He’s truly an amazing actor and I’m always delighted to have him on my TV screen. 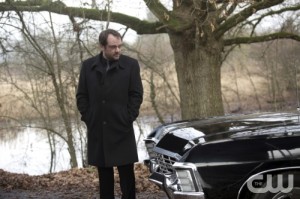 It’s been almost two months since Crowley last appeared on Supernatural.  He always adds a welcome levity to any episode that he’s in, a levity that is very uniquely ‘Crowley.’  In Blade Runners, we see right away that he has Dean listed as “Not Moose” in his phone, which was a dash of humor that set the episode off on the right foot.

This season, Crowley’s plot is allowing Mark Sheppard to stretch his acting chops a bit.  I know, from seeing some of his other work, that he’s an incredibly talented man – but in the past, Crowley has been a role that relegated him to being the ‘snarky antagonist’. Seeing him desperate for blood injections and getting emotional has been a big treat.

In addition to the incredible scenes with Crowley, we got to revisit the Mark of Cain plot line, and  Jensen knocked it out of the park with his scenes at the end of the episode.  We knew right away that it was a huge deal for him to take on the Mark, but that plot line has essentially been ignored for almost two months. It struck me as odd that such a heavy plot point could be set aside for so long, but I suppose that’s the curse of having a show with so many episodes per season – you’ve got to pad your seasons with monster-of-the-week episodes and brush aside more important story lines for extended periods of time. At last we are now finally seeing that the Mark is having an adverse affect on him, both physically and psychologically. We’re back in action, and I hope they continue to focus on this plot and the effect the Mark is having on Dean in the next several episodes. 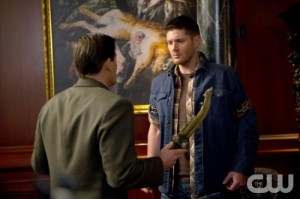 Blade Runners also briefly revisited Abbadon, though technically she didn’t make an actual appearance in this episode.  I’m rather conflicted on the Abbadon vs Crowley war, as I love both of these characters very much.  Yes, they’re villains, but I still find myself enjoying the hell out of their stories.  Abbadon left Crowley an ominous message at the end of this episode, so it shouldn’t be long before she pops up on screen again.  However this war ends, I’m really happy that it’s given us the opportunity to have two awesome antagonists this season.  (I just hope it doesn’t end with either of them permanently killed.  I will cry.  Heavily.)

We’re nearing the end of the season and our plot lines are going to start working their way toward some sort of resolution.  The finale will air in mid-May, which gives us just a little over two months for things to wrap up.  There are still a few weeks of hiatus in the near future, as well as the episode directed by Misha Collins, and then the backdoor pilot for the Supernatural spin off Bloodlines (recently renamed from Tribes).  There is certainly a lot to look forward to in the next couple of months!