What’s Up with Dakota Fanning Allegedly Playing a White, Muslim Ethiopian in “Sweetness in the Belly”? 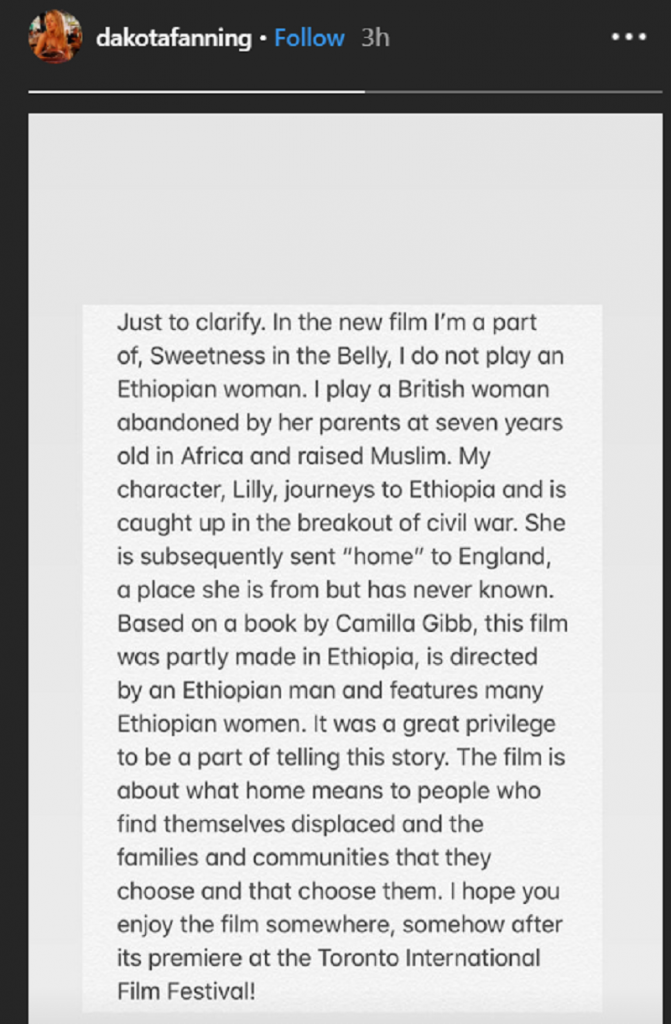 Dakota Fanning on her role in “Sweetness in the Belly” (Instagram: dakotafanning)

Talented actress Dakota Fanning’s new movie Sweetness in the Belly seems to be making headlines for all the wrong reasons. Headed to the Toronto Film Festival, the film was reported to feature her playing the role of a Muslim Ethiopian who happens to be white.

It seems like a whole lot of people were quick to judge (on Twitter) when news about Fanning’s role was shared by Deadline. After Fanning took to Instagram to speak her truth, the publication updated their headline to match what the story’s about.

However, due to the initial headline, many thought the upcoming movie was another unfortunate example of whitewashing in Hollywood. Why wasn’t an actual actress of color cast for such a role?

Was Scarlett Johansson not available? (It’s a joke! Don’t come for me. She’s just horrible.)

Well, I’m here to set some things right, even though I still believe Sweetness in the Belly is likely very problematic. I’m a fan of Fanning, though.

The film is based on a book by author Camilla Gibb. From what I can tell, Fanning plays the role of Lilly. She’s of British descent and was abandoned by her parents in Africa when she was just seven years old. Lilly is raised Muslim. She’s caught in a civil war when she journeys to Ethiopia. She’s sent back to London and ends up helping the Muslim immigrant community.

Yeah, Sweetness in the Belly is ready to be another ‘white savior’ narrative that has been created as potential Oscar bait.

People of color around the world have to wait for their white savior to lead them to freedom. I, a person of color, understands that. And I greatly appreciate Hollywood always reminding me of my place.

The film is directed by Zeresenay Mehari, so there’s that. But still, considering what the main story is about, the ‘white savior’ trope criticism still applies.

And you know what? I don’t blame certain people from continuing to make such movies. The track record of the Oscars has continued to show the Academy loves such content. Green Book won the Oscar for Best Picture even though it was met by a lot of criticism from the African-American community.

It’s clear there are members of the Academy (as well as in the general public) who like watching feel-good movies about how whiteness can help people of color.

So, unless the Academy changes from within, movies like Sweetness in the Belly will continue to be made.

TOPICS dakota fanningOscarssweetness in the belly

Previous:House of X Issue 4 “It Will Be Done” Review: We Got Storm Doing Something New!
Next: There Are Two New Disney Subscription Boxes If You Need More Mouse In Your House