The Girl of Steel – “Supergirl: Being Super” Graphic Novel Review 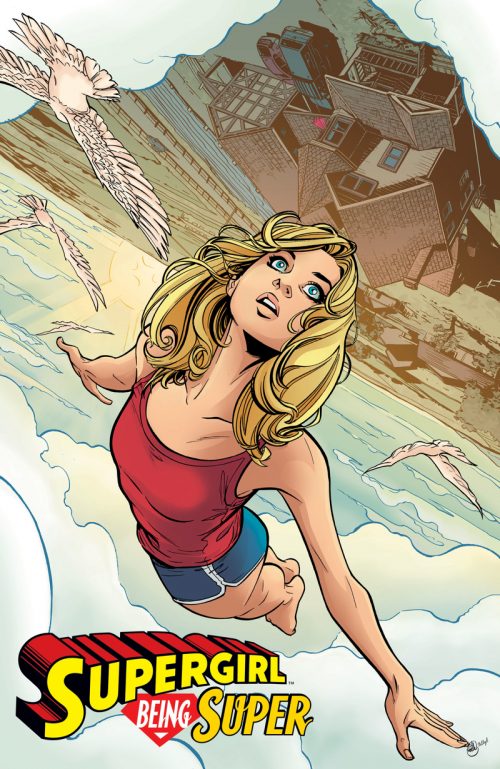 Supergirl: Being Super is a coming-of-age graphic novel for young adult readers. In this new origin story, Kara Danvers is turning 16 and facing the same things that all teenagers do; only she has superpowers and is from another planet. That makes figuring out the whole teenaged thing even more difficult, especially when those powers put Kara and her friends in danger!

I was provided with an eARC of Supergirl: Being Super from DC Entertainment. All opinions are my own.

Unlike many of the other coming-of-age young adult graphic novels I’ve read from DC, I must admit that I did not know much about Kara Danvers or her backstory. My main exposure to her character was through watching a handful of episodes of the Supergirl TV show. So, for me, reading Supergirl: Being Super was my introduction to the character. Which is kind of nice, considering these young adult graphic novels were written with the intention of bringing in new readers to DC Comics.

Supergirl: Being Super begins with Kara trying to explain her life to the reader and not knowing where to begin, because her story is complicated. She feels like no matter where she beings, it wouldn’t make any sense at all. In many ways Kara is a typical teenage girl: dealing with zits, running track, and hanging out with her friends Dolly and Jen in the local diner after school.

Her friends are not complicated. But Kara, she doesn’t even technically have a birthday. She has a pod that her parents found her in in the cornfield. She has dreams every night that she doesn’t quite understand, but believes that they are the key to her past. Strange things are happening to her lately that she also doesn’t understand, but she feels like something is wrong. Kara doesn’t know how much her life is about to change.

During one of Kara’s high school track meets there is a large earthquake. She and her two friends are in danger as a result. Kara ends up using her super strength in front of her friend Dolly when rescuing her. But unfortunately, Kara was not able to save her friend Jen. Worse than that, she slips out of Kara’s grip only to fall to her death.

From there things begin to spiral for Kara. She is dealing with the strange things going on with her body along with her grief for her friend. In the midst of that, some people she thought she could trust turn out to be untrustworthy and try to use her for her powers. But not all hope is lost, and Kara will soon have the opportunity to learn more about who she is and where she comes from. She is not alone.

The writer, Mariko Tamaki, is a New York Times best-selling author. Tamaki does a really good job bringing you into Kara Danvers’s world. Kara’s friends and family are well fleshed out with their own distinct personalities, motivations, and ambitions. She took great care in portraying even the villains as complex characters that you could feel sympathy for. From their perspectives, they were only trying to help people and keep themselves safe, too. Their motivations may have been good and/or honorable, but their paths to getting there were not. I always appreciate when a writer makes you care about all their characters and not just the protagonist(s).

The artist, Joëlle Jones, is Eisner Award-nominated, and it’s easy to see why. The art throughout is beautiful, detailed, and drawn with great care. Jeremy Lawson’s use of color is reminiscent of the color pallet used in another DC young adult novel, The Lost Carnival a Dick Grayson Graphic Novel, with a lot of blues, yellows, and gold tones to offset the different feel for different parts of the story. It’s a minimal use of color, but it’s very effective in setting the mood. I also appreciated that the color red was used throughout for Kara (such as her shirt and backpack) which plays homage to her Supergirl colors. I feel that the art and use of color really complimented the story well.

Supergirl: Being Super, in my opinion is a very thoughtful story. Sure, it takes place in high school, but it doesn’t have a lot of the more common themes that we often see like popularity, bullies, and getting bad grades. It deals with how to live through the tragedy of losing a dear friend while you’re still so young. It’s especially difficult when you’re going through so many changes yourself as a person. High school is a hard enough growing experience without tragedy and dealing with being a literal alien from another planet.

Overall, I really enjoyed the graphic novel because it was different. It was easy to feel sympathy towards the characters, even the villains, which I feel makes for more interesting story-telling. It makes you question if these characters are really wrong for what they want and are trying to accomplish. Maybe they’re not, but they are definitely going about it the wrong way. It is still is a little tragic and none of these characters, hero, villain, or otherwise are having an easy time.

I will have to say that my absolute favorite part of Supergirl: Being Super is about the journey that Kara decides to take at the very end of the novel. Her friend Dolly refers her to a news story about a man who just might be a little like Kara so she decides to search for him. I don’t want to spoil it, but I found the last page to be very fun.

I recommend Supergirl: Being Super to anyone who enjoys emotional, smart, and tragic yet hopeful coming-of-age stories. You definitely don’t have to be familiar with the character to enjoy the book and it is a solid introduction to the character. Plus, the art is beautiful and the storytelling is top notch. I thoroughly enjoyed every page.

Previous:“Putting On” Season 2 Review – An Enjoyable Return to On Mekahel’s Life