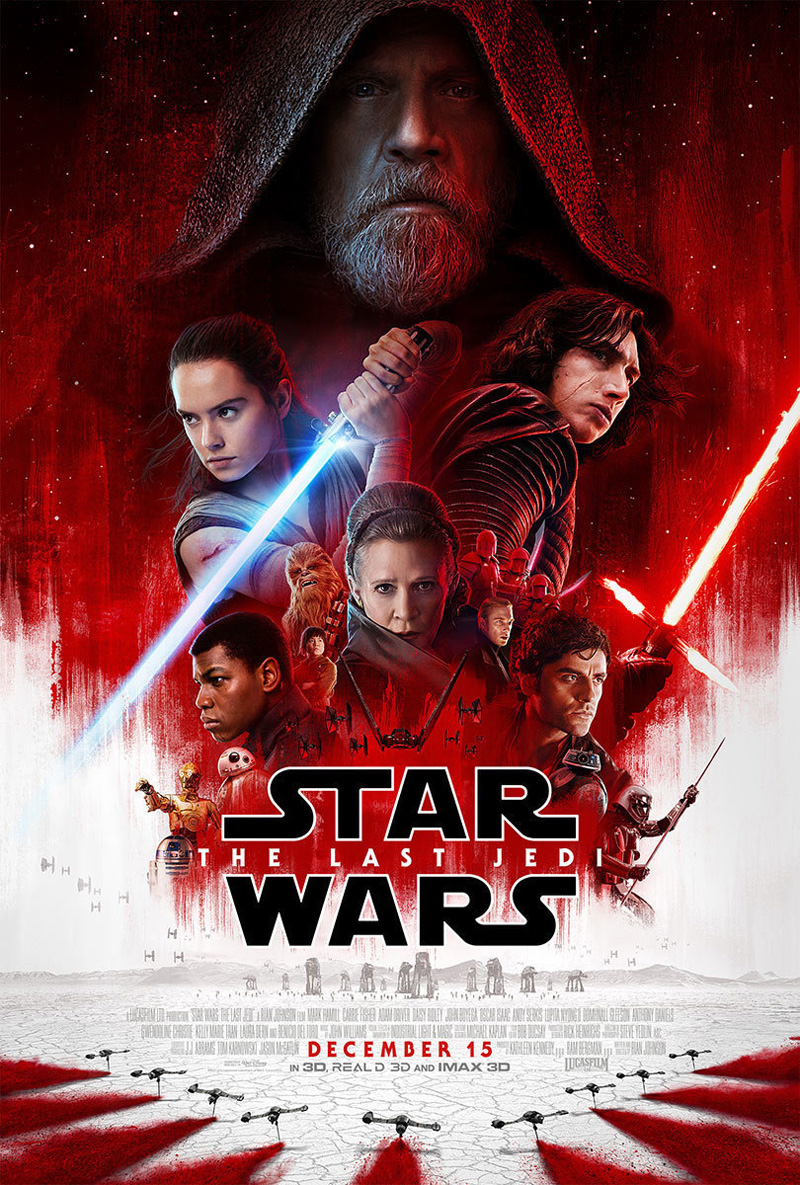 There are fans who loved The Last Jedi and fans who aren’t happy with The Last Jedi. That conflict is pretty standard for every Star Wars movie. What’s different this time is the extent of discussion surrounding how The Last Jedi subverts expectations. Writer and director Rian Johnson did go outside the box a little, and I agree with those who love the movie, but I differ from some fellow The Last Jedi enthusiasts as well as its detractors in that I didn’t find it as stark a challenge to expectations on what makes Star Wars be Star Wars. (WARNING: SPOILERS AHEAD)

The Last Jedi fits with my understanding of what Star Wars is from decades of movies and multiple canon media. The seeds for what Rian Johnson blows wide open have been there all along. The film takes some Star Wars-specific tropes and dizzyingly flips them inside-out, upside-down, hits reverse and then punches forward at top speed, like Poe Dameron’s wild X-Wing run. It reinvents, re-folds like origami, but the building blocks, the paper it folds, the raw materials, have been in canon all long. The Last Jedi even bleeds back, revealing new layers to Luke Skywalker, the nature of the resistance, the force, the Jedi, and the Sith, without inventing new rules for them.

The flavor of Star Wars here is more character driven, more bleak, more sharply aware of its own tropes than other Star Wars movies. The Last Jedi is comparable, in both tone and strength of storytelling, to The Empire Strikes Back, considered by many to be the best and the darkest of the Star Wars films, and goes a few shades bleaker than that. (Interestingly, among those who like the new movie are fans who think it’s a lot like Empire and who think it’s nothing like Empire.) While The Force Awakens was fast-paced, bright, hopeful, and mostly action-driven with some strong emotional moments, The Last Jedi takes more time to linger on the characters’ motives, doubts, failures, and frustrations.

JJ Abrams’ The Force Awakens had to reintroduce Star Wars to a new generation while maintaining elements that make Star Wars feel like Star Wars. With that foundation already accomplished, Rian Johnson’s The Last Jedi can then launch in different, riskier directions. The lead heroes introduced in The Force Awakens, Finn, Rey, and Poe, variations on familiar iconic Star Wars types (the politician/soldier, the Jedi, the charming pilot), are already established, as The Last Jedi introduces a new hero, Rose Tico. The movie doesn’t introduce new world-rule-breaking concepts or the huge revelations some expected. The magical rules are still the magical rules, the villains are still a militant fascist regime whose goal is to dominate the entire galaxy, the rebels are still the rebels, the Sith are still Sith-like, the Jedi still Jedi. But there are light and shadows here cast onto the same raw material that bring out different shades, different highlights, different valleys, than we’ve noticed before.

The subversive part arises from what happens within familiar parameters. (Warning: MAJOR SPOILERS AHEAD).

Hux finds himself confounded by how Kylo Ren refuses to behave like a proper Sith who has allied himself with a fascist military regime should behave. Finn and Rose’s plan to find a “master hacker” at Canto Bight doesn’t work until it works only it doesn’t work the way they thought but it works and then goes pear-shaped. Poe wants to be a leader and has the charisma and brains for it but is too attached to his hotshot pilot habits and he’s his own worst enemy in his goals. Rey offers Luke his lightsaber back and then nothing goes the way she planned.

In many ways, all these characters are caught up in trying to recreate the past to save their present problems. Poe is basically a career resistance fighter, and his comfort zone for how to solve the problem of the First Order is a headlong, daredevil, trick-flying X-Wing run and using bombers. Not to mention the layer added if you know Poe’s parents were a resistance fighter pilot and a ground-forces fighter. Rey’s solution for the Snoke and Kylo Ren problem, and to rally a discouraged resistance, is to recreate the past by bringing back Luke, and to try and recreate what Luke accomplished with Anakin by appealing to Kylo Ren. As with Finn and Rose’s Canto Bight plan, Rey’s plan to confront Kylo herself sort of works except for how it goes completely pear-shaped. Finn, the former stormtrooper who learned to think for himself and defected to the resistance, decides infiltrating the First Order is the best plan ever, and also tries to sacrifice himself which, again, doesn’t go how he planned.

There’s a moment with Chewbacca that seems small but embodies this theme of characters trying to follow their own expectations and past habits, and realizing that’s not going to work this time, where his intention to roast and eat a Porg gets overturned by his own big heart. The side-eye the nuns of Acht-To keep giving Rey as her very presence keeps accidentally disrupting the carefully preserved island, seems possibly a sly self-referential comment from the director. The subversiveness of The Last Jedi is internal, rather than pulling in wildly new elements.

Of our lead heroes, Leia seems the most clear-headed, but she’s weighed down by recent and old losses. It’s notable that Leia saves herself by using the force, when she rejected becoming a full-fledged Jedi. Yet that power is a part of her, she is Vader’s daughter, and she is powerful even if she only uses that power sparingly. By contrast, Luke is trying to reject and escape his Jedi past and the force itself. Of all the lead characters, Luke’s arc for me is the most poignant and the most sharply about looking past self-imposed expectations and putting aside adherence to the past to redefine the familiar. Luke, who already underwent a complete Campbellian hero’s journey cycle, takes the “refusal of the call” step to new levels before moving forward again, having to rework the hero’s journey he already did once. 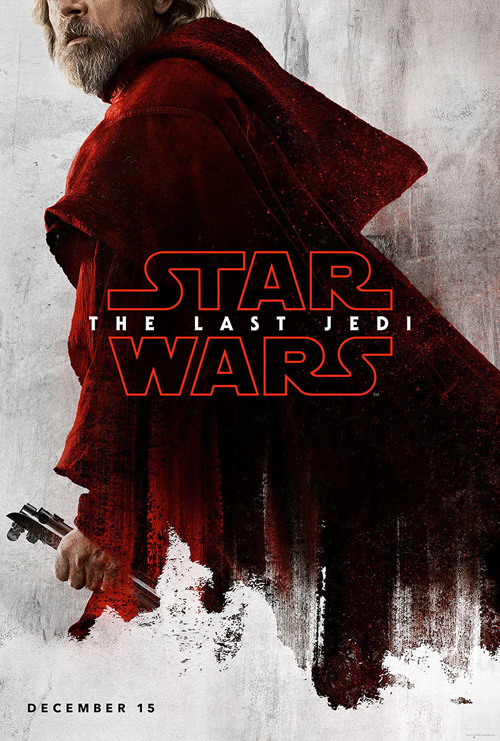 In Luke’s arc especially, having watched the TV series Clone Wars added a layer. It’s not necessary to have seen Clone Wars to understand Luke in this movie, but it’s one reason I didn’t find the direction things went all that surprising. In Clone Wars, the flaws of the Jedi order, further exploration of the nature of the force, the story that plays out with Anakin Skywalker and his padawan Ahsoka Tano, pave the way for some of the places The Last Jedi ventures. The shape of both Luke’s and Rey’s force arcs in The Last Jedi tap into elements that have been part of Star Wars canon for years. They’re hinted at and touched upon in the movies, explored more fully in Clone Wars, but they’ve always been there in what is considered officially “canon” by Lucasfilm.

The Last Jedi teases our expectations, matching them in some spots, going with variations or veering off in others, but nothing to me feels jarring or out of place. The Last Jedi is bleak yet hopeful, grim yet funny, strange yet familiar. The best strength of The Last Jedi is that it’s a deep dive down a route we haven’t taken before into the themes and emotions that make Star Wars be Star Wars.