The X-Files 11×04 Review: The Lost Art of Forehead Sweat 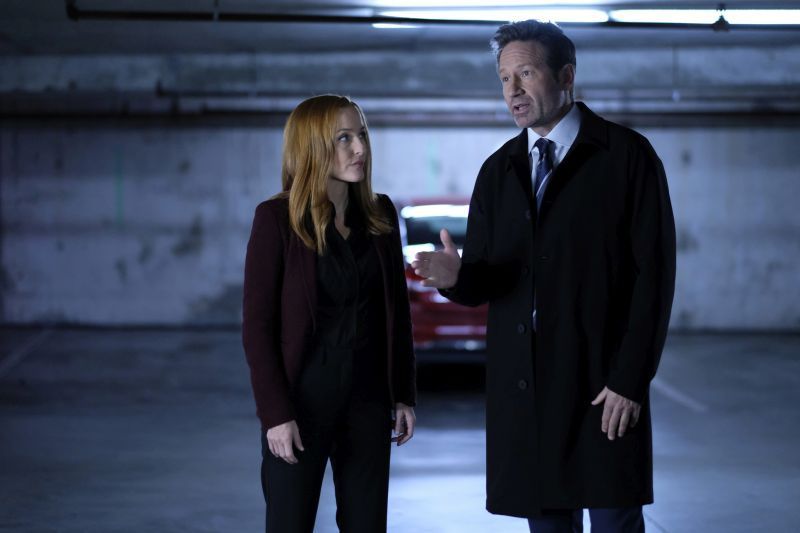 This week’s rollicking good time of an episode, “The Lost Art of Forehead Sweat”, was another one in the vein of “Jose Chung’s from Outer Space” and season 10’s “Mulder and Scully Meet the Were-Monster”…but as silly as it was, it also made some really good (if harsh) points about the current state of society.

So far this season has outpaced season 10 in almost every way, and while I’m still processing “The Lost Art of Forehead Sweat” (and trying to decide if it was in fact better than “Were-Monster”), it’s good to know that we’re four episodes in and the show is still going strong. Why? Well, it seems that the writers are doing a better job this season of embracing the fact that conspiracy theories are passé, and they really drive that point home in this episode. And I mean they really, *really* drive that point home. 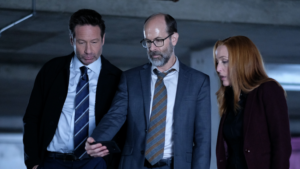 My one complaint is that several times there were scene cuts that made little to no sense. I’m guessing it was on purpose, but it was still jarring, so much so that I believe it was over the top enough as to be unnecessary. In fact, it was via the first of these weird scene cuts/jumps that we met Reggie Somebody, whose sweaty forehead gave the episode its title. Reggie himself was jarring as well, at least at first…but he definitely grew on me enough that what happened to him at the end of the episode was actually kind of sad.

But I’m getting ahead of myself. 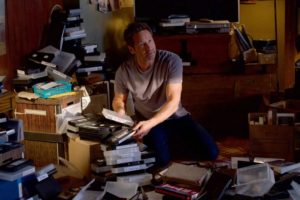 “The Lost Art of Forehead Sweat” was full of examples of the Mandela effect – or should I say Mengele effect? Regardless, there was Mulder’s favorite Twilight Zone episode (which turned out to be an episode of a knockoff show), Scully’s weird version of Jell-o (Goop-o might be the most unappetizing name I’ve ever heard), the Dr. Wussle books (though it was actually spelled Wuzzle), and Ozzie’s Razor (instead of Occam’s Razor, of course). Some of these examples were certainly better than others, and even though I’m pretty sure the only real one mentioned was that of Shazam, I enjoyed every last one of them…and it truly seemed like the actors were enjoying them as well. In fact, they seemed to be enjoying everything about the episode, and I think that’s one of the reasons it was so enjoyable in turn. 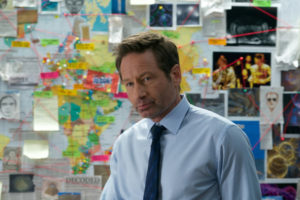 Unfortunately all of these different ‘memories’ led to one of those regular old Mulder/Scully disagreements. This time Mulder was insisting that Reggie was wrong, there was no one out there editing/changing people’s memories – it was parallel universes! Scully of course didn’t think either of them was right and insisted that people were just misremembering things…but that didn’t stop Mulder from putting together a Charlie Day-style bulletin board as he tried to prove his parallel universe argument. In the end, though, his conclusion was “I’ve lost the plot. I can’t find the hidden connections between things anymore. The world has become too crazy for even my conspiratorial powers”…and this was just one of many quotable quotes in “The Lost Art of Forehead Sweat”. 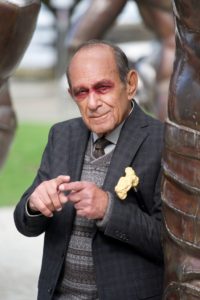 We were also introduced to Dr. They, a man who supposedly came up with the memory manipulation that Reggie was blaming for, well, everything, and I’m not sure what was more hilarious – the conspiracy theory video about Dr. They, or Mulder’s meeting with him. The two had a long conversation, but it was so full of quips and pithy observations that I honestly didn’t want it to end; my favorites were probably “phony fake news” (a presentation of real facts but in a way that ensures no one will ever believe any of it) and Dr. They admitting that he can’t really control people’s minds but that it doesn’t matter, because all you need is for some people to think it’s possible and you’ve sown the seeds of uncertainty.

Of course their conversation *did* have to end, but thankfully Dr. They’s final tidbit really fit the bill. He told Mulder that the current president once said something profound: “Nobody knows for sure.” Mulder asked what he was referring to, and Dr. They simply replied, “It doesn’t matter.”

Now, as fun as it was to have Reggie claim he’d started the X-Files and had been Mulder and Scully’s partner – especially as it meant a slightly more cheery version of the theme followed by Reggie being inserted into several old X-Files clips – I have to admit that I assumed this didn’t matter…but perhaps it sort of did. As I mentioned earlier, Reggie’s fate was actually kind of sad. It turned out he was a patient from a mental hospital, and he was hauled away (albeit under some very strange circumstances – a very old car, a straight jacket, and an orderly with a NET?!)…but then Skinner showed up and asked where they were taking Reggie. Of course I doubt we’ll ever see Reggie again, and surely that’s for the best, but I also can’t say that I’d be distressed if he popped back up in some future episode.

Before I conclude this already wordy review, I have to give a shout out to Reggie’s story about what happened in the last case he worked with Mulder and Scully…because apparently they met an alien who told them that aliens had been studying humans for years but were done doing so…and they would no longer tolerate us trying to venture beyond our realm. In fact, the alien announced that they were building a wall (a beautiful, albeit invisible, one)…because we humans were bringing drugs and crime to them. And while some of us are surely good people, the aliens didn’t have a choice, because while other galaxies have their fair share of problems, they don’t want to be infected with our one unique trait: we lie. The alien did at least give Mulder a book containing All the Answers they could have possibly searched for, but unfortunately having all of the answers meant the end of the X-Files.

That was Reggie’s story, and he, at least, is sticking to it.

Did you enjoy “The Lost Art of Forehead Sweat” as much as I did? Share your thoughts on the episode in the comments!

Previous:Batman: The Telltale Series “The Enemy Within” Episode 4 “What Ails You” Review