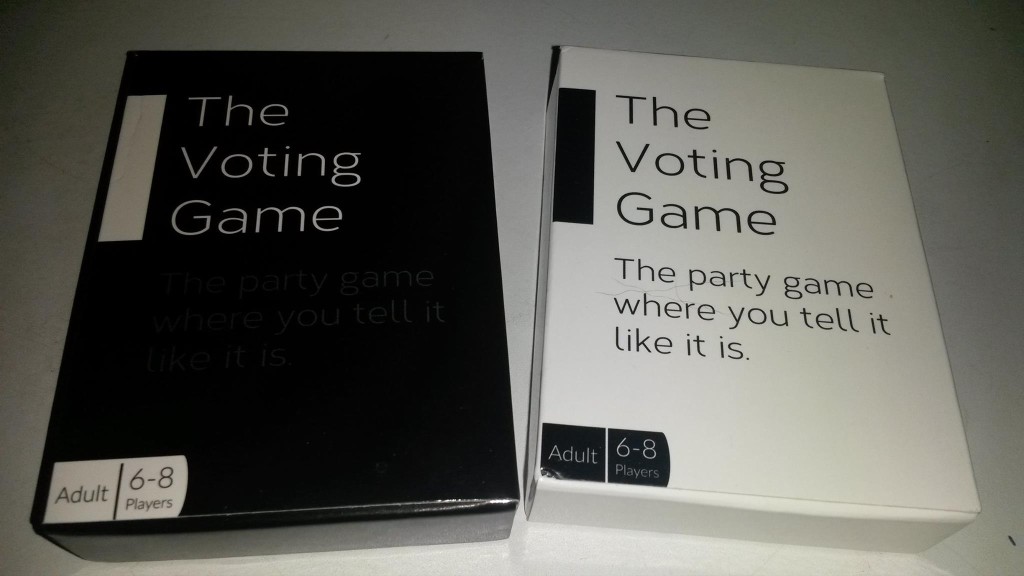 The Voting Game is another card game similar to Cards Against Humanity.  The biggest difference between the two being that the cards are more about the players and what the other players think of them.  Something more like Apples to Apples, but definitely an adult game; probably not something you want to play with your parents.

The Voting Game is compiled of two decks.  One contains cards with the numbers 1-8 to be given to each player. (The suggestion is 6-8 players as this is a party game. However we made it work with myself, my brother and his wife.)  The other deck contains random questions from the very funny to the downright obscene. Some examples, “Who would run back into a burning building to save their pet?” Everyone guessed me. “Who will get into a fight with an elderly person and lose?” Everyone guessed my brother. “Who still has a curfew when they stay at their parents’ place?” Yeah, that was one of us, too.  It would be easy enough to remove the more risqué cards depending on who you’re playing with. 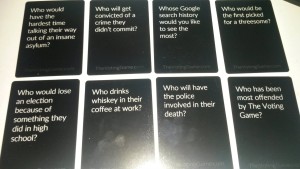 When a card is drawn, each player votes for who the card best describes.  There’s a number of different play variations or there’s the option to go through the full deck.  We played the “selfie” version since we had limited players, and it allows you to vote for yourself. Whichever player gets at least half of the votes, whomever voted for them gets a point.  There’s also the option to play with original questions only, or make it into a drinking game.

The description of the game on Amazon says, “Not recommended for accountants and other people without a personality.” Which is probably accurate. It’s definitely a party game geared toward people who don’t mind others guessing possible embarrassing things about them or having a laugh at their own expense.  We certainly enjoyed playing it and learned a little bit more about each other and our individual sense of humor. The card, “Who is secretly from the future?” We all voted for ourselves.  The Voting Game can be purchased on Amazon here.