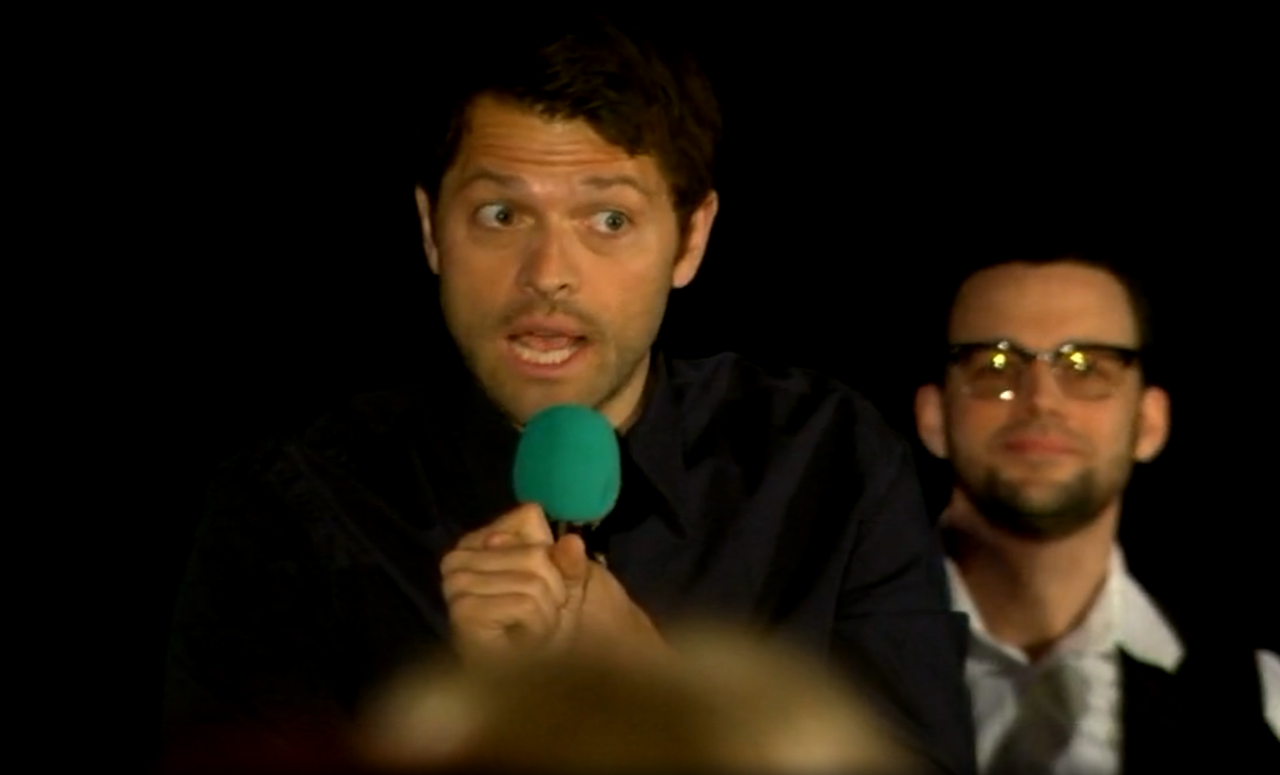 I was fortunate enough to be able to participate in the live streaming event from Salute to Supernatural: Washington DC and get a glimpse at a new series of hilarious shorts by Supernatural‘s Misha Collins.  The series is co-written by Misha and his spouse, Vicki Vantoch, and friend Colin Ferguson, and Misha stars in both the pieces shown at the event.  The first short also stars Danneel Ackles, wife of Supernatural co-star Jensen Ackles, so it’s definitely a friends and family run production.  The show was supposed to start at 12:10pm EST, but Misha’s Minions did what they do best and crashed the StageIt website for the better part of an hour.  Those who were in the audience at the convention were entertained by Rob Benedict’s band while those of us online exchanged lighthearted laughs at the unintentional destruction of yet another website (it’s becoming a pattern with us, I swear).  Eventually the server problem was fixed and the show began. 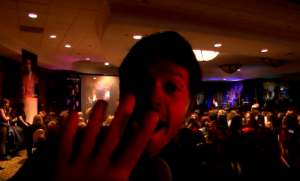 The event was partially a charity fundraiser for Misha’s organization Random Acts.  Viewers could “tip” through the website and the highest tippers were rewarded with some pretty awesome prizes.   While the production did cost money to film, additional profits go to Random Acts and portions of the DVDs sales will go to his charity as well. If you missed out you can buy it over here.  There are also three unique shorts and only two were shown during the screening so you might as well buy it to get access to the other short anyway.  Besides, charity, you know?  Just do it.  It’ll be worth your time and money.

Before, between, and after the shorts Misha took fan questions from the Internet and we got a bit of that wonderful Misha Collins charm that’s fostered such a devoted fanbase.  He’s a very sweet man and has a good heart, even if his sense of humor may be a bit too bizarre for many people.  Through the Q&A we learned a bit about the production, including the fact that most of the good ideas were Vicki’s and Misha kind of lets her do her thing.  Their collaboration shouldn’t be downplayed, though, because their offbeat personalities mesh together very well and create these wonderful off the wall little stories.  I’m a very big fan of Vicki and her contributions to Misha’s fandom, even if she often stays out of the limelight.  She’s a pretty awesome person and I love hearing stories about her from Misha.  These little glimpses into their lives and their creative collaborations are often my favorite parts of his panels. 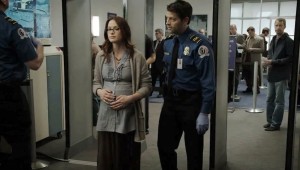 The first short was the one that was most heavily advertised due to Danneel’s involvment in the production.  She plays a pregnant woman who opts for a manual pat down to avoid walking through the metal detectors.  The situation escalates in bizarre ways that are entirely Misha and Vicki’s brand of weirdness.  While the story is definitely over the top with how intimate these pat downs get, a large part of the comedy comes from the fact that they often feel uncomfortably intimate.  So yes, pregnant women don’t get probed in airports (yet?), but the casualness with which these characters accept these odd circumstances has a surprisingly poignant message about America’s airport security system.  “Poignant” might not be the first word that comes to mind to most people who watch this odd little film, but it’s none-the-less how I feel about the message that’s buried under all the over the top imagery.

The second film caused much more dramatic ripples in fandom.  Many people loved it, but some were upset by it.  In general I fall on the side that enjoyed it, but I definitely recognize the concerns of others regarding this one so I’d be remiss to ignore it.  In this one Misha’s character takes a typically cowboyish Texan into a separate room for a private screening.  Things escalate rather quickly and the whole affair turns into an awkward homoerotic interaction between the two characters.  Misha serves him some alcohol, talks to him about his family, and then very sensually feels him up.  They are moments away from kissing when Misha abruptly declares that he’s cleared the screening and ends the session.  The lights flash back on and the whole scene ends with the Texan thoroughly dejected.  You can tell by the look on that man’s face that he really wanted it to continue, but it was just a TSA screening, after all.  This wasn’t an actual date or anything.

While I generally enjoyed it (hey, I’m a big fan of homoeroticism, whether it’s subtext or extremely blatant), some people felt it was a bit too much of a tease in a fandom where subtle homoerotic tension is already a hot button issue.  Their opinions are certainly valid given the climate of fandom, but I don’t know if I necessarily agree that this was pushing those buttons.  The abrupt end of the scene was part of the humor of the moment and is another reminder of just how uncomfortably intimate these TSA screenings can be.  Sometimes you might feel like you’re rounding second base with your screener.  So, besides the alcohol and the sweet talking, I kind of get what they were trying to convey with that piece.  I think it accomplished the goal it was setting out to achieve.  And let’s be honest, if the screeners looked like Misha, served me booze, and talked me up while they patted me down I’d be equally as dejected when it ends before getting to the next level.  But again, I understand where the critics are coming from.  It’s a touchy subject. 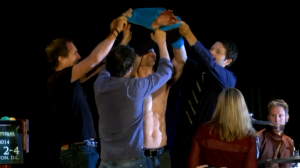 Overall the event was pretty enjoyable.  The shorts were funny, Random Acts raised a lot of money, we got to see Misha be his fun and hilarious self, and we got to see a bit of skin from Matt Cohen as he auctioned the shirt off his back for charity.  The event was brilliant and I was happy to be a part of it.  I hope those of you who ordered the DVDs enjoy the third short and congrats to all the winners who tipped during the live event.  I hope to see many more similar events like this in the future!  With Misha and Vicki collaborating on things, it’s sure to be interesting.

All Images Belong to: tsaamerica-levelorange.tumblr.com