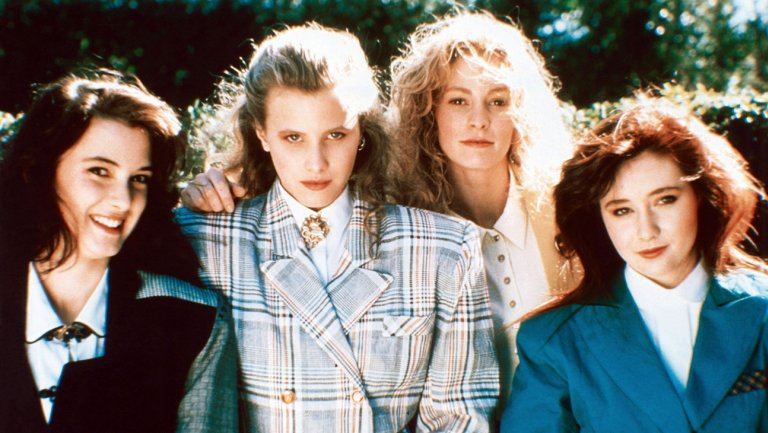 The 1989 cult classic film Heathers is getting a reboot, with TV Land developing the series with a more modern slant.

TV Land, which was originally your go-to destination for classic sitcoms like Three’s Company and Leave It to Beaver, has recently undergone a rebrand in an attempt to court younger-skewing viewers. This isn’t the first reboot TV Land is trying to bring to the small screen – a series based on The First Wives Club is currently in development – nor is this the first time Heathers has been adapted for television. Only time will tell if this venture is more successful than the previous ones, but it’s worth mentioning that several of TV Land’s newest scripted comedies (Younger, Teachers, The Jim Gaffigan Show)  recently got renewed.

According to The Hollywood Reporter, which broke the news yesterday, the Heathers series will take place in modern day and is still, thankfully, being described as a black comedy. I had worried, when I saw that it was TV Land who was developing the show, that it wouldn’t have the same kind of humor that made the film such an iconic piece of 1980s nostalgia. It’s also been described as the network’s first “anthology” series, which suggests it will be similar to American Horror Story or Fargo with a different cast and story each season.

However, the most interesting news about this reboot is the character descriptions. The Heathers are still described as “popular-yet-evil”, but in an effort to bring the story into the 21st century, TV Land is injecting a little bit of diversity into the clique. According to THR, “Heather McNamara (originally played by Lisanne Falk) is a black lesbian; Heather Duke (Shannen Doherty) is a male who identifies as gender-queer whose real name is Heath; and Heather Chandler (Kim Walker) has a body like Martha Dumptruck.”

I am cautiously intrigued by these changes to the characters (all of the Heathers, indeed all of the characters, in the original film were white), poorly worded as their bios may be, because diversity is extremely important. Onscreen representation of marginalized groups (such as people in the LGBTQIA+ community) goes a long way in helping to normalize how people see those groups. I’d like to think that we would eventually get there as a culture on our own, but let’s be realistic; it’s much more likely to happen if the general population can see that people who are different are still people and deserve to see themselves on TV as much as we white, straight, cis folks do.

Of course, it is just as important that the representation be done well. Diversity for diversity’s sake generally doesn’t do anyone any favors (says the straight white girl), and a show like Heathers, which would most likely rely largely on satire, may run the risk of turning the characters into jokes or stereotypes. Or even worse, falling into tired tropes like The 100 recently did. Because currently, all characters are not created equal, and treating minority characters like every other character will only work once minority characters aren’t a minority.

The problem lies in the spirit of Heathers. In the film, Veronica (Winona Ryder) and J.D. (Christian Bale) went around murdering their classmates, and making these characters diverse only to end up killing them off seems to miss the point of representation entirely – or the point of Heathers. After all, the Heathers were the “bad guys” – the status quo, the over-represented majority. They were spoiled, rich, and beautiful. They bullied the marginalized and disenfranchised, and it seems like a really bad idea to do a reversal like they obviously intend to do for this series. To make the social outcasts the “evil” clique only plays into people’s paranoia that “SJWs” are ruining the country with their “PC” culture.

It could be interesting if done well, but do you trust TV Land to do this well? Because I’m not sure if I do.

What do you guys think about this news? Would you tune in to Heathers on TV Land?