Uncanny X-Men #14 Review: A new Gay Mutant in the Team! 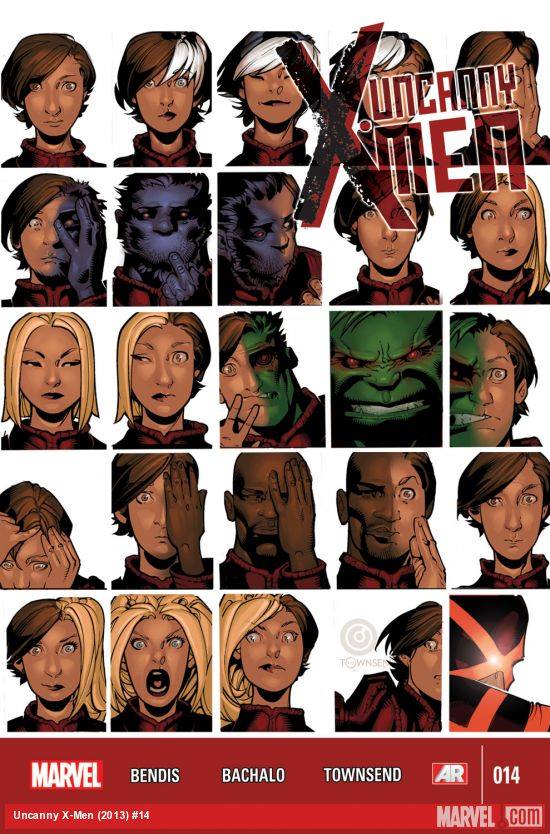 It looks like a new gay mutant has joined the X-Men. Marvel NOW! introduced Benjamin Deeds way back when Cyclops was recruiting for his team. However, in issue 14 the young mutant came out. He has the power to shape-shift and, according to Emma Frost, he can be one of the best assets of the team. So, will Benjamin get a fair amount of panel time or is he just Marvel’s way to introduce a gay character in Cyclops’s team and then push him into the background?

Truth be told, I’m not sure about the answer. Issue 14 came out this week and it was all about the new mutant. We see him trying to keep up with his fellow mutants during training. Cyclops even tells him that he isn’t fit to become an X-Man because his powers are passive. I wasn’t expecting Emma to be the one to see his potential. The whole scene between the White Queen and Benjamin was funny, albeit a bit uncomfortable. I mean, dropping your towel when you are surprised to see a teacher in your room is pretty weird. Emma doesn’t even avert her eyes. She calmly tells Benjamin that he dropped his towel and proceeds to tell him about his powers while he backs up against the wall trying to cover himself.

According to Emma, Benjamin can turn into the person he’s in close proximity with. Not only that, he releases pheromones that allows him to calm the other person and make them trust him. These pheromones also disrupt technology around him. The rest of the panels show Emma, Magik, and Benjamin travelling around the world practicing the young mutant’s powers in the field. This is also where he comes out. The scene is quite quick and has an impact. Emma tells him to seduce a girl at a bar and he tells his teacher that he’s gay. “I don’t care. What does that have to do with this?” is Emma’s answer, and it’s perfect! She wants him to do as he’s told. His sexuality doesn’t mean that it has to define how he’s supposed to use his powers. In the end Benjamin is able to make his way into a S.H.I.E.L.D compound, deliver a letter warning about Sentinels, and be accepted into the team by Cyclops. Judging by his espionage skills, I have a feeling Cyclops is going to be using him for a lot of covert missions. 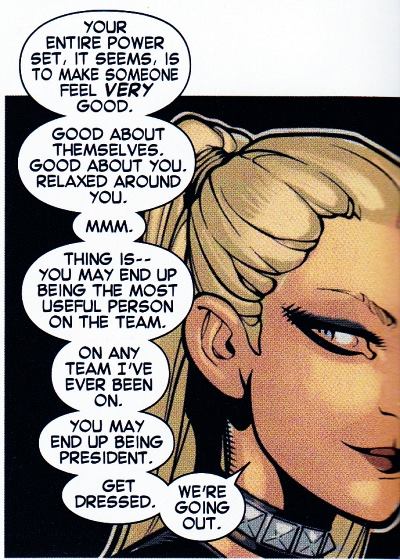 This is not the first time Marvel has introduced a gay character. Northstar married his partner not so long ago, Anole and Bling are at Wolverine’s school, Mystique is out and proud, Hulkling and Wiccan are the soul of Young Avengers, Prodigy recently came out as bisexual, and Loki’s sexuality has been confirmed as well. However, some of these characters haven’t been in the spotlight for a long time. It’s been ages since I’ve seen Anole play a part in missions. Deep down I have a feeling that Benjamin Deeds, currently known as Morph, might face the same fate. He will probably get some panel time in the coming issues, but down the road he will be pushed into the background. Uncanny X-Men is essentially a Cyclops title. I just hope that Marvel has some good story arcs for him that show he wasn’t created to give Cyclops’s team a young gay character, just because Wolverine has Anole and Bling at his school. Whatever the case, while the Marvel Cinematic Universe is shying away from the topic, it’s good to see that the comic universe is very inclusive regarding different sexual orientations.

What did you think of the new issue? Do you think Benjamin will play a greater role in the comics? Please share your thoughts in the comments.

Previous:American Horror Story: Coven 3×07 Review: The Dead
Next: Big Bang Press and Why You Should be Excited