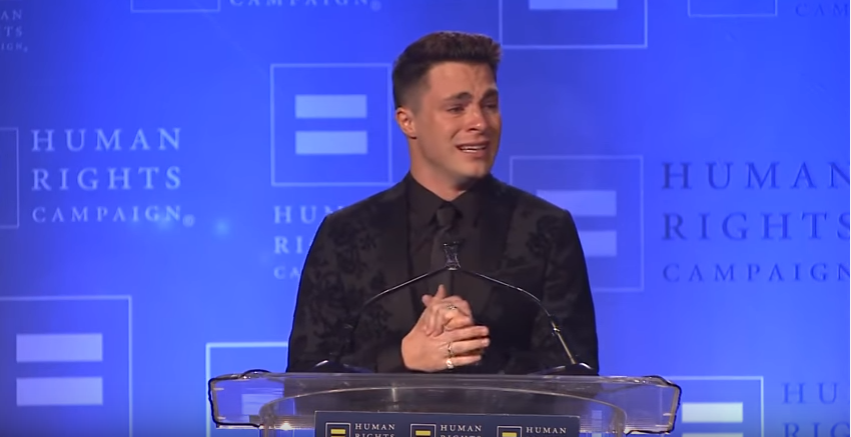 Colton Haynes’ acceptance speech for the Visibility Award by the Human Rights Campaign was blocked by Viacom. And of course the actor and a whole lot of people aren’t happy about it.

We previously reported HRC honoring Colton Haynes with a Visibility Award at the 17th Annual HRC Seattle Gala on the 27th of August, 2016.

“Colton Haynes has inspired countless LGBTQ young people across the country and around the world to live their lives as their authentic selves,” said HRC President Chad Griffin. “By simply being open about who he is, Haynes is helping to break down barriers and tear down closet doors. We are pleased he will be joining us at the 17th Annual HRC Seattle Gala, and we are proud to honor him with the HRC Visibility Award.”

The video of Colton’s tearful acceptance speech was eventually released by HRC to help and inspire numerous people. The speech was quite moving. I wanted to go up on stage and give Colton a big hug. I just can’t handle people crying. It was clearly a very big moment for the young actor. He talked about never making the decision of being gay but it being natural as the color of his eyes. It was an overall very inspiring speech.

While the video gained thousands of views a few days later it got blocked!

Thk u @viacom for showing your support by BLOCKING my @HRC speech video. Here is the new link… https://t.co/1wTgLwGRvY . #TrueColors

I mean I get that there are copyright issues and stuff in the business world but the original video wasn’t about Teen Wolf, or any other show for that matter. It was about Colton Haynes and him being able to be his real self. It had only a few minutes of content (consisting of different scenes) from the MTV show. Just a few minutes! 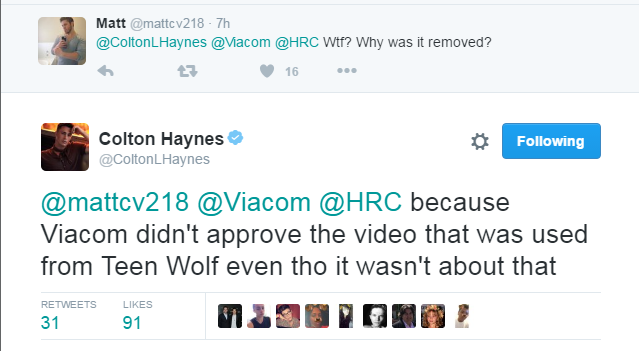 Also, the journalist in me feels connected to this tweet. Colton needs to write a ‘Tell All’ book at some point in his life.

Colton has some SCALDING tea stashed away somewhere. The right moment just needs to present itself. We're waiting. pic.twitter.com/IsSSs9tjzW

Jokes aside, I didn’t like Viacom’s decision regardless of copyright claims and whatnot.

What do you think? Did you watch Colton Hayne’s acceptance speech? Let us know!