Travis Fimmel is a fabulous actor, and his monologue at the beginning of “Yol” is no exception to the immense talent he portrays as Ragnar Lothbrook. Delivering it in a bathtub didn’t hurt, either. 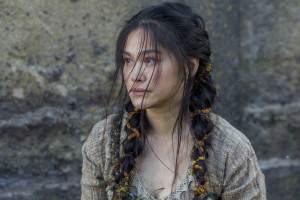 This scene also finally introduced us properly to Yidu, played by Dianne Doan. Hooray for an actor of color getting a prominent, interesting part on this show! I thought the dialogue between the two stood on its own before Ragnar mused out loud the similarities between them as a slave and a king, but there are worse things than heavy handedness when it comes to script decisions in “Yol”. Like Yidu’s apothecary skills being called “ancient Chinese medicine.” I mean, I appreciate they pinned down exactly where she was from rather than leaving her ambiguously East Asian, but there was no way to do that without using a racist cliche? I wonder if Yidu is a member of the Tang Dynasty, and if her brothers will come back for her. I can’t, unfortunately, see her as more than a filler character this season to mend Ragnar’s frayed and suicidal mental state. 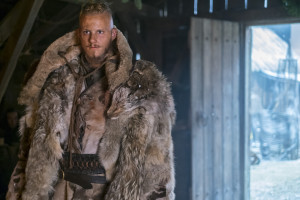 Did you know that Bjorn is a Man Now(™)? You can tell because he no longer Shows Emotions or Cares About Things, and also because he stomps very deliberately and wears furs that make him look even bigger than Alexander Ludwig’s 6’2”. I am glad Bjorn got out of the wilderness in “Yol,” and I guess I’m glad he’s getting another shot at a love interest, even though he was going to let Torvi stay behind if she wasn’t willing to abandon her child. You’d think a child of viking divorce would appreciate a mother wanting to stay with her son… Or that Bjorn would remember he has a daughter and display some empathy. I’m still hoping Pórunn comes back, but I have a feeling she’s good and fridged. Offscreen, too. She deserved better. 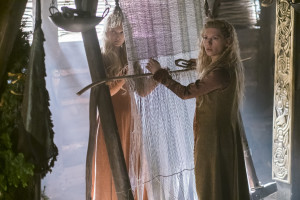 The fight scene with the Berserker was a cool way to fill the gore quota. The fishhook flail to the face was clever and gruesomely entertaining, even if it was a highly ineffective torture tactic. I am a bit miffed Lagertha didn’t get to face off against the assassin herself–give her something to do, dangit! (Besides Kalf.) Oh, and because Bjorn is a Man Now, he had to rip out the Berserker’s intestines, because unnecessary displays of violent masculine dominance is what being a man is all about. I guess when Ragnar is your main male role model, this is what happens.

Aslaug continues to scheme, now bringing Ivar to Floki to teach him the “deep and ancient ways.” I’ll admit, the idea of chip on his shoulder, full-grown Ivar bristling with righteous heathen rage is very exciting to me. If we get to see him grow up as we did Bjorn, I look forward to seeing how the writers follow the legend (Ivar the Boneless) he was based on. The one thing about this 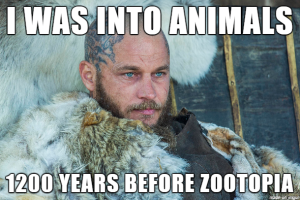 storyline is that it feels partially unearned–“I love him as much as you,” Ragnar says despondently to Aslaug. “Sources?” I say aloud to my television screen. Still, between Floki’s seer trip and a new, face-tatted suitor for Aslaug, there is a lot of tension and angst in the Kattegat royal family.

Said angst was deliciously and deliberately juxtaposed to Rollo and Gisla’s newfound nuptial bliss. Again, I’m sort of scratching my head at the missing pieces here–didn’t we last see Rollo beating his French tutor because he couldn’t grasp the language? But now he’s fluent apparently? Didn’t Gisla hate him openly in “Mercy?” But now in “Yol” she’s ready to insult an important holy man because she wants Rollo’s sweet sweet bearded love?–but eh, I can fill in the blanks. Especially when it involves raucous yuletide lovemaking. No matter the episode, I can usually count on Rollo for laughs.

What did you think of “Yol?” Let us know in the comments.