Introducing the VRV app, a new video streaming app that links thirteen channels – including Crunchyroll and Funimation – in one place!

VRV was born with the intent to bring anime fans more content. With that in mind, not only will you get anime mainstays Crunchyroll and Funimation, but also channels like Nerdist, Geek & Sundry, and Rooster Teeth that talk about gaming, science, books, and more.

These are the thirteen channels that you can find on VRV:

Many of the channels on VRV offer a huge selection of shows that are free with ads, or you can purchase a premium membership. A premium membership will allow you to watch without interruption as well as give you the content first and even offer exclusive content. There is a special combo deal of $9.99 a month for 8 channels, which considering I pay $6.95 for Crunchyroll seems like a pretty great deal!

Speaking of, if you have a premium membership to Crunchyroll or one of the other channels, you will be able to link your accounts, but that feature currently isn’t available. 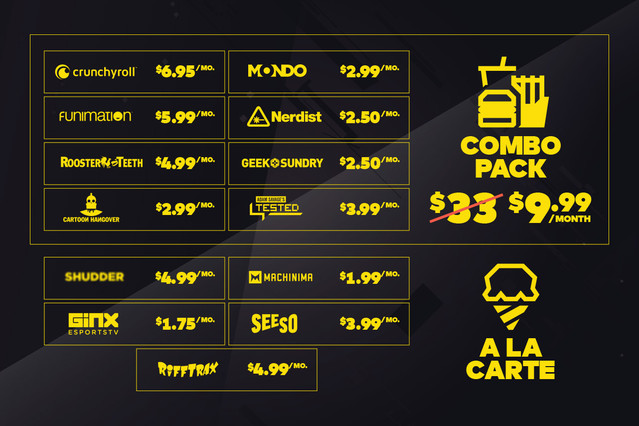 There will also be content that is exclusive to VRV. Cartoon Hangover and MONDO are two channels that are only on VRV, so any new series and upcoming seasons will be exclusive to their channels.

The VRV app is now available on PlayStation 4, Xbox One, iOS phones, and Android phones, with plans to roll out to more devices – and the web – in the future. Also, VRV is only available in the US at this time.

For more information, here is the VRV premium FAQ.