If a man’s world wouldn’t be nothing without a woman or a girl, then shouldn’t it also be a woman’s world? Long relegated to the role of “support”, women have been running things behind the scenes since the beginning of time. Bolstered by the movement to see more diversity and fairness in Hollywood, more women are stepping up, making their voices heard and creative waves in the industry. In the SDCC@Home 2020 Panel: “Women Rocking Hollywood 2020: Supporting Female-Helmed Film and TV”, 5 female industry leaders shared their experiences as females getting it done.

The panel was moderated by Leslie Combemale, who is the creator of Women Rocking Hollywood, which is a site dedicated to a female perspective during Comic-Con and also a popular panel during the show. On the website Leslie says, “So many powerful, talented women are at the forefront of changing Hollywood from the inside. As creatives, directors, and producers, they are breaking box office records and showing Hollywood that altering the status-quo makes for better movies.”

This year’s participants know exactly how to rock the status quo!

“I wanted two women who were really ambitious and dedicated to their careers and not apologetic about it.” -Nisha Ganatra

Leslie opened the “Women Rocking Hollywood” panel with Nisha Ganatra and a clip from her latest feature High Note. The movie stars Dakota Johnson and Tracie Ellis Ross. Nisha found great creativity in establishing the reality for these characters. She noted that the women didn’t have to be bumbly and chaotic in one area of their lives to make up for how together they were in another area. The two female leads (one of whom is a woman of color) weren’t pitted against each other. The only villain in the film was the industry itself with its ageism and sexism. 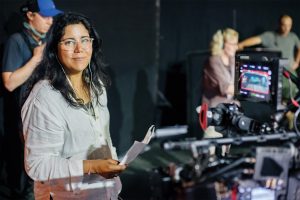 In pointing out the themes of invisibility that women normally face, Nisha spoke about the collaborative process and gaining diverse points of view by placing women in production, design, casting, and even sound mixing. The team made sure to get the best person and not the person who may have just historically filled the role.

Nisha also noticed that many women were being held back by the adage of ,“You can’t do the job until you’ve done the job”. She saw gaffers who had never been PAs and electricians who had never been gaffers. In a risky move, she essentially bumped those with lots of experience up to a new heading which they could then put on their resume when hunting for the next position. Nisha wants to perpetuate work for more women and is excited about the opportunity to push women into places we traditionally were denied access to.

“I’ve learned to have the utmost respect for all collaborators and having a very inclusive set where we give [women] chances they might not otherwise have.” – Lauren Wolkstein

Lauren Wolkstein directed an episode of Queen Sugar for their 3rd season and now acts as producing director for season 4. When asked about the parameters of a producing director, Lauren explained that the job entails making sure the writer’s vision is protected and makes it on the screen. She helps ensure cohesiveness and acclimates any guest directors to the show while mentoring them through the process. 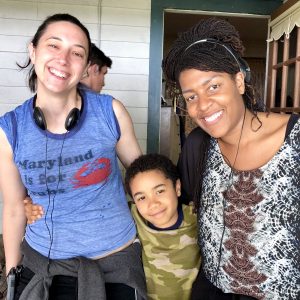 The pandemic shut production down about halfway into the 2nd episode, and Leslie asked Lauren what lessons she learned from the delay. Lauren is a new mother and talked about how she further learned how to shift responsibility and juggle many things at once. Leslie then asked what childcare was like, bringing light to a very important topic when speaking about women and mothers on sets.

Lauren praised the cast and crew, saying they’ve been extremely supportive of Lauren’s family after they relocated to New Orleans for the show.

Lauren credits her current career to Ava DuVernay. The creator and executive producer of Queen Sugar makes a habit of only hiring directors who have never directed TV before. Ava opened up the door to episodic directing for Lauren and she hopes to pay the opportunity she received forward to other female novices in the industry.

“Women are bad ass and courageous and don’t have to have a traumatic experience to fuel this charge in us. We just are.” – Gina Prince Bythewood

Gina Prince Bythewood has never seen action as a boys club. She kickboxed for a few years and always had a love for thrilling action sequences, so when it came time to direct The Old Guard, Gina was ready. Leslie praised the visually intricate fight scenes and Gina spoke about how lucky she felt working on the project. From casting to set pieces, Gina worked hand in hand with Greg Rucka in bringing the world to screen, not just visually, but representationally as well.

At times the characters would fight with archaic weapons and they had to make sure that fit in with the reality they were trying to build. Gina wanted the characters to be the kind you might see in a Starbucks, only these people were thousands of years old. “The characters are immortal, but I wanted it to have a grounded feel to it. And that infected every aspect of the movie.” 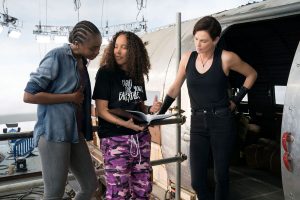 Gina also loves that they have two female leads, one of whom was black. “That never happened in a comic film until Black Panther.” Leslie mentioned that Gina had a knack for picking stars, and Gina told a story about how she’d seen an advance copy of Barry Jenkins’s If Beale Street Could Talk, which stars Kiki Layne. She thought she was a phenomenal actress, but ultimately too soft to portray Nile’s edge. Five minutes into the audition Gina realized how wrong she was. “Kiki has an innate vulnerability that makes you care about her, but also natural toughness.”

When explaining what she looks for in an actress, Gina said, “Not just the chops, but the desire to be great!”

“It’s a coming of age story of a young woman and her powers and what it means to own them and to grow.” – Zetna Fuentes 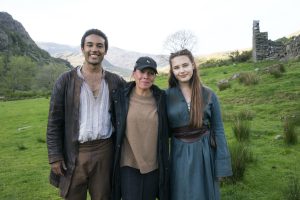 I had the pleasure of interviewing Zetna for Cursed and I was delighted to hear more about her initial meeting with Frank Miller to discuss directing the series. It was a surprise that he was a part of the initial meeting and even though she was nervous, she said the room was the warmest, most lovely environment. Later during the meeting with Netflix, she credits Frank as one of her biggest cheerleaders, praising the visuals and helping to grow the excitement for the production.

Directing a pilot was a goal for Zetna for a lot of years and she was excited to have something to build from the ground up. From color pallets to lens choices, there were so many decisions that needed to be made. She depended on her eye even in small things like color; “If the Paladin robes are red, what kind of red and how does it make you feel?” She wanted everything to be representative and relatable and incite excitement in an audience who maybe never saw themselves within the fantasy space.

“We want to tell good stories.” And Zetna believes in order to do that they should be representative of the world as a whole.

“We can’t go back to business as usual. We must make sure there’s equity and diversity baked into the content we put out.” – Alison Emilio

Alison Emilio is the director of ReFrame. Their overall mission is to measure progress towards a more gender-representative industry on all levels. Of the women on the “Women Rocking Hollywood” panel, Zetna is a ReFrame Rise fellow and Nisha is a ReFrame Rise ambassador and just about all the women have received the ReFrame stamp. 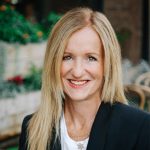 Alison has worked tirelessly to establish the ReFrame stamp, saying it has the potential to be akin to an organic seal or the gold standard on what it means to create content that is fair and equitable as well as representative of the world they want to see. They have ongoing partnerships with heavy hitters such as Hulu, IMDBPro, Delta airlines – and the list is growing.

“When the money comes in, women fall out,” Alison explained when discussing why the need to amplify female entertainment professionals exists. ReFrame helps to elevate women back into the conversation. She says it’s important to like and follow those who are doing it right and to let them know their efforts are noticed and working. Integrating women into the industry should be an instinctual process and ReFrame is making sure to advocate for the next generation of female industry leaders.

Overall the “Women Rocking Hollywood” panel was as insightful as it was inspiring. Please check out the full panel and please support all of the participants on social media. (It wasn’t noted in the video, but Zetna’s Instagram is @zetnafuentes)