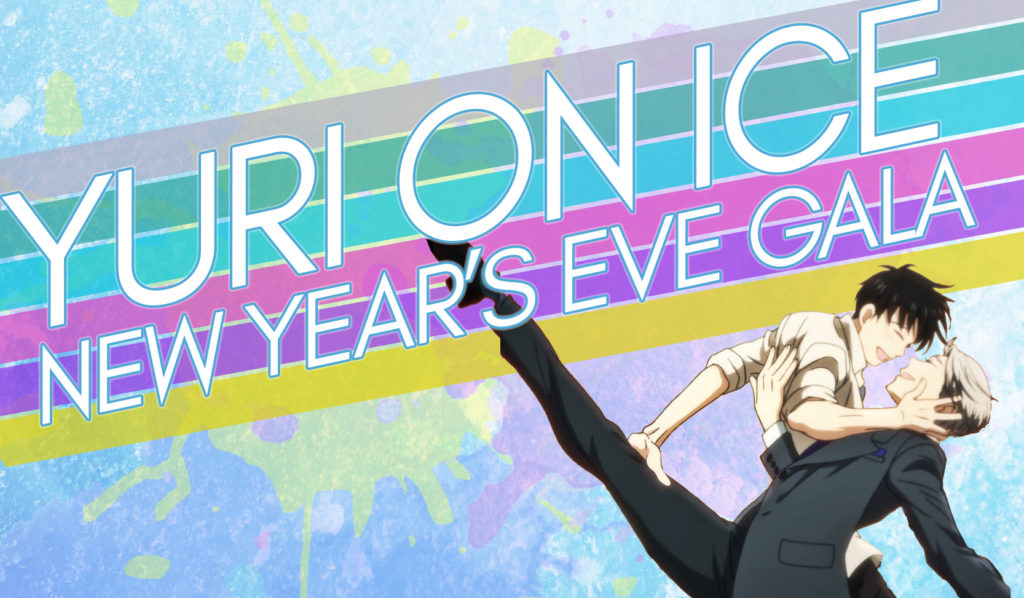 Yuri on Ice may have concluded on December 21st, but we here at the Geekiary aren’t quite done celebrating it.  Please join us for the Yuri On Ice New Year’s Eve Gala!

The Yuri On Ice New Year’s Eve Gala is a global event scheduled to take place over the New Year’s weekend. No matter where in the world you live, you can join in!  Bring in 2017 with your fellow fans and let’s celebrate the best anime of 2016 (best anime ever??) around the world together!

When does it start?

The rewatch will start:

We will start every half an hour to allow time for people watching without a Crunchyroll subscription to catch up with their ads as well as give people time to take breaks from their computers without missing any of this amazing show.

We understand these times won’t work for everyone, so feel free to hop in and out as you please!  And don’t forget to use the hashtag #YuriRewatch to join in the fun!

How do we watch?

Yuri on Ice is available on Crunchyroll with English subtitles, with most episodes dubbed on Funimation for subscribers.  While it’s also available on other websites, we encourage you to watch through legitimate sources so that we can increase the chances of this show getting a second season or OVA’s.  The stronger its ranking is through official channels, the better chance we have of getting more!  Crunchyroll provides the episodes for free with ads, as well as free trial subscriptions of their services.

How do I chat with other watchers?

Watchers will be using the hastag #YuriRewatch to communicate with one another.  You can follow official posts on the Geekiary twitter account @TheGeekiary and follow along with the hosts running the rewatch, admin @angel_ponders and contributor @ExorcisingEmily.  We’ll be acting as hosts for the party so feel free to tweet questions to any of those three accounts.

One thought on “Yuri On Ice New Year’s Eve Gala”