An Interview with Johnny Weir: His Thoughts on ‘Yuri on Ice’

Yuri on Ice has become the unexpected smash hit online; a sports anime that delves into the high-pressure world of competitive figure skating, offers multifaceted characters with believable motivations and flaws, and delicately wove throughout the first season a respectfully handled, beautifully portrayed LGBTQ+ love story.  While the show has all the right elements to hook an online fandom, it’s been a surprise hit among professional figure skaters as well.

We had the opportunity to speak to three-time US champion, two-time Olympian, and World bronze medalist Johnny Weir about the show, after he caught up on episodes while on the road commentating on the ISU Grand Prix of Figure Skating.

To say we’re excited about his involvement in the fandom would be an understatement: the show has paid tribute directly to Johnny, and his interactions with the showrunners and live-tweeted impressions on Twitter have been delightful so far. Beyond that, Emily has been a fan since Johnny exploded onto the figure skating scene in the early 2000s, and Angel is a recent convert to Johnny’s fandom, brought in by Yuri on Ice. We’re honored that he took the time to speak with us!

ANGEL: You originally said you’d limit yourself to one episode per day, but then watched the first ten episodes over 4 days. What brought you into Yuri on Ice, and what about this show made you break your own rule and marathon it so quickly? 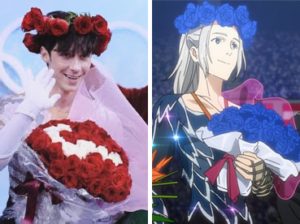 JOHNNY: I became familiar with Yuri on Ice after I started to see people tweeting about the show. In general I don’t have a lot of time for entertainment so I am usually years behind the rest of the world when it comes to “new” things. However, when Evgenia Medvedeva tweeted that she thought Yuri’s Eros was similar to me, and the photos of Viktor’s rose crown, I had to watch.

I broke my rule about one episode per day because I physically couldn’t stop watching. I love figure skating, its funny little world, and Japan, so even watching the first episode made me feel so at home and happy.  There are so many details about the show that I can relate to, even small things like spending time in onsen, Japanese train stations and so on, that the show is visually filled with happy memories. I am now caught up and agonizing of the Grand Prix Final free skate with the rest of Yuri’s fans.

EMILY: Director Sayo Yamamoto credited you for capturing their interest in figure skating with your performance of Poker Face, and you’ve clearly been an inspiration to the story itself. How did it feel seeing the show pay tribute to you by having Victor at the top of the podium in a version of a costume you’d designed for the 2006 Olympics, and the flower crown you sported at the 2010 Olympics?

JOHNNY: There are so many parallels that I’ve noticed while watching the show. I changed coaches and competed in Cup of China and Cup of Russia when I was 23 and trying to reinvigorate my career like Yuri-kun. My junior world championship victory was in Sofia, Bulgaria like Viktor. I even was one of the first skaters who traveled with my own special tissue box starring my favorite cartoon, Cheburashka. Of course, the homage to my Swan costume from Torino and my rose crown in Vancouver from one of my dearest fans, were very special moments in my life and I’m so happy to see them show up now in a show I love.

I am very honored that the production team has taken some inspiration not just from me, but from the skating world. There are so many details that pop up that wouldn’t mean anything to a casual skating fan, but to us as skaters who actually lived it, you can see so much respect for our world and what we do through the animations and story lines. Even down to the way certain hotels look. It’s very special.

ANGEL: What’s it like to watch a fictionalized version of events you’ve experienced. Does Yuri on Ice feel like a loving representation of the sport? (And what about those banquets? Any infamous dance-offs we need to know about?)


JOHNNY: It definitely feels like a very knowledgeable and loving representation of the skating world. The producers definitely took their time to be sure that every detail was right. The fact that there are so many details makes it seem like the entire team was at events with us, backstage, in hotel rooms, at the banquets and so on.

At the banquets, it’s rare for the skaters to get very drunk. Usually the banquets are time spent between the whole skating family, coaches, judges and federation officials, so drunken dance-offs would be pretty inappropriate. The drunken dance offs happen in the hotel rooms once all the old people go to bed.

There have been many strange moments watching a fictionalized version of our world, so much so that I’ve had times when I say to myself, “Who told!?”  There are so many secrets in in the show that only skaters or people very close to them, would know about. Sometimes a character will remind me of a dirty little secret that even hardcore skating fans don’t know about, and while it may not be completely played out in the show, the pink elephant has entered the room.

EMILY: You stated on Twitter that things would have been different for you as a 20-something skater, with a show like Yuri on Ice on the air. Now we’re seeing current competitors and legends like yourself embrace the show. Do you think that the show’s LGBT themes and depiction of a world where queer athletes are celebrated for their abilities without bias could have an impact on the culture surrounding figure skating?

JOHNNY: Well, my tweet was more based on sitting in onsen with your Russian skating stud crush than the show being on while I skated. Haha.

I think all positive imagery of LGBT themes in sport are good. Unfortunately, the majority of people that rule the skating world are conservative and more business minded. I think many of them, while they may love and appreciate the art and the sport, are more interested in the business side of things or power trips. I don’t know if “Yuri on Ice” will be able to change the perception of gay athletes to a 60 year old businessman, but I am of the school of thought that every little bit helps.

When I was competing, despite being very gay, I wanted my skating to speak for itself and have it judged purely on merit not on the circus that is me. Being gay had as much to do with my performances as muscle cars or giraffes. I dedicated my life to my sport and wanted to be judged and appreciated for my performances alone. I like seeing that quality from Yuri-kun too.

ANGEL: As the sports commentator for the GPF, if you were going into it with these characters/competitors, what would you hope to see?

JOHNNY: I obviously want Yuri-kun to win! What’s fun about Yuri’s Grand Prix Final is that I can be completely biased in my hopes for the event. Yuri and Yuri are my favorite skaters in the group so I hope for their successes. I don’t want to give away spoilers because there may be people who haven’t seen the episodes yet.

I tweeted about my feelings about JJ and Chris and the fandom got upset with me, especially about hating Chris. The production has been so good that these fictional characters actually remind me of people I did not like in my own career so I think it’s completely organic and natural that I don’t like those characters.  Chris in particular annoys me because, aside from on-ice orgasms, there is so much about him that reminds me of several bitter rivals of my own. 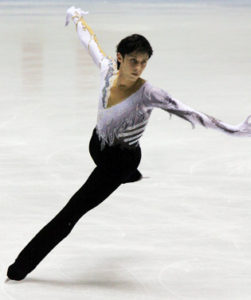 EMILY:Retired ice dancer Kenji Miyamoto choreographs the performances for Yuri on Ice, and has done choreography for you in the past. If you could choose one of the characters’ performances this season to skate yourself, which would you choose? Why?

JOHNNY: I could tell from the first opening credits in episode one that Kenji-sensei was involved in “Yuri on Ice”. The choreography looked like Kenji-sensei’s. He is wonderful and I’m sure he’s giving a lot of secret stories to the production.

If I could choose one performance to skate that would match me, I would definitely say Yurio’s “Agape”.  It is totally my style.

ANGEL: What is your overall take-away from Yuri on Ice: any final comments or impressions?

JOHNNY: I never thought I would take the time to watch an anime series, despite appreciating the art form. “Yuri on Ice” feels like home to me, and it really inspires me and makes me so happy that there is such a wonderful worldwide response to the show. Yes there are skaters that watch it, but we always tend to support anything about our sport. What is truly magnificent is that people who know nothing about skating are watching and becoming aware of our world and for that, I am very thankful and humbled.

You can catch Johnny on NBC Sports at the real Grand Prix Final on December 18, before tuning in for Yuri’s GPF during the finale on December 21!