Johnny Weir Is Going to Watch Yuri on Ice, Everyone Is Excited 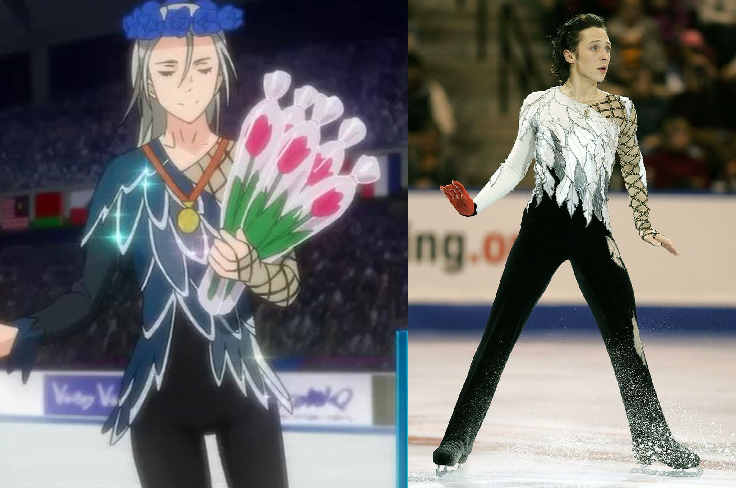 News that Johnny Weir was going to tune into the popular anime show came from the man’s social media feed itself.

I love when I look at my plan for next week and it says things like, “Start watching Yuri.” pic.twitter.com/NSIiNgMuac

His decision to tune in is extra exciting as the show paid specific homage to him in the seventh episode, when we’re shown a flashback of the character Victor Nikiforov.  The younger version of Victor is wearing an outfit reminiscent of 2006 Olympic SP costume.  The flower crown and bouquet is also a homage to his 2010 Olympic appearance.  The similarity was pointed out quickly by fans on both Twitter and Tumblr.

One specific Tumblr post puts this in some enlightening context.

Figure skating is a surprisingly homophobic sport, in part due to how flamboyant that was. So much so that young gay men are openly harassed and gay women even worse so. Johnny Weir was repeatedly called Johnny Queer publicly by spectators, coaches, other skaters, etc. Judges were unbelievably harsh on him, even if he had a technically perfect program (which, he often did). Why? Because he was flamboyant off the ice just as much as he was on. […]

[If] you knew anything about skating and the politics behind it, you would know that this show is breaking down huge barriers, and not just in the Japanese culture, but an enormously international one as well. Paying tribute to an icon like Johnny Weir isn’t just a tribute to figure skating, it’s a tribute to the LGBT+ community, however subtle it may be.

Yuri!! On Ice has been ground breaking for queer representation in anime.  It made a queer ship canon, despite not being a yaoi/BL show.  It plays with gender in an interesting way and breaks down boundaries.  It’s hugely important and the popularity is well deserved.  The homage to Johnny Weir drove this point home, but him taking notice is thrilling.

Johnny Weir isn’t the first figure skater to take note.  Russian skater Evegnia Medvedeva, the 2016 World Champion, is so enamored that she cosplayed as Yuuri Katsuki.

American skater Ashley Wagner, the 2016 World Champion silver medalist, found a character that looks like her.

It’s incredibly exciting to have actual figure skaters be part of our fandom.  But having Johnny Weir take an interest is a whole different level.  I hope he enjoys it, especially the direct homage to him.  Boundaries are being broken and he was definitely part of that.