Rogue One: Dark, Gritty, & Reminiscent of The Empire Strikes Back 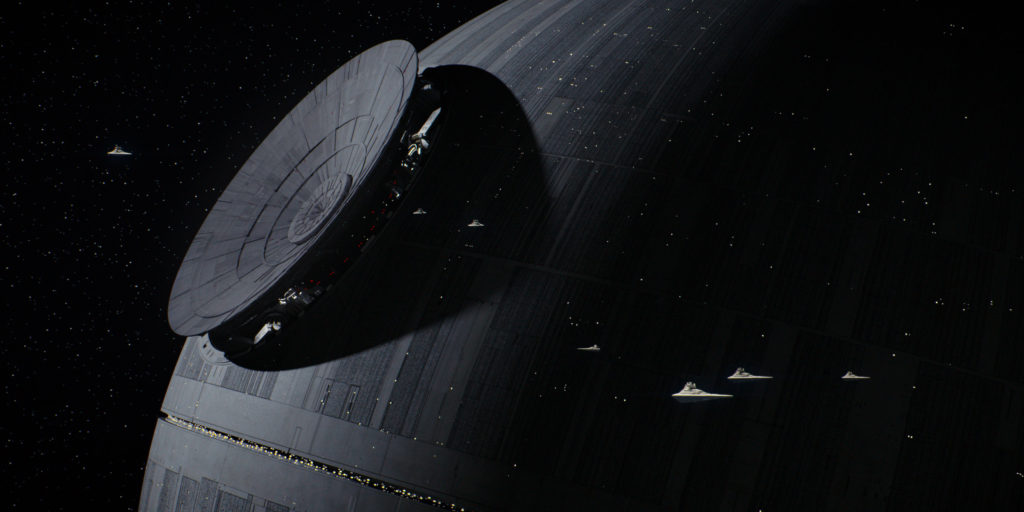 Let’s be honest: Star Wars hasn’t always done the best job of telling a story to which we know the ending (see the prequels). Yet in Rogue One they did just that, and while it didn’t give me quite the sense of amazement that I felt when I saw The Force Awakens, there is no denying that it is a success in nearly every respect.

WARNING: This review contains *massive* spoilers for Rogue One: A Star Wars Story.
Read at your own risk!

I’m one of those people who went into this film without any real expectations, though at the very least I knew that I would be hard-pressed to not enjoy it. In fact, I’ll admit that when I first saw The Phantom Menace in theaters as a fresh-faced sixteen year old, I was so excited to see a new Star Wars movie that I enjoyed myself then, too. Obviously that film did not stand up to itself, let alone the rest of the series, on later viewings…but thankfully Rogue One doesn’t feature Jar Jar Binks or wee Darth Vader or an awful midichlorian backstory or a ridiculous pod race. No, Rogue One is the opposite of that; despite several decent attempts at humor, it’s a darker, grittier Star Wars story, one that is in many ways reminiscent of The Empire Strikes Back. 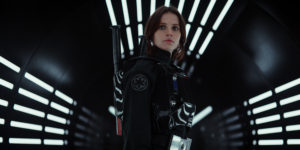 But I’m getting ahead of myself. I mentioned that Rogue One was successful in *nearly* every respect, and I mean that. There were characters I didn’t care for and moments that made me roll my eyes; thankfully, they were few and far between. Probably the biggest question I have is why they did such a weak job portraying Forrest Whitaker’s Saw Gerrera. I don’t believe that this was any fault of the actor – it just seemed like they left out important information, and on top of that, what little we did find out, they told us when they probably should have showed us. I felt no connection between Saw and Jyn despite the fact that he “raised” her, and I honestly didn’t care when he died. I know that this character appeared in the Clone Wars TV show, but for the purposes of Rogue One I don’t really think they utilized the character or the actor as well as they could have. 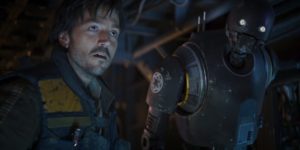 Of course it definitely helps that once again this new Star Wars era scored with a droid (and while I did love the little C-3PO and R2D2 cameo, no, that’s not what I’m talking about). BB-8 was obviously a fan favorite in Episode VII, and I have a feeling that K-2SO is going to be that for Rogue One. At times his quips were a bit over the top, but he stopped just short of being on the C-3PO level, and yeah, my throat tightened a bit when he was taken out. The only other time I felt that way was when Jyn and Cassian met their fate, and even that was more because those characters had accepted it, I’d accepted it, and it was just a beautiful ending for the film’s heroes.

Speaking of beautiful, if this hadn’t been Star Wars I would have absolutely loved the score…but it is a Star Wars story, and it’s the first Star Wars *movie* where the music wasn’t by John Williams. Therefore, what otherwise would have been impressive seemed lacking at times, though the classical style overture used when the Star Destroyers crashed into the Scarif shield generator was admittedly absolutely perfect.

Probably the biggest issue with Rogue One was that the beginning was more than a little bit slow. I was surprised to find that I didn’t mind the fact that there was no opening crawl – I actually feel like it would have been out of place – but the first twenty minutes or so included a lot of planet-hopping and exposition that spoke of a combination of weak editing and writing. Thankfully, after that first twenty minutes, the rest of the movie featured a great balance of action and politics – both Empire and Rebellion politics, at that, even if the Empire scenes were a bit predictable and the Rebellion scenes were more than a little frustrating. 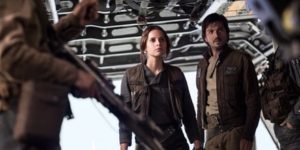 When it comes to the ragtag group of rebels that were featured in Rogue One, I sadly found Cassian and even Jyn Erso forgettable. Not that I didn’t like them at all; the problem is, we basically didn’t know anything about Cassian, and what we knew about Jyn was so close to the already kind of overdone Star Wars orphan/pseudo-orphan plot. Between that and knowing that she was probably-almost-definitely going to die, I found it hard to truly *like* her. I know that’s likely going to be an unpopular opinion; in a world where we need more strong female characters, she certainly fit the bill! But like Rey and Luke before her, she was saddled with that aforementioned orphan/pseudo-orphan plot that I was really hoping they would finally move on from with this movie. At least she wasn’t Force sensitive, I guess? That was probably the best thing about Jyn Erso – her struggles were very human ones (even if a lot of her speeches made for some of the cheesiest moments of the film). 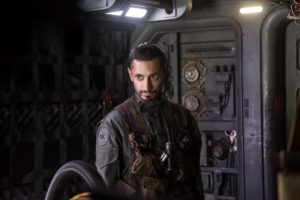 I was, however, pleasantly surprised by Bodhi, the Imperial pilot who defected thanks to Jyn’s father Galen’s inspiring words – though why he and Jyn never had a single conversation about their shared love of Galen, I’ll never understand. I also wish we’d seen a bit more of Bodhi and a bit less of Chirrut, if only because I think Rogue One would have fared better without at least a dozen of those “the Force is with me and I am one with the Force” recitations. And while I admittedly raised my eyebrows a bit at the Tarkin and Leia scenes, they were actually handled quite well, as were Darth Vader’s final moments on screen. I only wish that his earlier conversation with Krennic had been as perfect; I mean, since when does Darth Vader throw out puns?

The biggest highlights of Rogue One, though, were the combat scenes – the closed-in street confrontation on Jedha, reminiscent of so much of what has happened in the Middle East in the past several decades; the beach scenes that were clearly modeled after World War II Pacific conflicts; and above all, the absolutely perfect space battle above Scarif. Battles like that were the highlights of the original films, and for the first time since Return of the Jedi, I feel like I experienced one that was practically perfect in every way. 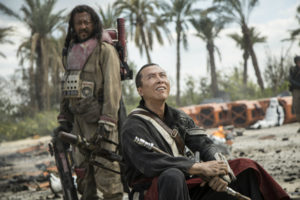 In the end, though, I’m not sure we were supposed to fall in love with the characters in this particular tale; rather, we’re supposed to root for the Rebellion as a whole. For those of us who have been Star Wars fans for a long time, I suppose it’s more like falling in love with the Rebellion all over again – unless you’ve never seen the original trilogy, you have to assume that most of the Rebels who go after the Death Star plans will die in the attempt, so the big question is whether or not Rogue One did justice to a story where we already know the general ending. The answer? Yes, yes it did.