Where Are The Baby Yoda Toys?

The cat is out of the bag on Baby Yoda. Official Disney and Star Wars accounts are posting about it. But there’s a startling lack of toys!

UPDATE: We are updating the bottom of this page with all new Baby Yoda merchandise news.  Scroll down for more information!

Everyone is completely enamored with Baby Yoda. Yes, yes, we know he isn’t actually Yoda, but the species has yet to be named and it’s easier than saying “Baby Who Is The Same Mysterious Species As Yoda.” When he showed up at the end of the first episode of The Mandalorian, he became an instant fan favorite. He’s too adorable for words and we are all dying from cuteness overload. 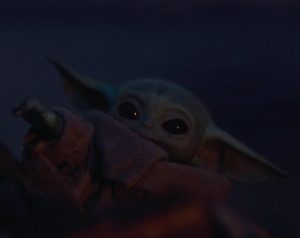 A lot of us were extra cautious to not spill the beans about the surprise character because it blew our minds going into it without knowing we were about to be slammed in the feels. We wanted others to experience the same, but now that Disney and Star Wars official accounts have made posts about them on social media, it’s open season to talk about the little fella.

This means the toys MUST be coming soon, too, right? Right? There’s nothing left to hide. Give us the Pops! and the plushies, please!

Toys can lead to accidental spoilers a lot of the time. When Captain Marvel was about to release, there were Goose-Flerken toys everywhere. Sure, if you read the comics this wasn’t much of a spoiler, but it confirmed that Goose was based on Chewie from the comics.  For non-comic readers who had no idea he was an alien with weird tentacle-like things coming out of his mouth, it was a pretty big spoiler. A toy also spoiled the Professor Hulk reveal from Avengers Endgame. This is a thing that happens now.

Perhaps they had the lid sealed so tightly on this that they haven’t even sent anything Baby Yoda into production yet. Things tend to leak. All it would take is one person on the production line spilling the beans to a friend and it’d have gotten out into the world. Sure, some of us can keep some secrets, but the temptation to run off to Reddit and spread this super cool top secret info we found is strong, man. It’s so strong.

There’s also the possibility that the merch has been sent to production, but it may contain the character’s name or species name, neither of which have been mentioned in the show. I somehow don’t think our collective fandom moniker “Baby Yoda” is going to be the official title. Unless he’s a literal clone or something… which, I mean, that’s a thing that can happen in Star Wars so maybe. But probably not? Probably?

That one dude did have a Kamino patch on his costume, but I digress…

If the name is what’s holding back the potential toy release, I hope it’s revealed soon or we may miss the holiday season altogether. The last episode won’t be released until two days after Christmas, which means that if they drag out that reveal and it holds up toys, they could miss the holiday season entirely. And missing out on millions (billions?) of dollars in toy sales doesn’t feel very Disney.

Disney has already started rolling out merchandise for the new series, including charming The Mandalorian Pop! figures, but Baby Yoda is still missing, likely for one of the above-aforementioned reasons. But if they want to get a jump on the holiday season, they are going to have to start rolling the toys out stat.

I have a Secret Santa list due at my work on Friday and there’s nothing Baby Yoda related on it and that’s a damn shame.

UPDATE November 25th, 2019: First Merch Is Out! Baby Yoda T-Shirts on Her Universe.

UPDATE November 26th, 2019: More Merch! This time from the Disney Store and Hot Topic (Update to the Update: and a few others now!).