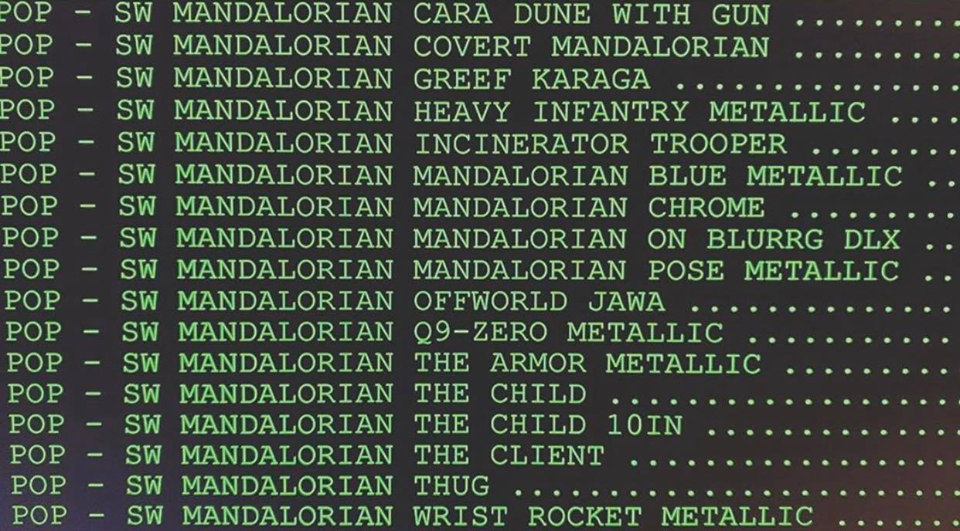 Guys!  It’s time!  We might be getting some Mandalorian Baby Yoda Funko POP! dolls, and we’re all about to be super poor real fast.

There has been no official announcement for a Baby Yoda Funko POP! doll at this time, but an image of a point of sale list of upcoming POPs! seem to indicate that ‘The Child’ is on the way soon.  Listed items include both ‘The Child’ and ‘The Child 10inch’ which oh my god that’s basically life size.

In Update #2, I was assuming this type of stuff is delayed because it’d reveal the child’s true name, but it looks like they are just running with the casual title for now.  Sadly, this means there’s legitimately no excuse for Disney to not be further along with releasing merchandise that doesn’t look like it was ordered off of CafePress.

Speaking of the CafePress looking shirts and mugs, we’ve gotten a few more pictures available besides the one piece of concept art (see: 1, 2), but it’s fairly less than impressive.  It’s good to have options now, and I’m sure I’ll end up with one or two of these shirts or tanks at some point, but it’s rushed and low quality and I expect better.  So far fans are creating higher quality work than anything officially licensed.

The information on the POP! is very sparse.  So far we legit only have that screen shot from a point of sale terminal.  We have no pictures of the merchandise or prices or even an estimated release date.  We don’t even know what store the screen shot is from.  It’s been passed around through several Funko POP! fan groups at this point, and I don’t even know the origin of it anymore to ask where it came from.

But we’re keeping an eye out on all things Baby Yoda merch!  So stick around and we’ll share more.