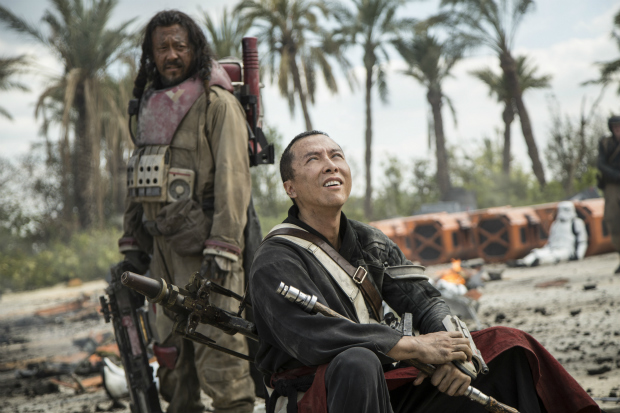 I agree with Jyn Erso not being dragged down by a romantic subplot in Rogue One: A Star Wars Story. What I don’t agree with is saying that Rogue One didn’t have any romance at all.

The article contains spoilers for Rogue One. Proceed with caution. May the force be with you!

When I first started reading Teen Vogue’s article about Jyn Erso not needing a romantic storyline, I was okay with it. However, as I kept on reading I realized that the article started talking about ‘romance’ in general to set Rogue One: A Star Wars Story apart from the rest of the titles in the franchise.

In this new film, the need for romance simply does not exist. And honestly, it’s pretty refreshing.

That’s the line that got me typing this out. Furthermore, it also mentioned how shippable Finn and Poe Dameron were in The Force Awakens. If ships are to be taken into consideration, why didn’t the article mention Chirrut and Baze? If those two weren’t space husbands I don’t know what they were.

I get that Jyn wasn’t forced into a romantic subplot, but then again she wasn’t much of a character to begin with. To a lot of us at TheGeekiary she felt like a literal plot device. The story used her to get to the places it needed to be. She was more or less a skeleton key for the Rebellion with no concrete background or strong motives for her actions to make sense.

Want to get to Saw Gerrera? Let’s take Jyn. Want to reach Galen Erso? Find Jyn. The Rebellion won’t fight? Jyn will lead a mission. How to destroy the Death Star? Jyn knows it has a weakness.

So, I fail to see how she was able to “define the movie on her own terms.”

Check out the video below to know more about what we thought of the film and Jyn as a female lead!

Also, the article went on to state that:

And while it’s common to try to look for signs of flirtation or tension between two characters playing opposite one another, it’s important to recognize when those things simply aren’t there. Just because there’s two characters sharing a lot of screen time together in a movie does not automatically signify a romance (just like when two celebrities share a meal together, it doesn’t mean they are dating).

First of all, if one wasn’t looking for “signs of flirtation or tension between two characters” then Finn and Poe wouldn’t be a ship, which the article mentions. Also, that final scene where Cassian and Jyn held hands and embraced as they awaited death felt very romantic to me. Two characters don’t have to be kissing each other to make the audience see that there is a spark between them.

I agree with the whole “when two celebrities share a meal together, it doesn’t mean they are dating”. It applies to Jyn and Bodhi, or even Jyn and Baze. As for Jyn and Cassian? Nope, there was definitely something going on there.

Jyn and Cassian’s relationship was a romantic trope. It wasn’t very out there, but it was still present. The relationship had its basis in girl and boy not liking each other in the beginning and slowly building trust with time. It didn’t reach the final kissing moment but the link was there.

Even the director of Rogue One said that Jyn and Cassian had a very different ending before it was changed. With the way their relationship was developing, I wouldn’t have been surprised to see them kissing each other if the ending hadn’t been changed in the final product.

Anyway, I’m okay with people finding Jyn to be a strong feminist role model, with her not having a romantic subplot playing a role in her being considered as one. We are all inspired by different things. However, what I disagree with is Rogue One not having any romance and using that to set it apart from other films in the franchise.

One of the strongest romances in the film was between Baze and Chirrut. Similar to Jyn/Cassian, their relationship followed a romantic trope as well, but a different one. The Baze/Chirrut relationship is an example of the trope we get to see in a lot of fan fiction, where one spouse is always up for a fight (or taking action) and the other refuses but ultimately has to follow with a big sigh.

Baze and Chirrut didn’t have the final hugging scene that Jyn/Cassian had, but their goodbye was impactful, too. If the criteria of setting Rogue One apart from The Force Awakens had to do with shipping Finn and Poe, then it isn’t justified because Baze and Chirrut are shippable as well.

As far as I’m concerned, Rogue One isn’t without romance. One can say that it was “refreshing” that the female character wasn’t shown experiencing drama due to being paired with a male character. However, saying that Rogue One is different from the rest of the franchise because it doesn’t have any romance at all doesn’t hold merit for me.

What do you think? Did you feel that Rogue One was without romance? Let us know!

2 thoughts on ““Rogue One: A Star Wars Story” Has Romance But It Isn’t What Most People Might Have Expected”