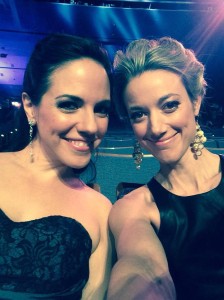 The Academy of Canadian Cinema and Television (ACCT) held its annual Canadian Screen Awards last night to honor the very best in the Canadian film and television industry. Shows like Call Me Fitz, Orphan Black, and Flashpoint all took home top honors as expected. However, it seems that what all the Twitter buzz is about is not who took home what trophy but that Actress Zoie Palmer from Lost Girl took the time to come out during a brief acceptance speech for the Academy’s Fan Choice Award for Favorite Canadian Screen Star. She openly thanked “my incredible partner, Alex, and my beautiful son Luca.” There has been some speculation that she was in a relationship with Alex Lalonde, a Canadian film producer, for some time. This seems to put those speculations to rest. The son, Luca, is Lalonde’s son from a previous marriage. 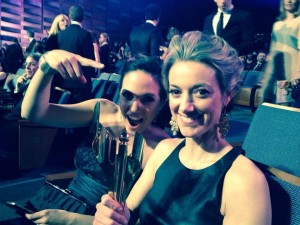 Anna Silk and Zoie Palmer took the stage together to present at the Canadian Screen Awards show and spoke candidly about their fictional relationship (Doccubus) on Lost Girl; even joking that there needed to be more sex between Bo and Lauren, that is if Bo could take a break from kicking bad guy asses and sleeping with Dyson.

It was funny, it was classy, it was normal. What I found extraordinary was that these two women and this little show have taken over the Canadian (and the worlds) fan base; and from what I can see, they don’t plan on letting go anytime soon. Bravo to the ACCT for being brave and forward thinking enough to have these two present together and to award them their Fan Choice Award with pride.

Performance by an Actress in a Supporting Role
Sarah Gadon – Enemy