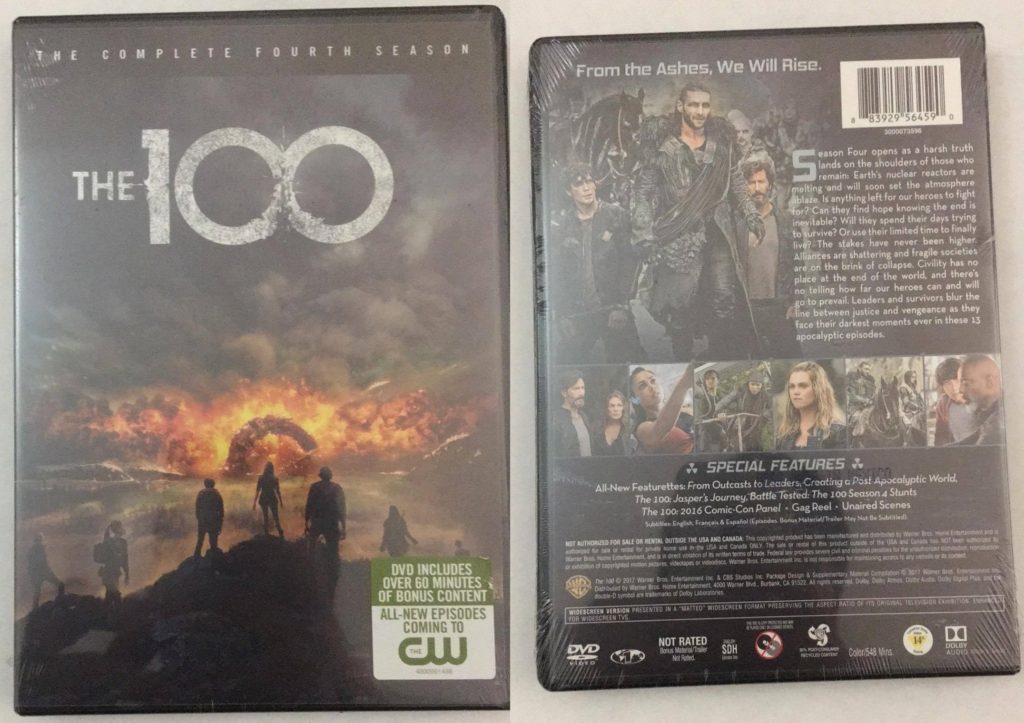 The fourth season of The 100 brought a lot of changes and fans can rewatch all of the episodes and enjoy extra features with The 100: The Complete Fourth Season DVD set.

I was provided a review copy of The 100: The Complete Fourth Season DVD by Warner Bros. Home Entertainment. The opinions are my own.

For those of you who don’t know, The 100 is an enjoyable post-apocalyptic sci-fi drama series. It is based on the book series by Kass Morgan. Produced by Jason Rothenberg, it airs on The CW. Since its premiere back in 2014, the series has gone on to amass an impressive fan base. The show has been renewed for a fifth season so you should start binge-watching to catch up if you haven’t already.

Here’s the official synopsis for the fourth season of The 100!

In the midst of death and destruction, relationships are put to the test as the 100 fight for their very existence. These heroes enter the fourth season at the epicenter of both the Grounder world and their newly founded homebase of Arkadia. After season three’s all-out war, a far more lethal threat has risen to the surface: Clarke has learned that Earth’s remaining nuclear reactors are melting and will soon set the atmosphere on fire. ALIE, the A.I. who launched the world’s nuclear missiles causing the apocalypse, was telling the truth. With the human race doomed to face an unbeatable enemy, Clarke and her allies amongst Arkadia and the Grounders must fight for humankind and all life itself. But with hope fleeting and the end inevitable, will our heroes spend their remaining days trying to survive… or finally trying to live? The stakes have never been higher, alliances are breaking, and the world is about to collapse. Civility has no place at the end of the world, and there’s no telling what lengths the 100 will go to in order to survive.

A lot happened during the fourth season of The 100 and that led to me enjoying the DVD release even more. It’s always fun to replay awesome moments from the episodes as many times as you want. Clarke is still going through tough times and not all of the characters are there for her. I did like seeing Bellamy’s character growth and I look forward to seeing what the fifth season has in store for him.

I won’t be repeating everything that happened over the course of 13 episodes here. So, feel free to check out our episode reviews.

Coming to The 100: The Complete Fourth Season DVD release, the packaging does have attractive artwork. The back has details about the fourth season along with a list of the enjoyable special features. There’s also a booklet that has the synopsis for each episode, air dates, credits, and more. The DVD release includes 3 color coded discs that have the main logo. This is a standard DVD release with good video (Widescreen Presentation Region 1) and audio quality (Dolby Digital 5.1 English and Spanish). The 100 has a lot of contrast between the gray of the outfits and the greenery of the jungle setting. That is why it was good to see that the video quality was crisp. Subtitles are in English SDH, French, and Spanish.

The unaired scenes are from the episodes “Echoes,” “Heavy Lies The Crown,” “A Lie Guarded,” “God Complex,” and “The Other Side.”

The 100: The Complete Fourth Season is currently available on DVD from Warner Bros. Home Entertainment. You can also own it on Blu-ray courtesy of Warner Archive, as well as on Digital HD.

Are you a fan of The 100? Already bought The 100: The Complete Fourth Season DVD? Let us know.